I am sure, like me, looking back over the last three days of lock-down, life seems to be going really slow!!  It was only on Monday evening that the government announced the UK lock-down!  Feels like so long ago!!  We are all going through so many big changes each day, it feels like a roller-coaster ride

This morning, on my daily walk on Arthur’s Seat with Honey the Dog, I decided it was time to write a blog about my reflections.  To get an account of some of the changes and share some other things that I have received.  But instead of spending time setting up a new website/blog page, I have decided to use my Beyond Belief Magic website.  I don’t have any magic work, so why not write it here!

The blog is not focusing on the doom and gloom about finances, work or the latest spread of Covid-19 that we hear/read daily on the news and social media.  But just my reflections on changes I have noticed, some interesting things I have read and some fun things people have shared.

Although I need a bit of a catch-up – so this Blog is particularly long!! (sorry).

It was the evening of Monday 23rd March 2020 that Boris Johnson announced a UK wide lock-down, we all suspected it was coming, but still, for me it sent me into a bit of a panic!  We were losing our freedom to do what we wanted.  I was taking a hire car back the next day and suddenly worried, if the company would be open to return the car?  Would the garage still be open for petrol?  Would I be arrested returning the car or filing it up with petrol?  Would I run out of food?  So many thoughts rushed through my head!  I jumped in the car and filled it up with petrol, it was less than an hour since the announcement.  I bought a loaf of bread at the garage and headed home.

As I lay in bed, feeling a bit calmer.  I concluded, that there would probably be no police patrols on the streets, as there has been so many cuts!!  With that thought I drifted off to sleep.

My day started similar to any other, a run on Arthur’s Seat with Honey the Dog.  Then a trip with the hire car to the hire company, which was open and then a walk back home, via the butchers.  Leith Walk seemed busier, with cars and people, than it had on Monday.  Still relatively quiet, but nothing too noticeable.  It was great to see Graham Cherrie butchers open, despite all the supermarkets that have been developed nearby, he is still going – it will be 38 years in July!  He even sold me 6 free-range eggs, although explained there was a UK wide egg shortage and so had no egg boxes – I got them in a paper bag!

My day seemed exceptionally busy, compared to normal,  With people phoning, chatting on social media, etc…plus a telephone interview with The Guardian newspaper about my self-employed predicament and my first large Zoom Meeting, with 15 participants (from around the UK), which I had been invited to join earlier in the day to listen and learn about Universal Basic Income.  It was a massive learning experience, learning the etiquette and exploring the platform – keeping your sound on Mute unless you are talking, putting up a virtual hand to say something and seeing the list of participants.

Although I looked at a lot of stuff on social media and the news, that day, the one thing that was a massive turning point in my thinking about the lock-down was this interview on LBC Radio – which you can listen to here – https://www.youtube.com/watch?v=tQD4B_hmdvo&feature=youtu.be

It’s an interview with an Intensive Care Consultant from Friday 20th March, before the lock-down  He was very upset as he described the situation in the hospital he was working in.  The words that struck me was when he was quoting an older gentleman and then continued with his own words (6.23 Counter):

“When we were in the war…people were lying about their ages and lying about their health so they could go into battle and fight and die for our country”.  The Consultant continued by saying “All we are asking is for you to sit on your sofa [and watch Netflix]…..” “The virus is not going to crawl under your door.  The only way you are going to get it is [if you go out]…the virus can only live if it can go from one person to another person, if that cannot happen the virus is finished, its gone”.

And then it struck me – it has nothing to do with if the police or government legislation can force us to stay indoors –
It is a moral responsibility !! 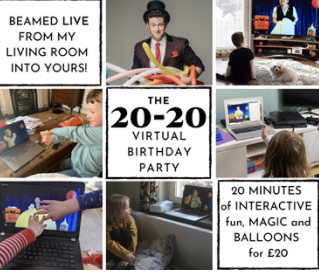 I always wake up listening to Virgin Radio and The Chris Evans Breakfast Show.  This morning I heard him get excited, as he looked out the window on (I think) the 7th or 17th Floor of a London Tower where it is broadcast – the excitement was that there was no more smog in London, instead he could see the outer smog of London in the distance, where there was more vehicles!!

I decided to go for a long walk on Arthur’s Seat with Honey the Dog (main photo of this blog).  Although, cloudy, it was a lovely day for a walk.  The place was super busy for 8am in the morning with runners, walkers and dog walkers, more like a Saturday late morning than a Wednesday morning.  What struck me was the stillness in the air, a presence – across the city and Leith.   It was as if, as we all rush around the city (before the lock-down) it creates an energy of rushing.  This was just not there.  It was absolutely beautiful !

Back home, another super busy day. First a Zoom Coffee with my magician friend, Gareth (aka Magic Gareth).  Usually we meet in George Street, Edinburgh – but Zoom Coffee worked really well.  Gareth is predominately a children’s magician and told me of his latest virtual venture ‘The 20-20 Virtual Birthday Party’…It is the solution to your cancelled children’s Birthday Party, where the party comes to your Living Room – More details – https://www.magicgareth.co.uk/20-20.

The rest of the day continued to be very busy.  With social media chat, more phone calls, emails, etc…and teaching my mum how to use Zoom (via a telephone conversation) so she could do her first Zoom Pilates!  She is not very computer literate – so in the end I set up a Zoom Meeting with her, so she could work out how to connect, sound, video, etc…Just before the Pilates she was back on the phone, in a panic as she could not get it to work – so I joined the Pilates class (for a few minutes) and talked her through what to do! 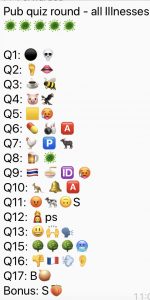 A great bit of fun shared on a WhatsApp Group through the day, was this quiz – see if you can work it out – answers to follow in another blog!

With The Guardian article being shared on Facebook later in the day, lots of comments, etc…and a telephone interview with The Daily Mirror!

And of course many conversations about the chancellors announcement to help the self employed which was to be announced by the end of the week.

I fell into bed exhausted!

This morning I woke to Chris Evans talking about how we are all quickly adjusting to lock-down!

I had such a lovely walk with Honey the Dog yesterday, today I decided to go for another walk, rather than a run.  Easter Road was so quiet, no cars, no people – at 8.20am in the morning.  It was so peaceful, it was beautiful.  I noticed, how I was able to be more present in myself.  And that the “chat” in my head was a lot less.  I concluded, this was because I am not having any physical contact with people (I live on my own with Honey the Dog) – and how I (or we) must give out so much energy every time we interact with anyone – that it takes it away from ourselves!

I also noticed, that people were walking so much slower.  Time seems less important now – we don’t “need” to be anywhere – in fact, our daily exercise is the only thing we have outside!

I noticed how much I love the fresh air – just being outside!!  It reminded me of the film ‘Twelve Monkeys’, which I watched twice one weekend about 2 months ago.  It’s about how the whole world has been virtually killed off by a virus and those still alive are living underground – with no fresh air.  It’s still available on BBC iPlayer (CLICK HERE) – but if you worry about your health at the moment, maybe not the best to watch!  If you haven’t seen it – it has a really interesting story of travelling back and forth through time. 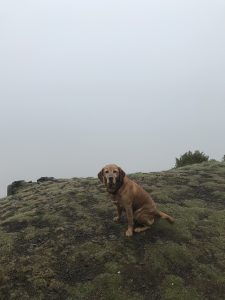 Today’s walk was very different to yesterday – same route, same time – but this time Edinburgh and Arthur’s Seat spent most the of the day sitting in one massive cloud!  So visibility was minimal (on Arthur’s Seat) and there was virtually no one out walking!

When I got home I read The Guardian newspaper and was drawn to how quite a few articles were reflecting on how this virus is going to change our lives and perspectives in the future.  A couple of articles, I want to share here.  One was talking about how nature is sending us a message with the pandemic and the climate crisis – https://www.theguardian.com/world/2020/mar/25/coronavirus-nature-is-sending-us-a-message-says-un-environment-chief

The other article on a similar note is called “It takes a whole world to create a new virus, not just china” – https://www.theguardian.com/commentisfree/2020/mar/25/new-virus-china-covid-19-food-markets 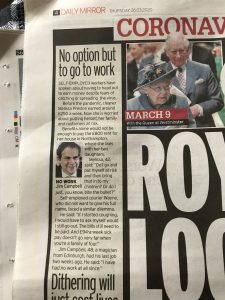 I also appeared in The Daily Mirror – just a very small article, with a photo of me.

The rest of the day, I was less focused on social media and didn’t watch the news at all.  Even the chancellor’s announcement to help the self-employed didn’t cause me much anxiety.

And the 8pm applause for the NHS Carers.  I think this should happen every day at 8pm.

So, as I come to the end of today – I reflect on where I am at after 3 days in lock-down.

There seems to be a kind of gentle silence transcending over me – despite, being busy at home in my flat – there is this bigger silence (its hard to explain), growing within me.  It reminds me of when I have done silent meditation retreats.  Or when I lived in Glasgow, was new to self-employment, had no TV (catch-up didn’t exist), little social media (didn’t exist) and didn’t have any Glasgow friends…so would go for many days not seeing or talking to anyone.

I have never really liked living in the city (even though I have been here for years!) – I love being out in the country, near the sea.  Its always feels, in the city, that the planet is trapped in an unnatural, human made concrete…screaming to get out.  But as soon I am out in the countryside and by the sea – everything feels OK.

But now, I am feeling that countryside feeling in the city!!!  It’s because of the stillness and silence.  Nature is beginning to appear in the city.  You can hear the birds…I heard a Wood Pecker this morning…you can smell the air!

I love being outside at the moment, it is so beautiful – I just stand there and notice.

“I hired Jim for a private student event in Edinburgh. And wow! What a night! He was highly professional and was the highlight of the evening by a considerable distance. Everyone there found him hugely entertaining and absolutely loved it. He’s an incredibly talented, skilful magician, with an endless range of mind-boggling tricks. Would certainly recommend him for any event!!”