On Saturday I had the pleasure of performing magic at Ed and Lindsay Neilson’s wedding at Summerhall, Edinburgh. 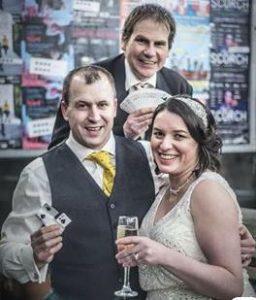 They had met me during the Edinburgh Festival Fringe in 2016 whilst I was magic busking at The Pleasance Courtyard – they were on their first Online Date.  Ed, later told me, he had said he would tip me more, if I could impress Lindsay – it obviously worked – as by the time I left them on that August evening, they were cuddling each other.  The signed playing card souvenir, which I had performed magic with, also brought them together as a memento of their first date together.

Their relationship went from strength to strength – and it was in 2017, that Ed proposed to Lindsay and she said yes!  As I had performed on their first date, they wanted me to perform at their wedding.  They weren’t sure how to get hold of me, but guessed I would be back performing at The Pleasance during the Edinburgh Fringe.  So come August they began searching for me with their friends without sucess.  They asked staff if they had seen me and were told I would be around performing later – but still I did not appear (!).  Eventually they found my profile on Facebook and sent me a mysterious message asking if I wanted to meet them. We met up in August 2017 and they told me their story. 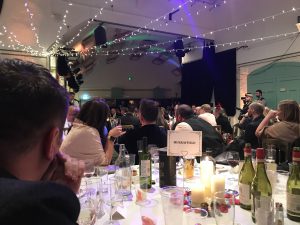 On Saturday (3rd February 2018), I was delighted to perform at their wedding.  I feel touched and honored to have been a thread running through their relationship from the start.  The story of them first meeting me, was told to guests during the wedding ceremony – so I had a bit of a ‘celebrity status’ by the time I started performing to their guests.

As, with most my magic performances – I had an fantastic time – meeting and connecting with lots of awesome people!

I was at the wedding as ‘Jim the Magician’ across most of the first part of the wedding and enjoyed some lovely food laid on by King Boar Catering.  I was also welcomed by some of the guests (Liam, Angie, Lesley, Kev, Dave, Kaylee and more) to sit with them during the wedding speeches at their ‘Murrayfield’ table.  I then stayed to the end of the wedding (as a guest) and danced to a fantastic band called Strange Bru.

Although, I perform at many weddings every year, this one was super special – as Jim the Magician played such a magical part for Ed and Lindsay.  I wish them all the best for the future, in their lives together.