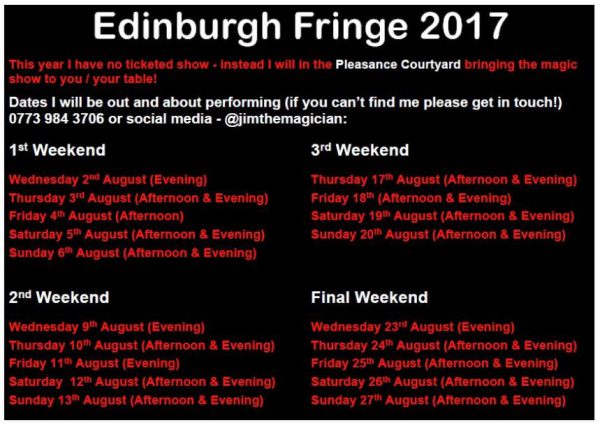 Yesterday was the official start of the Edinburgh Festival Fringe 2017, but I have actually been performing since Wednesday!  I’m back at The Pleasance Courtyard and have already performed, connected and met so many awesome people!

Over the last 7 years I have been bringing my magic to the people at The Pleasance Courtyard during the Edinburgh Fringe.  I ask for donations for my performance, as this is my ‘show’ (this year – I don’t have a ticketed full-length show).

Last year, I often got the response “sorry I don’t carry cash with me”.  So going with the times, this year I have an iZettle Contactless card reader (“Modern Busking” as one man called it!), so if you don’t carry cash on you or maybe you haven’t had time to get to a cash machine, don’t worry – you can still donate using Contactless, Chip & Pin or Signature!

My unique form of show, brings the magic to you and your table!

At the beginning of the week, I decided to look through all my Tweets and photos from previous years of busking and became quite moved by all the memories of the tables of people I have performed to.  I feel so honoured and touched by all the people I perform to from around the world – their reactions is so magical and stays with me.

Following the nostalgic trip, I decided to create a Photo Gallery of the photos.  And for this year I have created a separate 2017 Photo Gallery.  So all the people I perform to and love my magic, I take a photo and post on my website.  Once the photo has been taken I ask the table what caption they want to go below it.  Which marks the moment and the amazing night they are having.  The photos are fantastic – and captures the magic and excitement of everyone!   All the 2017 photos (so far!) are scattered through this Blog – with the captions below!!

If you are at The Pleasance Courtyard and hear shreaks, screams, cheers or late night chanting of “Jim, Jim Jim, Jim” – you are sure to find me nearby!!

And if you see me walking about and want me to come and perform at your table or with folk you are standing with please come and tell me – it’s a lot easier being invited to a table – then going up and asking people if they want to see some magic!

In addition to all the late nights and magic at The Pleasance Courtyard I was also performing at the Glasgow Science Centre, ‘Science Lates’ event last night.  It was lots of fun and I was filmed on Facebook Live – a first for me!   Check out my Facebook Page (www.facebook.com/magicofjim) to see me performing live for Facebook.

If you get the chance to go along to the Science Lates, do so.  It is an amazing, interactive experience.  The next one is at the beginning of September 2017.

Once finished at the Glasgow Science Centre I returned to The Pleasance Courtyard for some more late night magic.

Look out for next week’s blog and update on how it is going at Edinburgh Fringe 2017.

Hope to see some of you are at The Pleasance Courtyard in the next few weeks!!