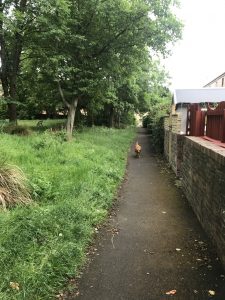 This morning when I woke up at 8.20am, Chris Evans was interviewing someone else on The Chris Evans Breakfast Show.  I now wonder whether every morning at 8.20am he interviews someone different?

This morning, he was interviewing someone he called ‘Dr. Nicola’.  She was responsible for heading an island’s Covid-19 response.  However, never mentioned where she was based.  Although, kept comparing it to the UK.  Afterwards, I did some internet research and from what I heard, she is based in Guernsey.  She is Dr. Nicola Brink, Director of Public Health.

She explained, that as soon as the virus appeared in Wuhan in January, she thought, that it could turn into a pandemic.  So they started planning straight away.  As Guernsey is a sovereign state of the UK, it has its own separate healthcare service and has responded to Covid-19 independently to the UK.

The underlying focus is “test, trace and quarantine” and a very stringent Test & Trace system.  Guernsey has a population of 60,000 and they had 35 people working all the time, 24 hours a day to test and trace very quickly and effectively.  If you compare that to the UK population, that is the equivalent of 38,500 people working on test and trace.

Guernsey is now virus free.  They have had no new cases for 35 days, completely eradicated and it seems that last night, they were all allowed to come together.  Hence the interview.

But she said they were already preparing for a second wave in the Autumn.

Within 24 hours of the first case being identified, they went into lock-down, following similar lock-down rules to the UK.

The main three points, that has worked for them is:

(2) Focusing on research and data.

(3) Community Engagement – building good relationships with every person who had tested positive.

Here’s an interview I found with her – https://www.itv.com/news/channel/2020-05-28/we-must-prepare-for-a-second-wave-says-guernsey-s-public-health-director/ 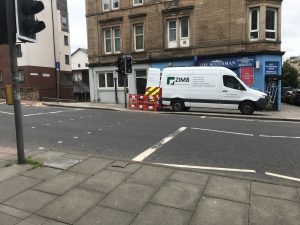 My day started pretty much the same, until my internet went down for about 45 minutes, just after Chi Gong.  Luckily, we had finished and were just talking at the end.  So I resorted to using my phone and 4G for a while.

When I headed out with Honey for her morning walk at 10.15am, I spotted a couple of cable communication vans at the top of my street and one seemed to be doing work, so I guess that was what was going on.  But by about 10.45am it was back on again.

At 11am, I headed along to Dalmeny Street Park, where there was some planting going on.  I am part of a community group of the park that is trying to improve the park conditions and make the park accessible and welcoming for everyone.

At the beginning of March, we had invited some children from a nearby primary school to come and do some planting, with the idea, that they could come back regularly to tender them, etc…But with lock-down this didn’t happen and very quickly it all got overgrown with weeds. 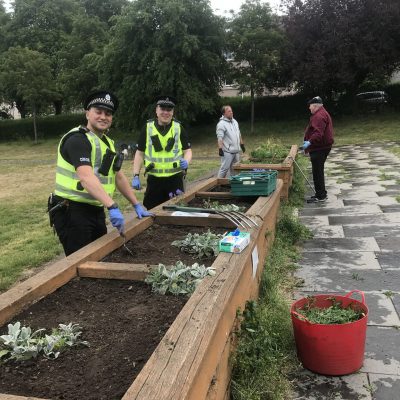 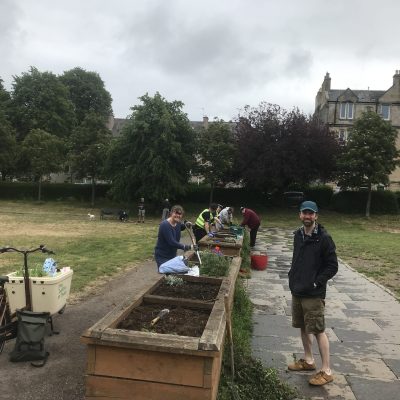 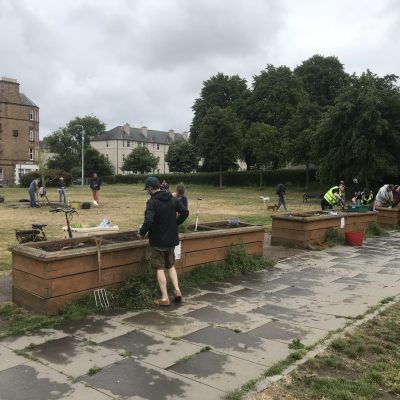 Luckily, a few different community groups have donated some plants.  So today, a group of us, came together to do some weeding (with gloves on and socially distanced) and plant some new plants.

I was there for about an hour and still the weeding and planting was going.  It was lovely thing to be doing and a great turn out. 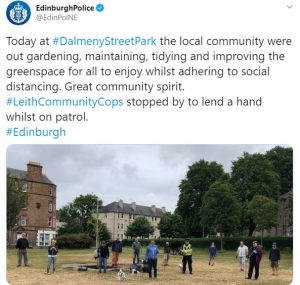 After than, I set to recording more of my blog for the online radio Deepness Dementia Radio.  I was doing Days 45-49.  This afternoon, I started to get a headache and feel a bit unwell.  I started to worry, if I had “the virus”.  I took my temperate a few times, throughout the afternoon with the two different thermometers I had, but it was fine.  Still not feel quite right – perhaps due to going to bed later last night?

I also decided to stop drinking my daily Kombucha, as I noticed it has loads of sugar in it and I have been confused why I have put on so much weight since lock-down started.  So it could be a withdraw from the Kombucha or sugar?  I’ll keep you posted! 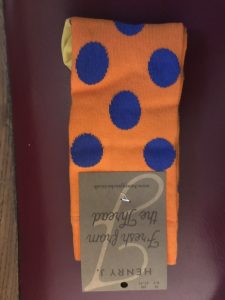 subscription for Christmas.  Generally you receive a pair of socks in the post every month for 12 months.  I loved it so much, that we got another subscription this Christmas!  I am now overwhelmed with socks!

Not feeling so well, Honey and I just went to Kate’s Park for our afternoon walk.  To find that Kate was taking a break and so we had a wee chat.  Which was nice.

Then home and had some food and then lay on the sofa for a rest, before starting this blog.

My sister Anna, wrote quite a lot for Readers Corner and included two photos as well.  One of which is a painting she has done since lock-down.  She has been doing some amazing paintings since she discovered her love for it during lock-down. 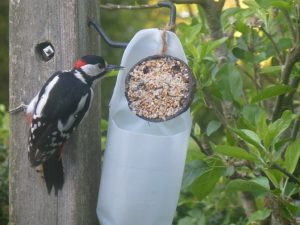 “It was interesting reading how you describe the passing of time and how it has been ‘ten weeks of pretty much the same things’.  My lockdown has been different.  The first week my children were getting used to school at home.  My eldest was meant to be doing GCSE’s so there were various ‘mock’ papers he had to do that might be submitted as evidence.

My husband was working at home, based in our sitting room so the children were in their bedrooms a lot of the time.

I was shielding and completely separate from the rest of the family.  I felt quite isolated and helpless.  My husband was working full time and having to run the house, doing all the cooking etc… 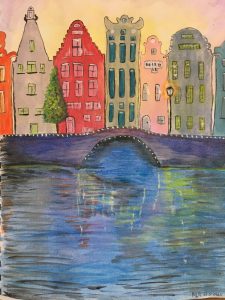 Then another transition when the children started home school again.  Three weeks into term another change as my husband then went on furlough.

By now I was spending a little time in the rest of the house so my husband and I had 2 weeks, before we all had a week off school and work as it was half term.  The fantastic weather meant that we spent a lot of time in the garden enjoying each others company with no pressure from school or work.

Now I am nearly back to how I was at the start of lockdown, my husband is busy with work again and school is back.  Although it’s not quite the same as my eldest is fairly free, having no exams to do and I am allowed to exercise outside my garden.

I have also discovered a love of painting, decided I quite like running and have got to know the birds in our garden well.”

Thanks Anna for sharing them.  I love the painting 🙂 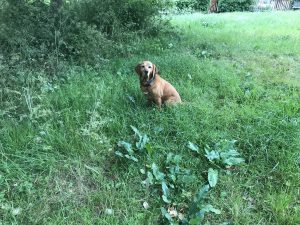 Kate (of Kate’s Park) was talking about yesterday’s blog and how she loves reading my blog – saying it is like getting inside my mind.

She was talking about yesterday’s blog and how she loved the idea that during lock-down we have had a kind of “Universal Connection”, whilst we are all going through the same thing together.

She also said how she has found how people she know have been able to say if they are not having a good day.

This is so true – I mean, the first topic of conversation in lock-down is “how are you doing in lock-down?” or if you haven’t seen them “how is lock-down going for you?”.

People are being more open about their mental health, recognising that we all have 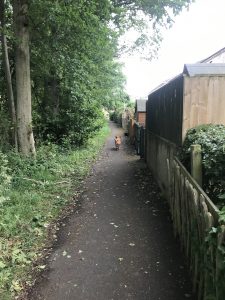 good days and not good days at the moment.  And that is OK.  There is an openness, which is new.  People are showing their more vulnerable side, which we often hide from the world.  It is hard to show your vulnerability to the world.

I completely agree!  It’s that Universal Connection that we all have.

She commented that she hopes, after lock-down, that people will continue to be open about their mental health, the and ups and downs in our lives, rather than hiding it

Me too.  I acknowledge that being open and honest can make one more vulnerable, but if we all do it, it may continue the universal connections that we had lost before lock-down.

As I come to the end of today’s blog.  It feels like another day has whizzed by.  I think, I am doing so much in my life, I don’t have much time to actually sit down and relax!  I must find a way to create more regular relaxing time in my life during lock-down.

It’s been really cold today – I was wearing my winter coat!

I had lots of fun in Dalmeny Street Park gardening, despite being in lock-down, we were able to come together as a community and connect.

I was talking with Mark, one of the Police Officers about this whilst we were weeding.  He was saying that he has noticed the connections that have increased between each other.  How people seem more caring for each other and looking out for each other. 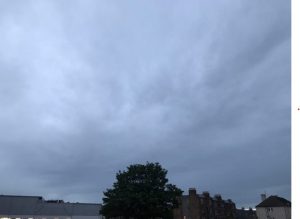 The vulnerable nature within us, is helping us connect more with ourselves and each other?

It’s bringing us all together on a humanity level – empathising with each other, as we could be the next who catches the virus.

I hope that this is one thing that will change in years to come, the deeper connection and empathy with ourselves and each other.