Today has been a full day and as I write this I feel exhausted!

The reason I decided to go so early, was to ensure at least some cooler time for Honey at the start of the day, before it got too hot.  Plus Portobello beach is said to get really busy in this hot weather.  But I had heard it doesn’t get busy until the afternoon.  So to avoid the massive crowds – we went in the morning.

It was Day 27 (19th April) that we were last in Portobello (to read about that blog – CLICK HERE). Today was our 2nd trip there since lock-down!

Like the last time, I jogged most of the way there, arriving about 9.45am.  However, unlike last time – I had a rucksack with 2 litres of water and Honey’s travelling water bowl, plus a towel if I went swimming!

As we came over the hill to see the sea, it looked stunning with the sun shimmering off the sea.  I tried to get some photos to capture the beauty of it, but it didn’t come out too well. 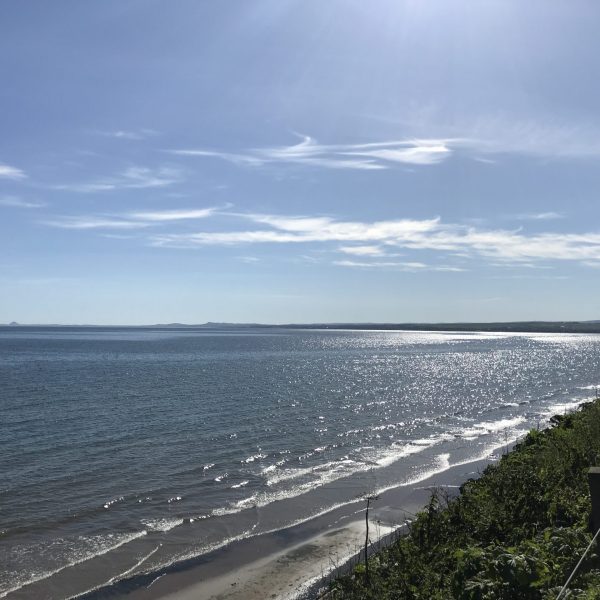 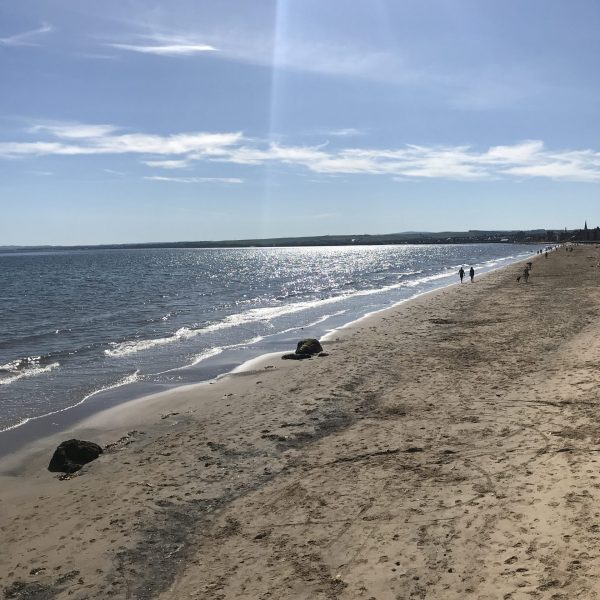 Honey was super excited as we got nearer the sea.  Jumping up on the wall trying to find a way down, to go swimming.  She seemed so happy.  She just loves the sea and swimming!

We finally got nearer the beach and she was in – jumping through the waves and swimming.  See video below:

It was pretty quiet, although still people out sunbathing, playing in the sand, etc…

As I walked along the sand, it really felt I was on holiday abroad somewhere.  The hot sun, walking in shorts and t-shirt and still feeling too hot, the warm sand between my toes, the smell of suntan lotion, the screaming of children playing in the sea, people out on their towels sunbathing getting ready for a day in the sun, it was not even 10am!  Even a family on an inflatable animal type boat playing in the sea!

We could have been on holiday abroad somewhere.  I thought back to the last time I have been on a beach holiday – and honestly can’t remember.  I certainly went to these holidays when I was younger.  But can’t recall any in the last 10 years or more!  Despite that – the memory was so very vivid.  It was lovely. 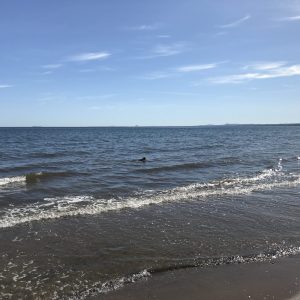 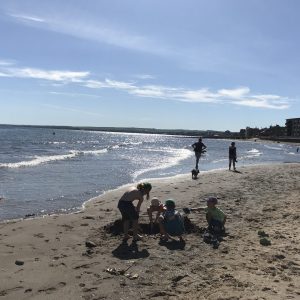 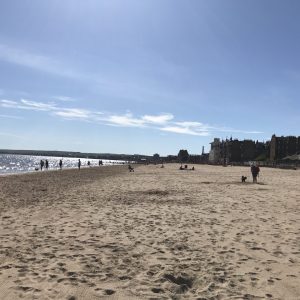 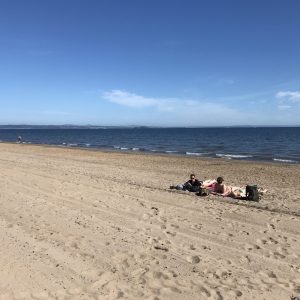 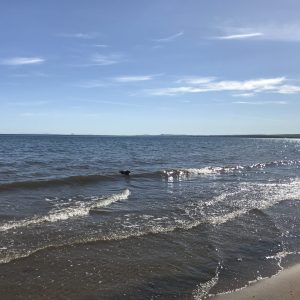 I started to think what “holiday” actually meant.  Does it mean travelling somewhere new?  Relaxing in a completely new environment?  Even though this was just a day-trip, it felt so like a holiday!

I just looked up the word “holiday” online, their are various definitions:

“a time when someone does not go to work or school but is free to do what they want, such as travel or relax”.

Well, that sounds pretty close to lock-down / furlough leave?!  Apart from being limited to do what ones wants – and not able to travel!

“A holiday is a period of time during which you relax and enjoy yourself away from home”.

Well that fits with this morning on the beach!  So I was on holiday 🙂

I headed to get an ice-cream, I hadn’t had breakfast, so that I could get running quicker – without having a full stomach!  Then text my friend John who lives in Portobello to say I had arrived.  We had arranged to meet up.  He appeared and got a Latte.

Then we walked along the promenade catching up, talking about lock-down and Portobello.  Plus sat down on a bench, socially distanced.

He told me he grew up in Rosyth and although lived in various parts of the UK and the world, found it interesting that in the later stage of his life he has returned to Portobello – 20 miles from where he grew up.  He told of stories from the late 1940s and 1950s of coming to Portobello for day-trips as a child with his family.  They would get the ferry across the River Forth, from North Queensferry to South Queensferry (before the Forth Road Bridge was built / opened in 1964).  They would bring their buckets and spades and go to the shop in Bath Street.  He chuckled as he now lives on Bath Street right next to the shop he would go to as a child (although the shop now long gone)!

Was lovely to hear these stories – especially as I wrote about them in my blog since I last came here (Day 27).

There was reasonable police presence on the promenade – a police van driving down the promenade and police officers walking along.  But no interacting, just a presence.  I recalled the last time I was here with the police on horses.  John said that was the only day they have done that since lock-down!  Wow – so special I got to see them. 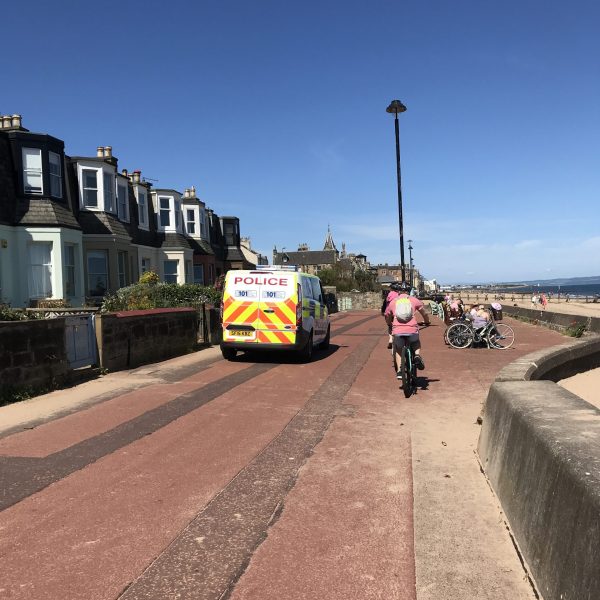 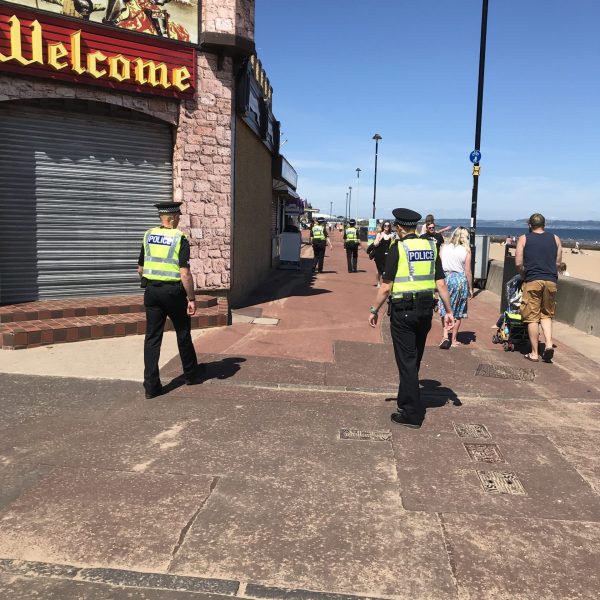 We past The Dalriada Bar and John said it was up for sale.  Not because of lock-down, just being sold up.  So we talked about what we have loved about the Bar.  The music nights on Friday evenings and Sunday afternoons.  John said one guy had his own seat and table – with a sign saying it was reserved for him.  In return he collected glasses and got free beer!

A growing group of us go along every New Years Day to have a swim.  There are usually about 300 folk who do it all together at a set time.  The first time we went there was just 2 of us (and Honey) in our group.  This year there was about 15.  Afterwards we sat outside The Dalriada (dogs not allowed inside) – had a drink and tried to warm up!

There is a lot of discussion amoungst the Portobello community on what the Dalriada will become.

Honey found a good number of her favourite Portobello delicacy – Seagull Wings!!  Just a note – you can’t buy these – she finds them on the beach, washed up from dead seagulls.  Chewing through bones, wings and all! 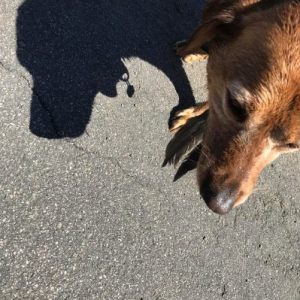 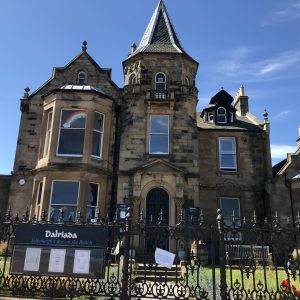 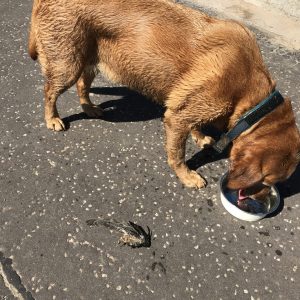 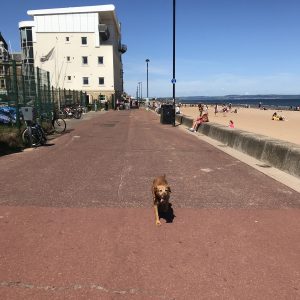 You can see one by her water bowl, that she dropped to have a drink. 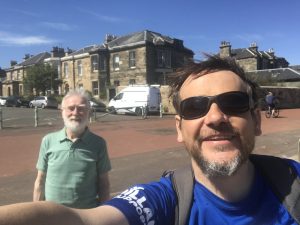 I took 2 litres of water with me – she drank the lot over the morning!  Well I had a few sips (from the bottle not the bowl 😉 )

Not only did she have her favourite Seagull Wings – she also delighted in licking ice-cream that had been spilt.

Then a social distance photos with John – my first since Freedom Friday.  In fact he was the first ‘household’ I have met since Phase 1 of exiting lock-down!

Then we walked back along to where John lived and we bid farewell.

I had thought about going for a swim – bringing a towel and everything.  Although up for it when we first arrived.  I didn’t fancy it later.  But I went for a paddle with Honey.  See video below:

The tide was going out, so it’s quite shallow.  Hence less swimming by Honey and more jumping!

By the time we were heading back along the beach, it was getting busier.  I tried to capture some photos – like yesterday – the camera is not so good at capture the number of people! 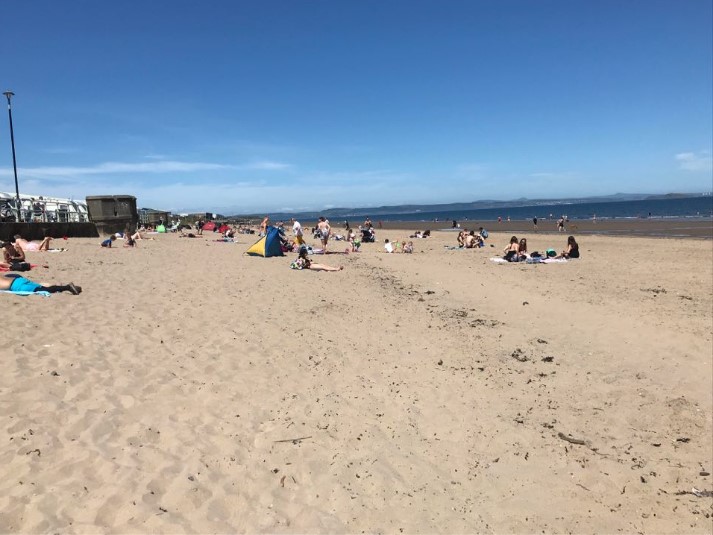 As I walked back along the sand, I found an elaborate sand castle – recalling that I had seen some children starting to build it a few hours earlier.  So below is a Before and After. 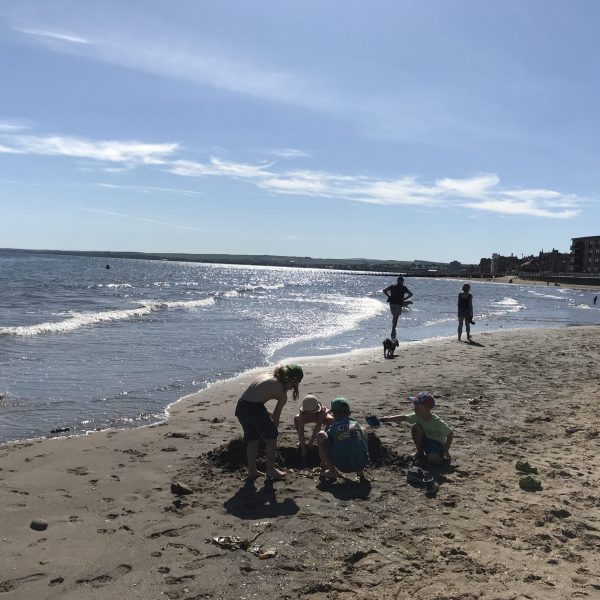 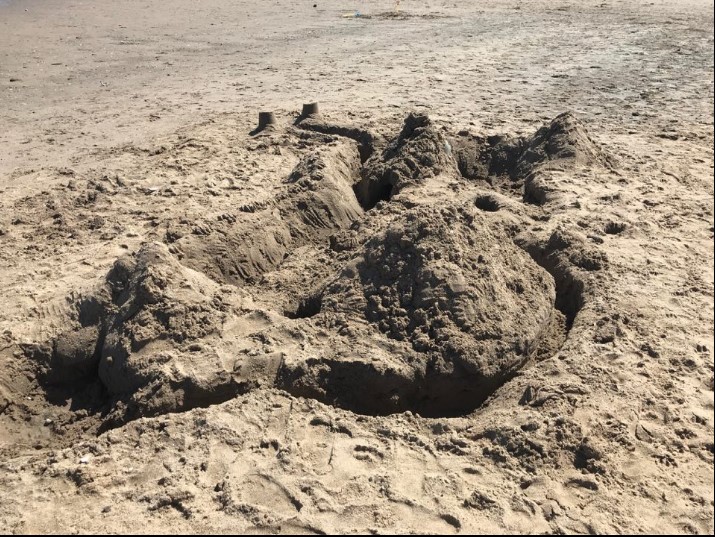 The photo of the massive sand castle has not come out so well!

Then a selfie with Honey in the Sea and we started walking back home. 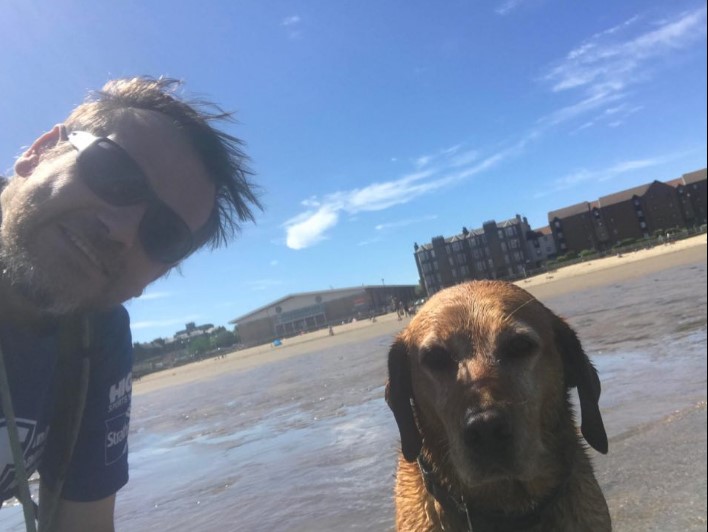 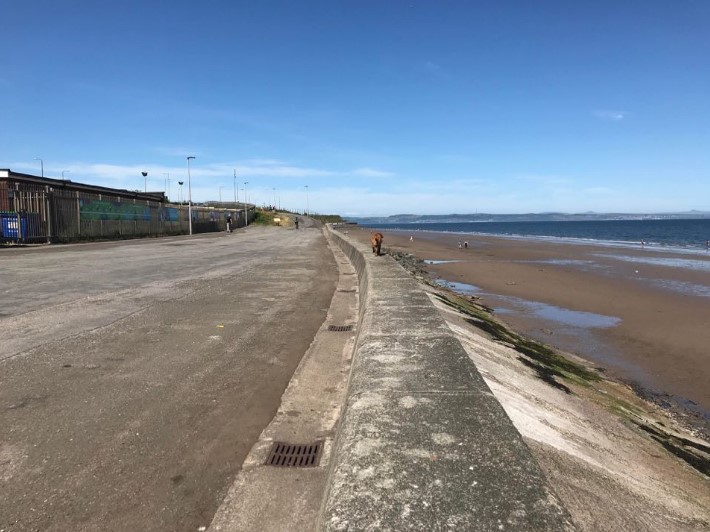 On the way home, we did more walking than jogging.  Stopping every 5 minutes or so to give Honey some water.  It was pretty hot and I was aware she had been outside for nearly 4 hours in the sun!

There were crowds of folk walking towards the beach – so I was glad that we had gone earlier in the day.

When we arrived home, Honey started rolling in the grass outside my flats.  She did that once before, when it was really hot and I wonder whether she does that to cool down? 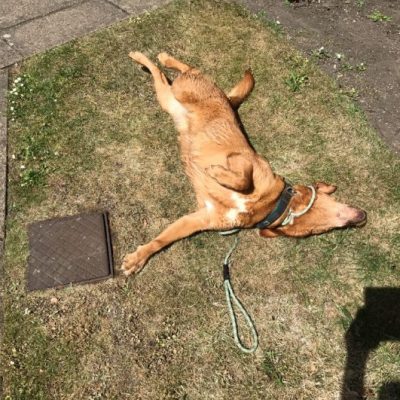 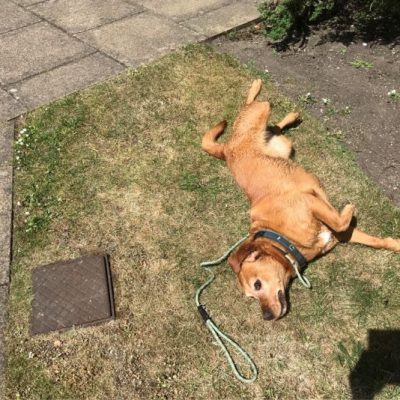 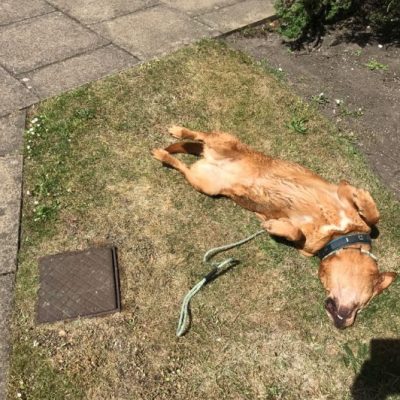 Looking at these photos now – I wonder whether in fact a video would have been better.  She looks more like she is just lying down exhausted!  But she was definitely rolling.

We arrived back in my flat just after 1pm.  I felt totally exhausted – checking my App – we had done 15km – that’s 9 miles!

But such a lovely morning.  I hope to go back tomorrow.

Fi shared some photos this morning, of a bonfire beach party she went to last night with another household.  A stunning sunset.  You can click on the photo to see it in full-size. 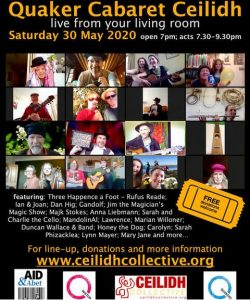 After an hour’s rest of the sofa – this afternoon, I started getting things ready for the Cabaret Ceilidh charity night I was co-running with Robin.  We were having a raffle, but were a bit short of raffle prizes – so started contacting some shops and cafes to see if they would donate a prize – with quite a bit of success – Easter Greens, New Leaf and Mo Beans Coffee Shop all donated raffle prizes.  I also gave a Virtual Magic lesson as a prize.  With so short notice, I also made a couple of vouchers for the raffle draw.

Then did a quick run through the magic I was going to perform.  Then I wrote out the whole of the set order (I don’t own a printer – in times of life outwith lock-down, I just use the printer at my Office Space).

And at 5.30pm we had a dress rehearsal – when Robin and myself logged into Zoom and talked through everything, sorted out backgrounds, etc…

At 6.30pm, all the performers arrived in Zoom.  We each did a sound check, answered any questions, etc..  With over 20 performers this took quite a while.

By the time we had finished, it was 7.15pm – soon to start.  Robin clicked the Facebook Live button and we went live at 7.22pm.

I had multiple jobs: 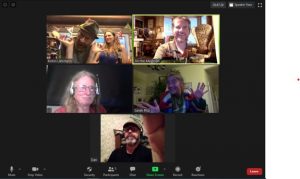 That’s just a few of the things I was doing it.  Whilst Robin was compering and switching the different performers from mute to unmute, etc…

Plus I did a 5 minute magic show.  Which was weird – doing it with no interaction.  Which reminded me why Jim the Magician is on a sabbatical and this was a ‘Guest Appearance’.

My magic show coincided (by chance – or was it magic!) with the NASA SpaceX Launch – which was the first time American’s have headed into space from US territory since the retirement of the space shuttles, 9 years ago.  This was a private spaceship.

We finished the evening with the raffle.

I did a screen capture of the last few people at the end of the night.

A great night – but totally exhausting! 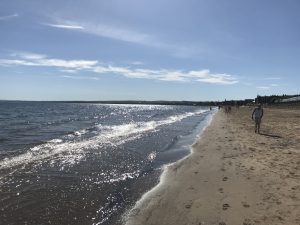 So as I come to the end of this blog – it’s been a very full day.  But so lovely.  Was great to be on the beach this morning and then the Cabaret Ceilidh tonight.  I am going to sleep well tonight!

Now, it is actually Sunday morning.  I wrote the rest of my blog last night, but then WordPress blocked me on my own website.  Thinking I was a potential hacker / SPAM.  Seemed that was a theme of the evening!

I found out that I would have to wait 15-30 minutes to reset itself.  But as it was nearly midnight and still tired from the 15km I had done in the morning, I decided to go to bed.

Here’s to another day of sunshine tomorrow.