It was Monday 23rd March 2020 (Day 0) at 8pm (I think) when Prime Minister, Boris Johnson addressed the nation and announced a UK wide lock-down.

We were all suspected it was coming, but still, for me it sent me into a bit of a panic!  We were losing our freedom to do what we wanted.

We have been waiting for his announcement for a week, on the next steps of easing lock-down, but I don’t really understand what he said?!  Was it that we no longer have to stay at home, but instead can go out – as long as we ‘Stay Alert’?

I’ve just re-watched his announcement and these are some of his words / points:

What struck me about what he said:

(1) He never mentioned the devolved countries.  Scotland, Wales and Northern Ireland are doing things differently.  Scotland is continuing the lock-down for 3 weeks.  But what Boris Johnson said, was just for England.  But he never said this.

(2) How can people go back to work, with 12 hours notice after a bank-holiday weekend?  It just doesn’t give enough time?

(3) On Wednesday, people can drive to other locations – does that mean there will be a massive influx, like in the early days before lock-down of visitors going to tourist destinations or even taking mini-breaks?

(4) The message of going to work if you can, but also work from home – is really confusing.  It’s too vague for the many jobs that people do!

The government has switched its message from ‘Stay at Home, Protect the NHS, Safe Lives’.

To the new message of – ‘Stay Alert, Control the Virus, Safe Lives’.

Fi shared an interesting video with me, which is explaining the Psychology behind the message.  It’s only 5 minutes and really worth watching.  The video explains that the underlying psychology of the message is that the ownership of Covid-19 is on the public.  If there is a second peak, it will because we have not ‘Stayed Alert’.

Explaining the Govt’s bizarre new slogan & the psychology behind it.

It will be interesting to see reactions of people about this over the coming days and see what happens next.  I am sure, for many people, it will be confusing and probably make them really angry.

I must apologise, that this blog is meant to be more about the fun parts of lock-down – but I guess it has also made me pretty angry.  So a bit of a rant, sorry about that. 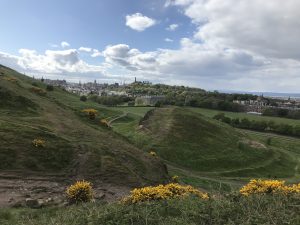 Today, I have had a better day!  After two days of not getting much done, I now have more energy.  I guess, the main thing is because I have been for a run!  Honey the Dog and I have not been for a long walk or run for 2 days (since Thursday).

I only ran 5km today but it has really shifted my mood and I am feeling in more control of my life again.

This evening, I am starting my new plan to be in bed by 11pm.  Which I intend to maintain for the whole of the week!

I was hoping to go for a run this morning, but as I didn’t get to bed again till 2am last night – that didn’t happen.  We had some sound technical difficulties with the Four Directions Movement Meditation as well.  My run this afternoon was just what I needed. 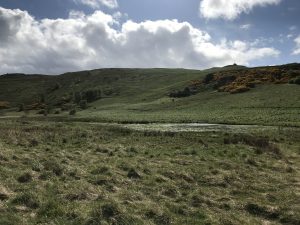 For the last couple of years I have run to Dignity: The Best of Deacon Blue which I bought on iTunes.  Last week when I went for a run, I couldn’t find it in my Library.  Today, I tried to find it again and it still was not there.  I went into iTunes to try and buy it again, but it said I had already purchased it, but did not give me the option to download it or purchase it again.  So instead I ran to The Elephant Sessions, which in fact was very much more invigorating with a good tempo to run to!

Arthur’s Seat was a lot quieter than normal.  It is a lot colder – maybe 6 or 7 degrees centigrade, which is a big change from 16 degrees which we had a couple of days ago.  But there was more traffic about – so I wonder if when it is colder, people drive more?  Who knows.

I wonder whether this should shift to just ‘Announcements’ – so if you want to announce something that is happening, I can include it here?  For example, a virtual charity event you are running or a virtual album launch you are having?

If I get a message from someone with an announcement of their own, I will change it.  In the meantime it’s my announcements!

I don’t know how many of you listened to my blog Days 1-7 last week.  We are now moving onto the next 7 days.

So Days 8-14 will be played on online on Deepness Dementia Radio twice this week.

You can listen to it either via the website – www.deepnessdementiaradio.com

I continue to run daily Chi Gong on Zoom, weekdays (Monday to Friday), both Morning and Night.  So if you are interested in coming along, please do get in touch.

Today we just have two submissions for Readers Corner from Fi and Brian.  They seem to be a bit in competition with each other of who can submit the best Readers Corner post.  Who do you think wins the prize 😉 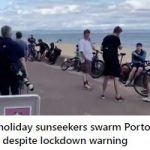 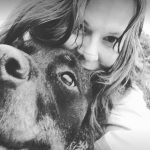 Fi has now told me that ANYTHING she shares with me, I can include in Readers Corner – unless she says I can’t !!

I think she is getting tired of me asking the same question over and over again – “Can I include this in Readers Corner with your FB Profile Photo?” 😉

She shared a couple of things, firstly an article in the Daily Mirror about Portobello Beach being full of sunseekers on Friday – CLICK HERE

She also shared a funny post about a family of four being stopped going on a mini-break from London to Motherwell (see Facebook post below).  For those of you who don’t know Motherwell, it is just outside Glasgow.  Fi writes:

“Also, a lot of my friends are sharing this. They’re not even angry about them flouting lockdown. Just very confused as to why anyone would go on holiday to Motherwell

Cos it’s Motherwell! What would they even do? Sit and watch the neds drink Buckie?

Finally in relation to Boris Johnson’s announcement at 7pm she said:

“Boris is a clown!…listen to Nicola instead! Better yet, share Jacinda Arden’s page…Gives me hope that better leaders do exist!

Does a live from her house every night. So down to earth, sensible and relatable

I watch her press conference every morning”

Earlier today Fi said she was going to the Isle of Sanday to see the puffins.  Photos for these would be great for Readers Corner – but alas she said she got distracted painting! 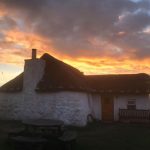 This evening Brian started sending me a series of photos and description, when I asked “Can I include this in Readers Corner” he replied –

“Aye, these are today’s submissions!“

“Went somewhere new for my walk today – through a “hidden park” in Granton, past its famous abandoned gasholder – did you know it’s been there for more than 100 years? It might become a new waterfront hotel or concert venue one day!

It was the first time I’d ever seen the Granton statue up close, which is in the middle of some of the new housing near Edinburgh College. The work is called “Going to the Beach” and you can follow a walkway all the way to the water!

The modern architecture in the area is actually some of the most interesting in Edinburgh, although there are not really any shops, apart from an enormous Morrison’s supermarket!

Forthquarter Park, which goes past the gas tower is probably the newest park in Edinburgh!”

Here’s his photos for ‘today’s submission’! 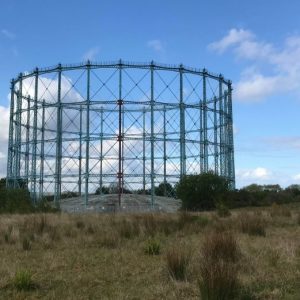 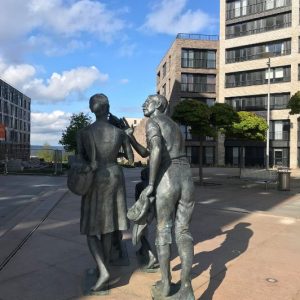 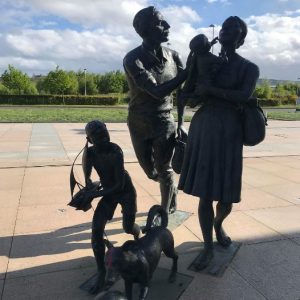 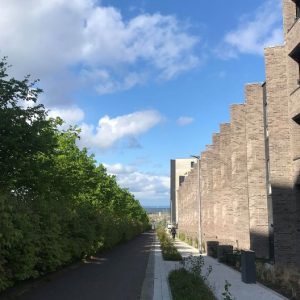 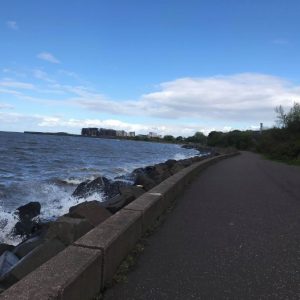 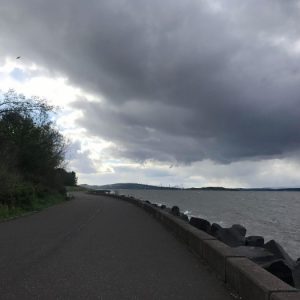 Thanks to both Fi and Brian for their sharing.

It’s certainly a close-call on who is best in today’s Readers Corner.  If Fi had shared photos of Puffins, that would certainly have won the prize for Today’s Best Readers Corner Post!

As I come to the end of today’s blog, there main big news is about Boris Johnson announcement on the road map to ease lock-down.  Which for me was disappointing, especially with such a build up over a good few days.  The government originally were going to announce something on Thursday, but this was put on hold until this evening.

Perhaps you don’t feel the same?

Now on our forty-eighth day of lock-down, I am sure that things will continue as it has been for some months to come.  But it does beg the question of when will lock-down be over and I stop writing this blog?!

Hope you’ve all had a great weekend.