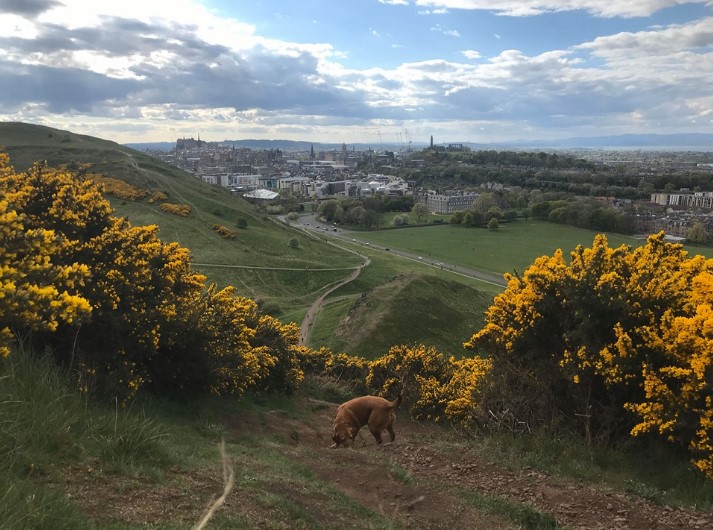 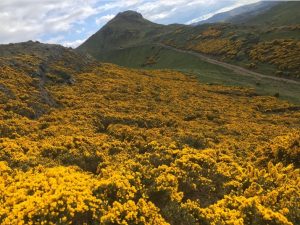 On my walk this afternoon, I was thinking about the significance that we are not 40 days on lock-down.  Although I am not a christian, I am aware that Jesus spent 40 day and 40 nights in the desert.  I looked up online to find out more about this, but didn’t get very far.  I then looked up whether there was any comparisons to this in relation to lock-down and found some interesting stuff.

In this article about Italy (CLICK HERE) it states the word ‘quarantine’ originates from the Italian word ‘quarantena’ which means 40 days. Or ‘quarantino’ which means 40.  The literal translation of quarantine is “40 days in isolation”.  The article suggests that Italy extended their lock-down so that it ended after 40 days.

The article goes onto to explain that the first instance of quarantine in Italy, can be traced back to almost 700 years ago, as the black death spread through Europe in the 14th Century.  In 1348, soon after the plague arrived in cities like Venice and Milan, city officials made it mandatory for all incoming ships and trade caravans to be quarantined for forty days in order to screen infection.

I found another article (published on 31st January 2020) (CLICK HERE).  It describes how quarantine has been used to prevent the spread of disease.  It is unclear, where exactly the 40 days concept came from.  There has been some suggestion to the biblical reference, the idea of spending 40 days and 40 nights in the wilderness as Jesus is said to have done. 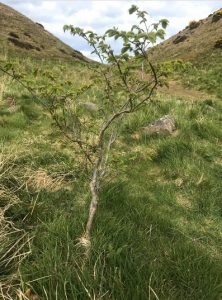 In the UK, one of the most famous examples is the English village Eyam’s self imposed quarantine during the bubonic plague.  Between September and December 1665, 42 residents of the Derbyshire village died.

In June 1666, the newly appointed rector decided the village should be quarantined.  No one was allowed to go out or come in.  They were sent food and supplies.  The peak of deaths came in August 1666 with 5-6 deaths a day – but hardly anyone broke the cordon.  By November 1666, the disease was gone.  The lock-down had worked.

In 1900 in San Francisco, Chinese immigrants were quarantined after a Chinese man died in a hotel due to the plague.  Part of Chinatown was blocked off and residents could not leave or return.

During World War One, 30,000 sex workers were quarantined amid fears about the number of rising sexually transmitted diseases.  They were allowed to leave after it was confirmed they no longer had STDs. 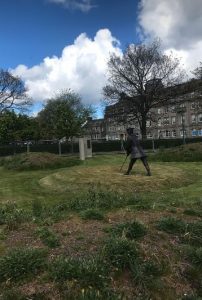 This morning, despite Saturday being my day of rest.  I was awake by 10am and didn’t feel totally exhausted, like I usually do on a Saturday (in lock-down).  So decided to go and explore another area of Edinburgh.

Now that I know that I am a Leither (!), I decided to go on a cycle to the heart of Leith.  During that I chained my bike up and went for a walk round Leith Links.  It was super sunny.  So explored lots of new lock-down areas.

I found a statue I haven’t seen before of John Rattray, who won the world’s first ever golf tournament that took place on Leith Links in 1744. 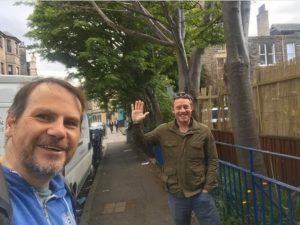 I stumbled across a few people I know.

Firstly, I bumped into Lewis who runs ‘Its All Good‘ cafe on Easter Road.  The Cafe has been shut for the whole of lock-down.  So was good to see Lewis.  He has recently become a father and with his wife soon to return back to work after maternity leave.  So Lewis is going to be looking after his son full-time, which he said he was looking forward to.

Lewis and I did a social distancing selfie!

I then came across Leith’s Crops in Pots.  Which I have heard of, from people telling me about it, working there, etc.. but have never been.  It grew up from a concrete barren piece of land, in which the founder, Evie, wanted her children to have a place to connect to nature whilst living in the densely populated Leith.

It is a community croft, which has a whole host of different projects across Leith and has a cafe (which is currently shut due to lock-down).

But during lock-down fixes bicycles for Key Workers and provides daily meals to anyone who can’t get out to get food.  These are all delivered by bicycle.  After talking to the guy (Tom) for a while, I realised we knew each other from Ceilidh Collective.  He knew me as Jim the Magician. 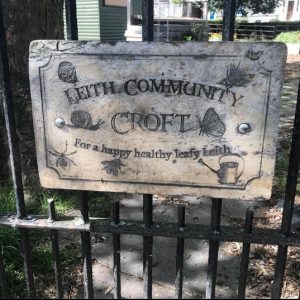 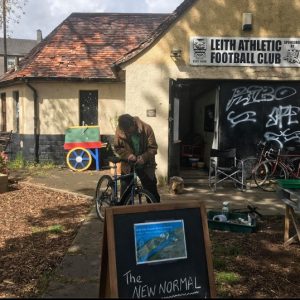 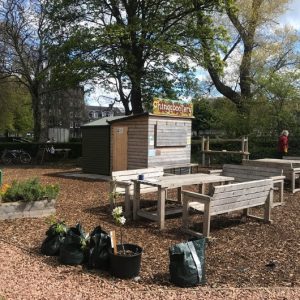 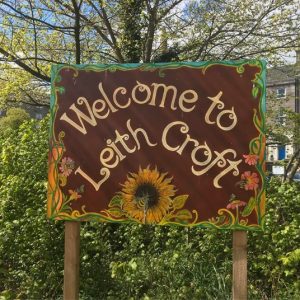 The area I explored seemed a lot quieter than Easter Road where I live.  But realised, that it is a lot larger area, with lots of more pedestrian areas.  Plus, parts of it is closed for tram works, which is currently stopped, so some streets are blocked off.

Was great to be out and about in a different area of Edinburgh, so close to home, but so more magical.

Helen (from Sweden) shared a lovely post this morning.  Which although could go in ‘Readers Corner’, I want to include it in the main part of the blog, as it is so lovely.

Check it out, it’s by Tom Foolery, about lock-down and called ‘The Great Realisation’.  Thanks Helen. 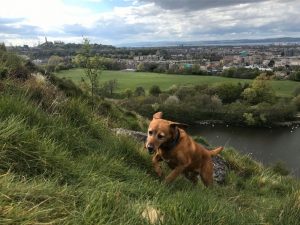 I hadn’t gone out with Honey the Dog on my adventure round Leith.  So by the time I got home at 2pm, she was keen to go outside for a walk.

I was tired after my morning adventures, so tried to stall her.  But by 4pm, she was not going to give up for a quiet Saturday afternoon.  So we went out for a walk on Arthur’s Seat.  The sun was shining and it was lovely and warm.

Arthur’s Seat seemed quieter today.  In the last few days, all car parks have been closed, to reduce people coming to the park and keep us all in lock-down.  There is one car park still open for ‘Key Workers’.

I found another route, we hadn’t done before.  Climbing up a lot of steepness to start with through all the gorse.  The yellow was so bright and lovely.  With all the climbing, I stopped a number of times and sat to enjoy the silence, while Honey went off to explore.

During our walk, I stumbled across some stones and writing on pieces of wood.

It’s amazing when you are walking slower, you notice so many new things! 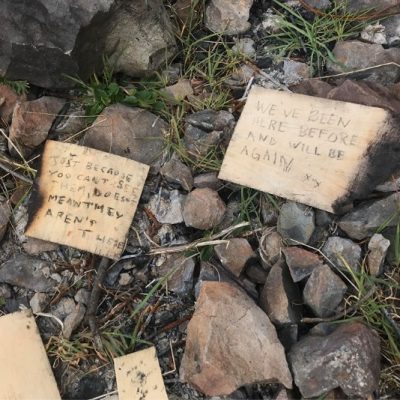 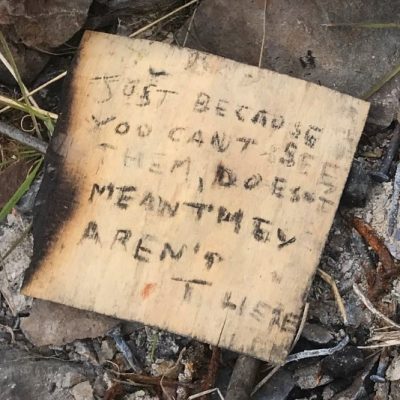 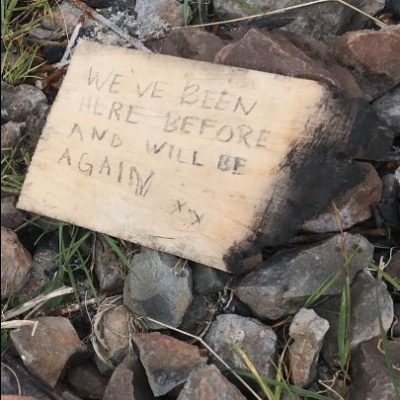 Tomorrow, Sunday, I am running a Zoom movement meditation called ‘Four Directions’.  I love this meditation.  I know that it is late notice to be telling you about it – so if I am doing it alone, I am happy with that.  I hope to be doing it every Sunday.

With fear of Zoom Bombing, I will not be providing the Zoom details here.  But if you are interested in coming along, please email me (jim@beyondbeliefmagic.co.uk) or contact me on Facebook and I will send you the Zoom login details.

Here’s a few details below: 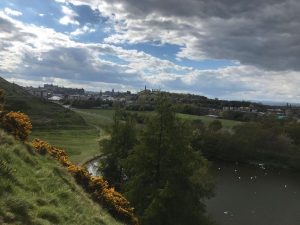 Come and join me tomorrow for a 1 hour movement meditation.

PLEASE NOTE – Once this starts, I cannot let others enter the room, so the room will be locked at 12.30pm.

WHAT DO YOU NEED

(1) This is done to music. So you need to hear the music from your computer / tablet. Once we start everyone will be on mute.

(2) You need to have enough space to move your arms and legs stretched out in all directions. Ideally, start the meditation facing North (but not essential).

(3) At the end you will be lying down, so maybe a blanket if you think you may get cold.

MEDITATION DETAILS
This is a Sufi Meditation, which the Sufi Whirling Dervishes did (12th Century) to centre themselves before they started whirling. It is a great meditation to centre yourself.

It is a 50 minute meditation in two stages.

– Second Stage – 15 minutes
SILENCE – lie down on your belly or back with your eyes closed.

Just one share for Readers Corner today.  Partly, also as I put Helen’s in the main blog. 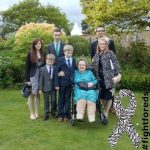 “Loving the pictures, it looks so scenic and peaceful where you live!
I watched a stream of Nelly a few weeks ago. I loved how Norman was winding her up and she was telling him to go away. The girl has sass!”

Yes, Arthur’s Seat is such an amazing place to go in Edinburgh.  An extinct volcano right in the middle of the city.  It’s just over 1km from where I live!  Within 25 minutes walk you can be up in the ‘hills’ looking over the city! 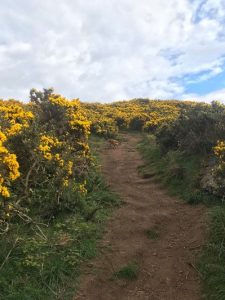 As I come to the end of today’s blog.  Like I said yesterday, this new way of being is now normal.  I no longer see myself “in lock-down”, this is just the way life is.

I was thinking today, how much more relaxed my life is.  With no social gatherings, not meeting people, no travelling to work and limited time outside, I just have less going on in my life.  So more time to relax.  I do hope, that I can keep this new lifestyle going in the years to come.

Its been interesting to research about quarantines of the past and “40 days”.  I hope you also found this interesting.

I wonder what the next 10 days have in store for us – the big FIVE ZERO !!

Wish you all a relaxing and fun Sunday.