Today in the anniversary of my Dad’s death, 16 years ago.  I can still remember that time very vividly.  Last year was super special as the 15th Anniversary, so I was hoping to mark it in a similar way, but it hasn’t really happened.

Although a few significant things to share.  My sister, came along to Qi Gong, just on the spur of the moment thought as she had some spare time and wanted to come along.  She had forgotten it was our Dad’s anniversary of dying, so maybe it was his spirit encouraging her to come along?

Also my mum was telling me this evening, that her daily email exchange with her friend Sue, had a weird addition.  It said the email was sent to ‘John Campbell’ (which was my Dad’s name) – which obviously if it was sent to him would have not arrived in my mum’s email inbox.  Was it Dad’s spirit sending us a message?

I read a book years ago called ‘Signals‘ by Joel Rothschild which talks about the many signals he received after his partner died, which beyond doubt was not just a coincidence, but his partner’s spirit.

I don’t think I received any ‘signals; from Dad today, although my netbook did stop working and despite Graeme (at Edinburgh Computer Repairs), putting in a new hard drive it still didn’t work.  Plus my mobile phone charging cord broke and although my Dad was really into computers, it didn’t feel like a significant ‘signal’ from him!

So, instead I am going to share what I posted a year ago on my Facebook Page –

I can’t seem to embed the Facebook page into this blog, so here it is copy and pasted below –

“Today is the anniversary of my Dad’s death 15 years ago. It’s been a day of noticing and reflecting – and a lovely walk this evening on Arthur’s Seat!!
Reflecting on the changes in my life and the world.
In 2005 I was an academic at the University of Teesside (Middlesbrough), with few friends, working 60 hours a week, driven by my career!
I now have a lot more of a relaxed life, working as a full-time Magician, living in Edinburgh, have some awesome friends and an amazing dog!!!
In 2005 there were no smart phones, tablets, Apps, emojis, Netflix, Instagram, instant photos/videos, Netflix, Amazon, Facebook (? Think it was MySpace & Bebo)…to name a few…
In 15 years time I hope to be living by the sea, with a dog and probably have another job / career… 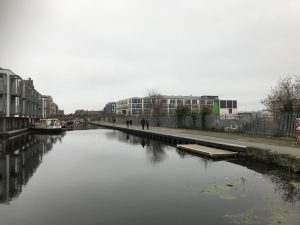 Today has been another day of coldness and greyness.

I was chatting to Fiona (my neighbour) about how cold it was and realised that a month ago, it would not have bothered me/us, but because we’ve had some lovely warm weather we’ve got lulled into a sense of Spring is on it’s way!

I’ve spent most of the winter wearing thermals, but put them away at the weekend, thinking that would be them in my cupboard for another year.

I haven’t dug them out, yet, this week – trying to convince myself it isn’t that cold! 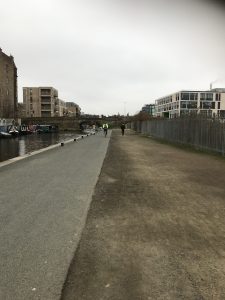 It’s been another day of work.

Honey was getting restless from about 2pm, jumping up at the front door every time we heard someone going through the gate.  I always let her out to see who it is and it gives her a bit of exercise.

So at about 3.45pm, we finally headed out for a walk – through The Meadows and along to Graeme’s to get my netbook fixed.  I’ve been promising Honey a longer walk all week, but when it comes to walking her I can’t be bothered!  I am determined to take her for a longer walk tomorrow!!!

I found myself admiring the beauty of this tree on our walk !!! 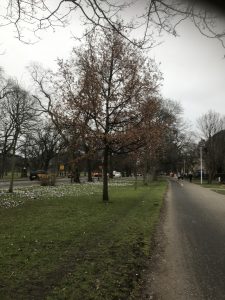 When I got home, I made the fatal mistake of sitting down on the sofa with a hot chocolate to watch the Six O’clock news to find out what was going on in the budget that was announced today.  The fire has been on most of the day and the heat drifted me off to sleep!!  I slept for about 20 minutes.

The fatal mistake was that I am now more awake and have missed my blog curfew !

When I woke up, I noticed my mobile phone charger (the cord) was sitting on top of my wood burner, how did it get there?  Sadly, it had melted and wouldn’t work.  But after a quick WhatsApp Message to my neighbours, Tim came to the rescue.  Not long later Fiona replied, saying she had one and then Helen said she had an assortment of charges (for future reference).  So lovely to have wonderful neighbours 🙂

Have you been watching the new Gordon Ramsay game show on BBC One?  It’s called Bank Balance.  It’s on at 9pm on Wednesday, Thursday and Friday nights.  I watched last week and had forgotten it was on today, but then saw the trailer just before the Six O’clock news and falling asleep!  So I didn’t start the blog until 10pm!

I found this article yesterday in The Guardian about living in a quarantine hotel for 10 days, it’s called ‘I’ve been washing clothes in my sink’: the reality of UK hotel quarantine.

It’s about a guy called Chris who was returning from a ‘Red List’ country for work.

Chris reports that most meals are served in a box, with some kind of leaves.  There are no plates provided, not bad food, just not what he would eat.  Yesterday was salmon and kale.

He has spent 10 days in a room, not much bigger than the bed, but a massive window stretching from the floor to the ceiling, so he could get lots of fresh air.

On booking the hotel, he got confirmation he had paid, but no indication of what hotel he was in, which resulted in a long expensive phone call to find out where he would be staying so he could complete the passenger locator form before boarding the plane.

When he arrived at the hotel, he was given a choice of meals – meat or veggie.  But could also order food from the hotel menu and/or order food in from anywhere to be delivered.

He was given free washing for “seven essential items” over the 10 days, leaving him confused if jeans were classed as ‘essential items’ or just underpants and socks.  He could pay for additional washing.

But because he has been away from home for 45 days he had his own detergent, so has been washing his clothes in the sink.  He had an Xbox which he had brought with him and lots of ‘care packages’ from friends including books, scone/jam/cream, a Rubik’s cube and a case of beer.

He also did two days of paid work, which kept him occupied.

He heard noise from outside his room, indicating people were not ‘behaving themselves’, even going into each others room to have a chat!!!

He doesn’t have a problem with hotel quarantine, in fact thinks the UK should have started it 12 months ago.

This is a little harder than I had anticipated, I’ve written so much in all these blogs.

But one blog, that I always remember was near the start of lockdown when I experienced fresh air for the first time for a few days, after being stuck in doors.  It seems that in this current ‘Stay at Home’ lockdown I am not staying indoors as much.

This is what I wrote about the fresh air –

“Despite trying to ignore Honey the Dog, by 7.30am I concluded the quickest way to get back to sleep, was to take her out, give her breakfast and then go back to bed.  So half asleep, I threw on some clothes and went outside.

Wow! Suddenly I was stopped in my tracks!!  The fresh air!  The fresh morning air!  It was just perfect.

I had forgotten how that felt after so long in my flat, stuck in my head.  It was a lovely morning and completely silent.  I just stood there and enjoyed the beauty of it all.  The silence, the presence, the stillness, the awareness.

I didn’t want to move, enjoying the moment – I wanted to stand there all day.  But alas, Honey the Dog had other ideas!

How amazing, just in a few days, being outside was such an awesome experience!!  I hope I treasure this, once lock-down is over.

And so we went round the corner to the graveyard that my flat looks over (photo at the top of this blog).  The sun was shining, and starting to rise – the sky was blue.  Its impossible to describe how lovely it was, I just don’t have the words….It was simply perfect.”.

Do you have a memorable blog that you want me to share in here?  Send me details and I will include in tomorrow!

“Thanks for sharing your day 7 reflections on Time. I enjoyed reading it again. I had to click back to day 7 to see if you really did write that back then. I remembered the bit about dancing with the lady in the window, but the rest seemed so unfamiliar.

I know you’re probably all blogged out now, and I know the blog will probably soon come to an end but I’m so glad that you recorded this weird time we’ve all been through. Reading what you wrote about Time on day 7 gave me that feeling of unfamiliarity and uncertainty again, that we all felt at the beginning of all this. Whereas, more recently, reading your blog feels normal and familiar, much like my feelings towards the restrictions have also evolved over time.

People might be hitting a corona wall and getting fed up with restrictions and lockdowns, but I’ll always enjoy reading your daily reflections … for as long as you continue the blog.”

Awwww – thanks Helen, that’s really touching.  Glad you are enjoying the blog (for as long as it goes on for) !! 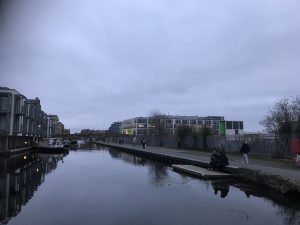 As I come to the end of this blog, I have missed my blog curfew by a long shot!  But impressed that it is only 11.30pm, managing to knock a quick blog together in less than 2 hours, although I was starting to pull things together during Gordon Ramsay’s’ Bank Balance!

I don’t know what the weather was like this time last year, but going on the Facebook photos it looks cold, but a lovely day.

My dad died on a similar blue sky crisp afternoon, like it was last year.  He spent the morning doing The Times crossword, which he completed, had lunch with my mum, sister and his grandson.  Then went outside to fix a fence, put the tools away in the shed and then had a heart attack and died.  Although, he was a young age, I think if I could choose the last day on this planet, I would like one like his 🙂

In recent years, when I see photos of myself, I see my Dad more and more in photos of me.  I feel touched to look more and more like my Dad.  I feel that I live a lot through his dreams – in his younger adult years he was a magician, always wanted to be self employed and live on a boat.  I feel honoured to have been his son and hope that he’s proud of me living out some of his dreams