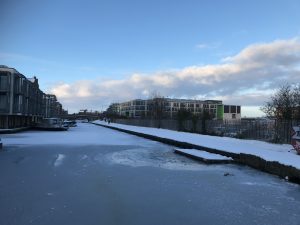 Today everyone seemed to be out and about – so many cars and so many people. It feels like the first day in a long time, of the ‘normal’ traffic and busyness in the city.

It didn’t feel like we were in lockdown and the legal message is to ‘Stay at Home’!

When I cycled this morning onto Tollcross, I was stunned by the amount of cars everywhere.

As I cycled near the Omni Centre, there was a traffic jam with so many cars.

Leith Walk was full of pedestrians and the queue at the Coffee Hut in The Meadows was the biggest I’ve seen it.

The canal towpath was just as busy as usual – it’s always busy, unless it’s early in the morning or late at night!

But, despite, not getting up until 8am, our morning walk along the canal was pretty quiet – I love being out on the canal in the morning, so peaceful 🙂

Then I headed along to my flat on my bicycle, to do a few bits and pieces.

Then back home, via Graeme’s Computer Shop to collect the new snow shovel.  Getting deliveries to the canal is a challenge, as there is a locked gate, but Graeme said I can get things delivered to him.  The snow shovel had no name on it, just an address and he was mystified why it had arrived at his shop as he nor Brian had ordered one!

You will remember I broke the other one on Wednesday (Day 324).  I was surprised how easy it was to cycle whilst holding onto it (even though over 4 foot long) – but didn’t get a picture!  It’s pretty challenging cycling at the moment in the snow, let alone holding a long snow shove and trying to take a photo!!

When I got back to the canal, our wood had arrived.

The usual Wood/Coal Man has run out of wood – everyone who would normally be only using their fires in the evening and weekends are now working from home all the time, so supplies have been exhausted!  Helen (my neighbour) and I found another supplier, that had a special offer for 20 bags of logs (10 hard wood, 10 soft wood) and 2 bags of kindling!

Helen was moving the wood in the wheelbarrow, but once I had chained my bicycle up and let Honey the Dog out the boat, I took over, which was only one more trip! 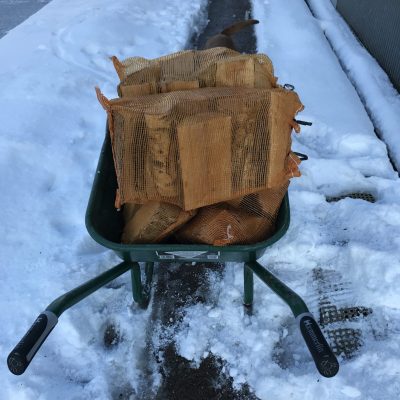 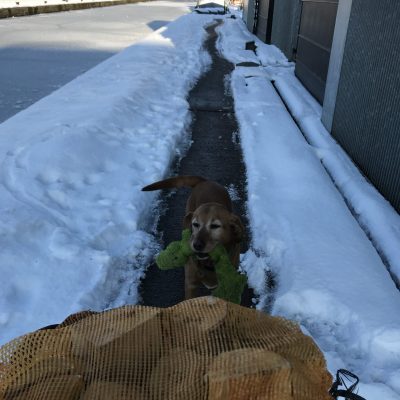 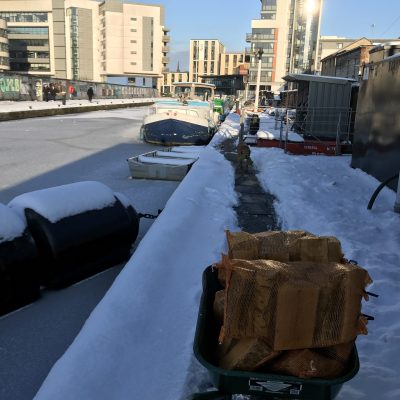 Then there was the challenge of how to get all the wood onto the boat. 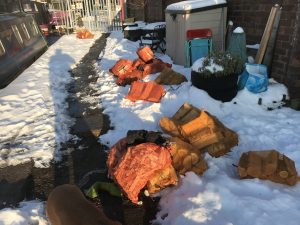 I managed to get 10 bags onto the bow, plus the 2 bags of kindling, which is where I normally store it, but still had 10 more bags to find a home for.

Incidentally, I now have about 7 bags of kindling – so if any of you want some kindling for your fire and live in Edinburgh, I would be happy to give you some!!! 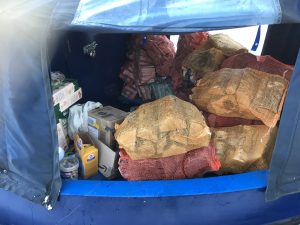 Lifting wood onto the bow is always a challenge, as there is a gap from Discovery to the towpath, plus now the added snow (I didn’t think to use the new snow shovel to clear the towpath!) – I lost of footing at one point and nearly fell in, but managed to stop myself just in time 🙂

Then I noticed lots of people taking photos near Discovery from the other side.  In fact, I had spotted this happening this morning too. 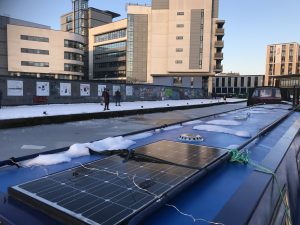 It was due to a strange phenomena of large chunks of ice sitting on top of the frozen canal next to Discovery. 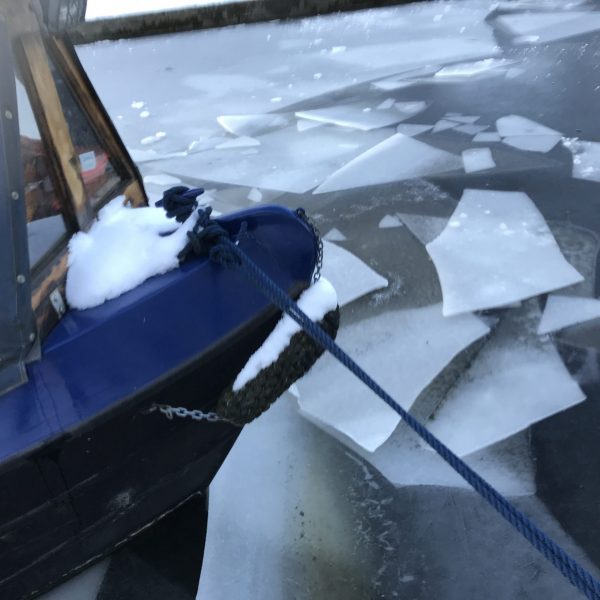 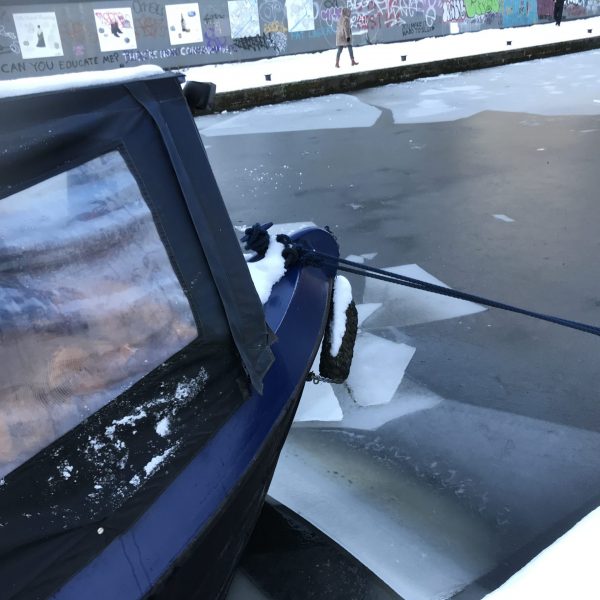 I asked Fiona what had caused it and she said that yesterday, someone had started the engine of the boat next to mine and it was in reverse, churning the ice/water up.

I later took photos from the other side of the canal (blog cover photo – Honey is getting good at posing for photos!). 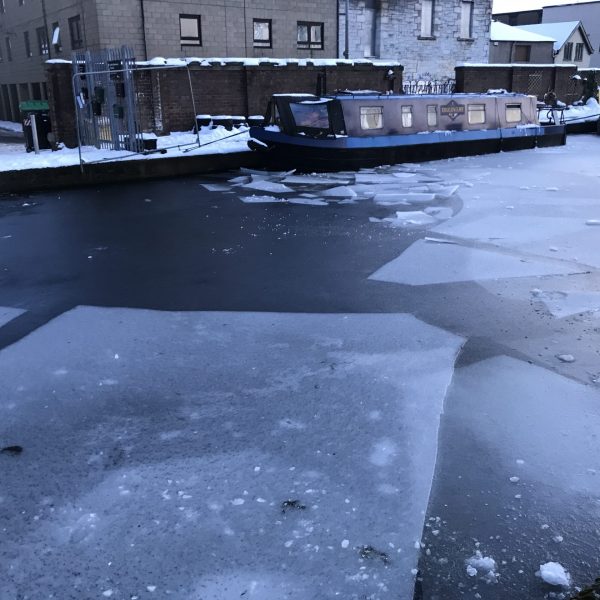 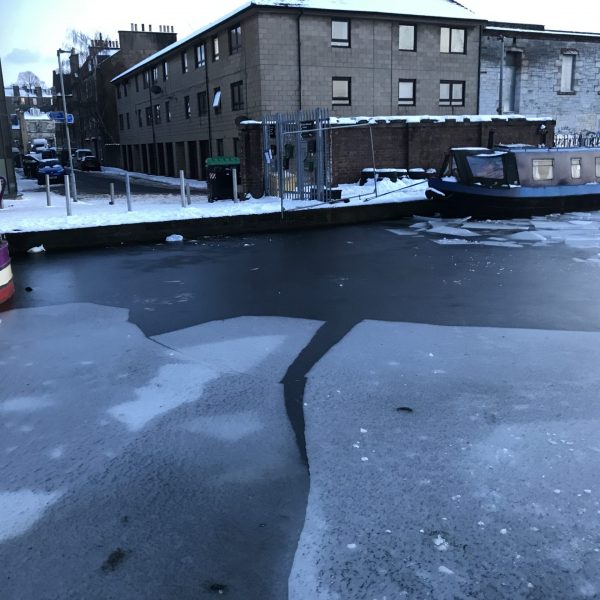 Sorry, got distracted, back to the wood story!  I managed to squeeze 3 bags into the shed, leaving me with 7! 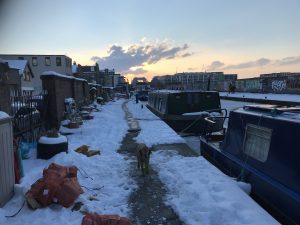 I concluded they would have to just live near the wood burner on Discovery.  So carried them all in, realising that they actually took up too much room onboard!

The sun was starting to go down, so I took Honey for a walk up to Harrison Park (Bridge No. 3). 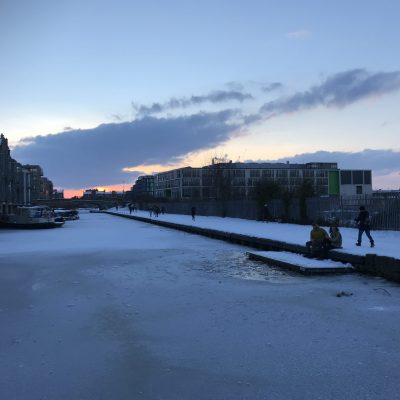 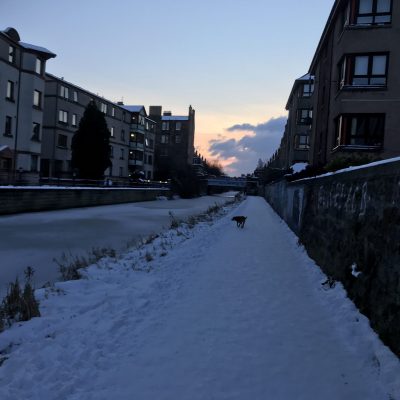 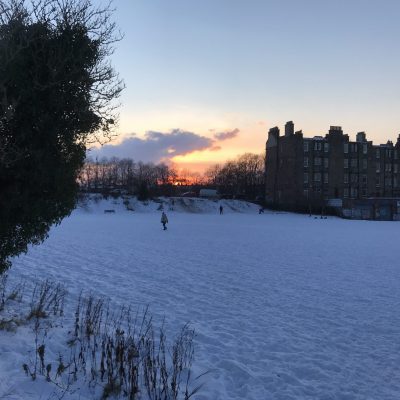 I spotted a wee slope with lots of people still sledging 🙂 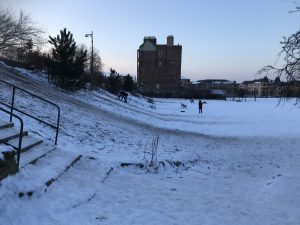 Then headed back to Discovery. 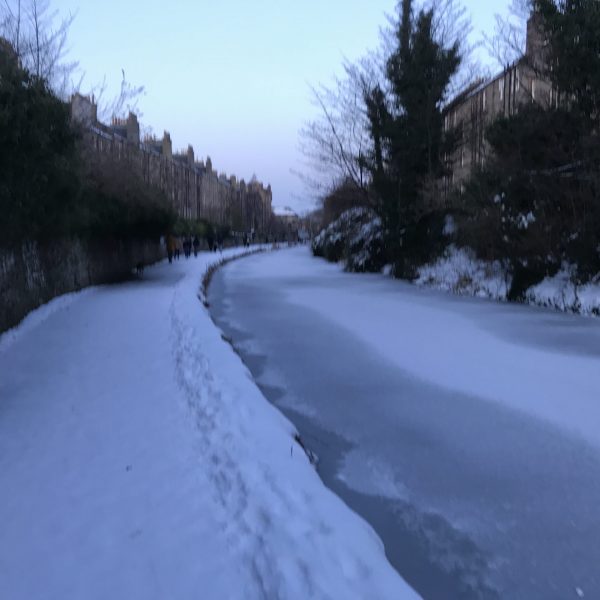 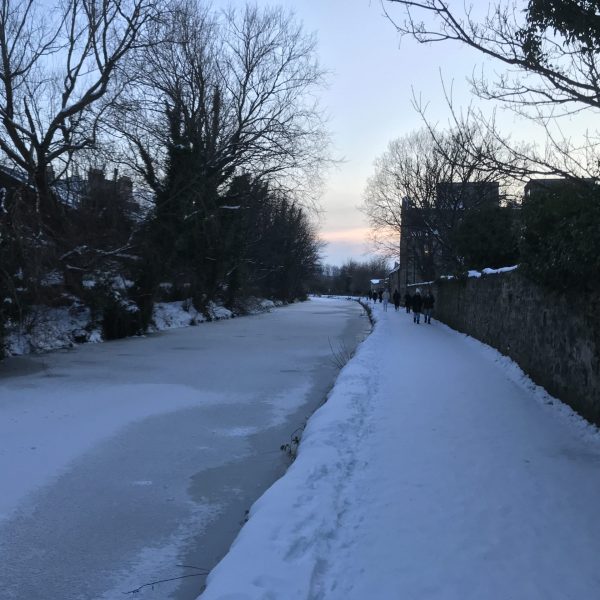 I decided, that I would have to try and get some of the wood into the bow, from the bow door onboard Discovery, which was a success 🙂 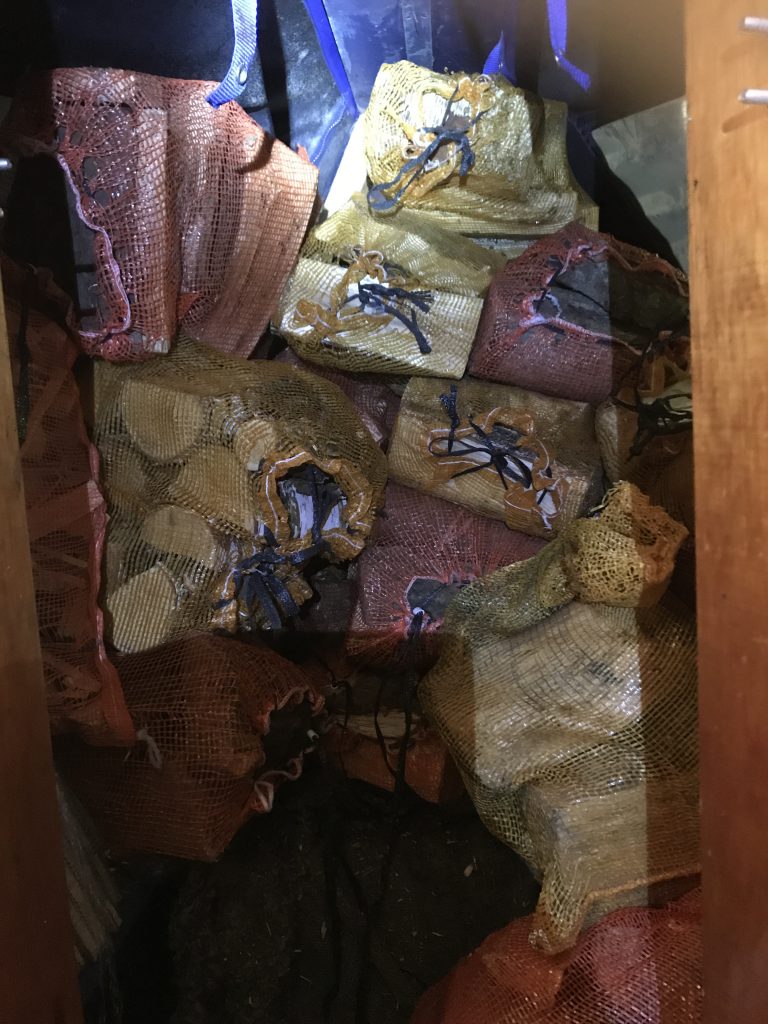 Lets hope they don’t topple over into the canal 😉

Anna send this to me today, which made me smile 🙂 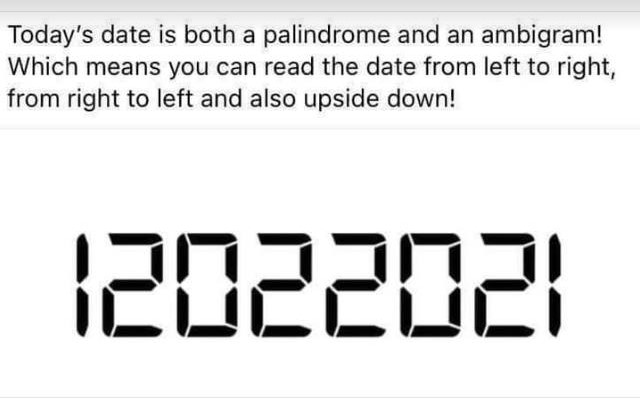 There is another palindrome and ambigram next year – can you work out what day that will be? 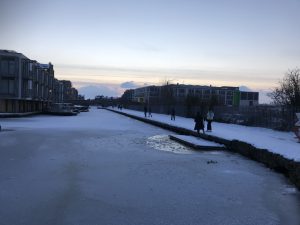 As I come to the end of this blog, it is getting close to 1am, but I had a 3 minute microsleep earlier, so am feeling wide awake!

This evening, there has been the regular sound of banging travelling down the canal as people try to break the ice.  You wouldn’t believe how loud it is, In fact, earlier it was so loud Discovery shook.  I opened my front door to see who was nearby, just as Fiona was coming out to investigate too!  There was no one nearby who was trying to break the ice.  The raised up ice next to Discovery, seems to be attracting more attention, so maybe folk are trying to crack the ice near Discovery?!

It’s been another super cold day today – I had cold feet for most of the day.  Wondering why I haven’t had cold feet for the last two days, I realised that I wasn’t wearing my walking boots and my feet/socks were wet.  But they soon warmed up from the wood burner 🙂

No rain today, just another really clear sky and sunshine.  Tomorrow, seems to be a similar type of day with a maximum of -1, dropping down to -6, through the night.  But, Sunday the temperature jumps to 6 degrees, it’s going to be a weird being so hot!!!

Hope you’ve had a Fun Friday !!

“Jim was fantastic at our office event. We were all blown away with his tricks! I cannot recommend Jim enough. He is very talented and really knows how to wow the crowd. Brilliant night had by all!”