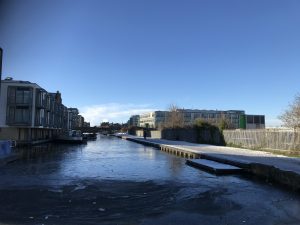 Today’s blog is going to be mainly photos, as I am super tired.

It was the Big Burns Night In, fundraising Burns Night today, on Zoom, which was super fun being one of the ‘tech’ people, but also very tiring!

My day has pretty much been all to do with this.

Not only did the Burns Night have a whole host of things going on in the main room – ‘The Stage’ – there was also many Breakout Rooms (we called them ‘Lounge Rooms’) with poetry, music, quiz, games, a ceilidh and many rooms for people just to chat.

Some folk, needed help going to the different rooms and others to get out, for ever watching the chat and helping people.

But the day starting off with a walk with Honey the Dog, round Bruntsfield Links and The Meadows. lots of folk were out.  We came across a kind of labyrinth, which had been made in the snow (blog cover photo) which Honey and I walked round. 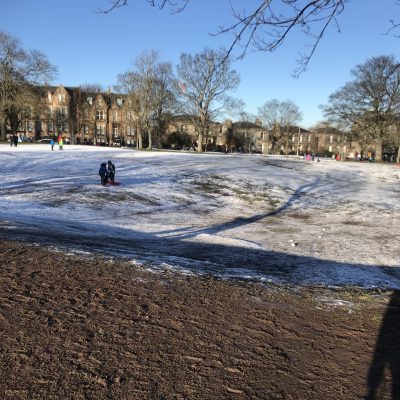 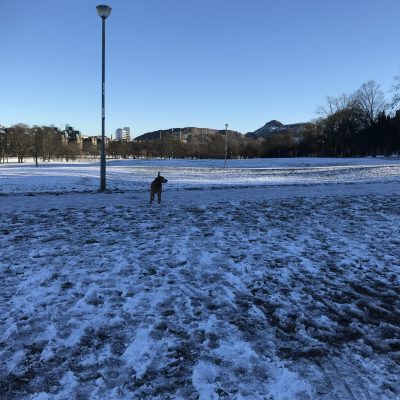 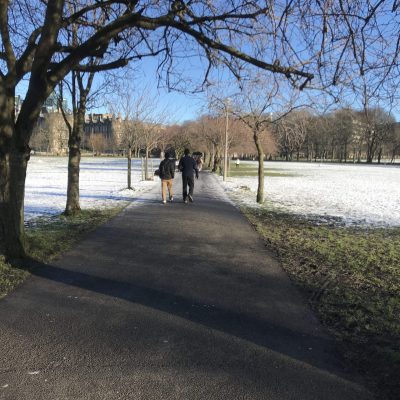 In Bruntsfield Links, there was a nursery slope for sledging, which was full of young children and families – perhaps having their first experience of sledging 🙂 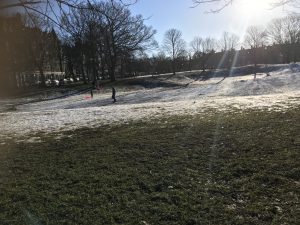 On the way back to Discovery, I saw a shop with limited access due to Covid / Lockdown: 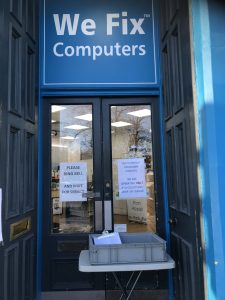 Then I dropped Honey off at the boat, lit the fire and jumped on my bicycle to cycle to Robins.

Everyone who had signed up for the Big Burns Night In, was sent a wee box in the post, with chocolate, programme, recipes, a willow star and a tealight.  As the letter box at the canal doesn’t take parcels and if my flat has post in it, parcels don’t fit, I was worried I would not get my box in time.  So I said I would pick mine up from Robins.  I could have gone earlier in the week, but I wanted a print out for the tech/organisers (I don’t own a printer) – which has been updated through the week, with the final version finished at 10am this morning, hence why I had to go there this morning.

Robin lives in Eastfield, which is between Portobello and Musselburgh. The cycle is nearly all off road 🙂

Heading through The Meadows and onto The Innocent Railway (see Day 145 and Day 128), then onto various paths that comes out at Brunstane. 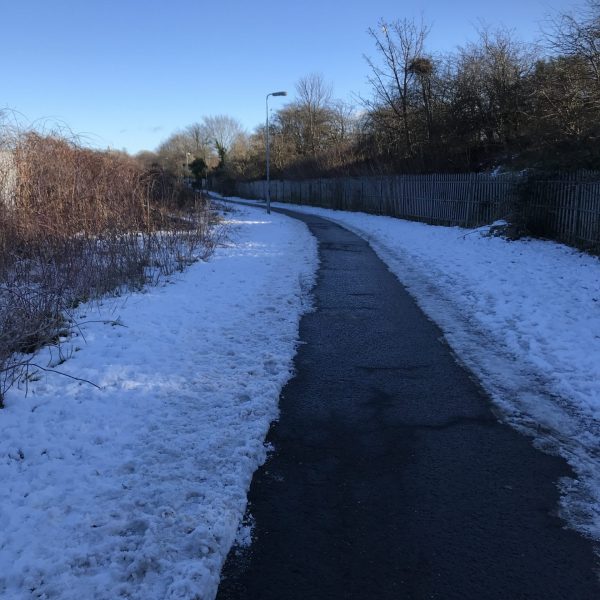 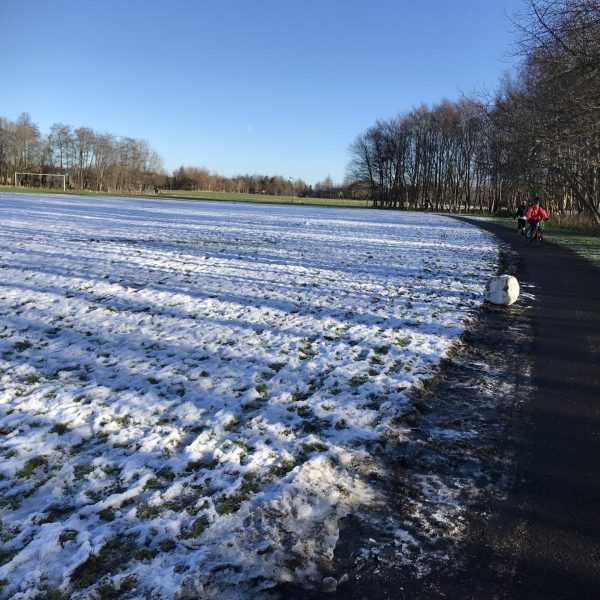 Arriving a Robin’s we chatted for a while in his Garden, whilst I drank a mug of tea.

Then back on my bicycle to head back. 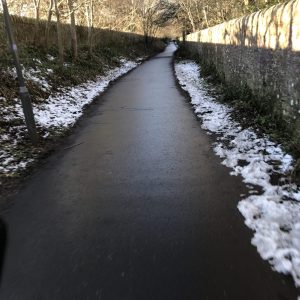 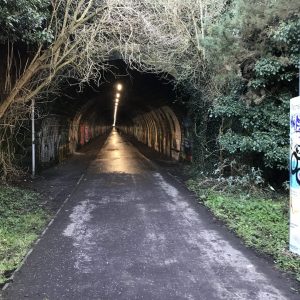 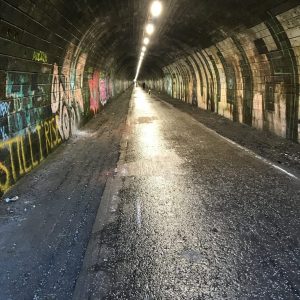 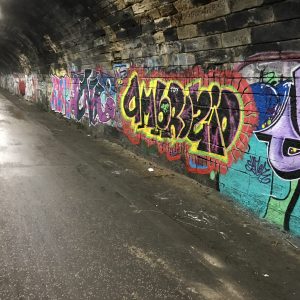 I walked through the Innocent Railway Tunnel as it’s a gradual uphill, which was actually great, because it gave me some time to admire all the amazing graffiti art on the walls.  Wondering, whether folk create the art in the moment or have a picture they copy?!

Although, it wasn’t raining outside, I guess, the melting snow/ice was dripping water through different parts of the roof.  People had positioned things right under the drips – cans, tupperware, empty pot , creating an amazing series of beats echoing through the tunnel – it was awesome!

Then I remembered, reading that my friend Rachel had made homemade marmalade and anyone who wanted some, could let her know and she would leave some outside her front door.  I was passing by her house, so gave her a phone and she handed the jar of marmalade at her front door.

I then had to go to a lady called Alison’s house.  She had designed a lot of the material in the Big Burns Night In box, but it hadn’t arrived in the post, so Robin had asked me to drop one off at her house.

Her house was close to Arthur’s Seat, it was a lovely view and a great house on the corner of the street. 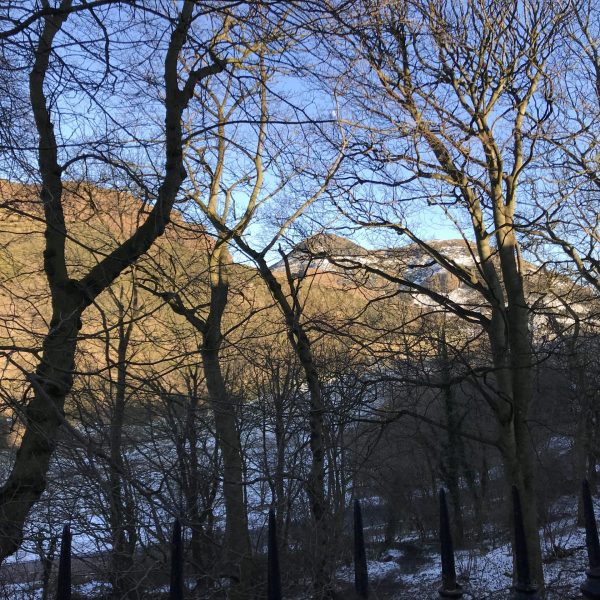 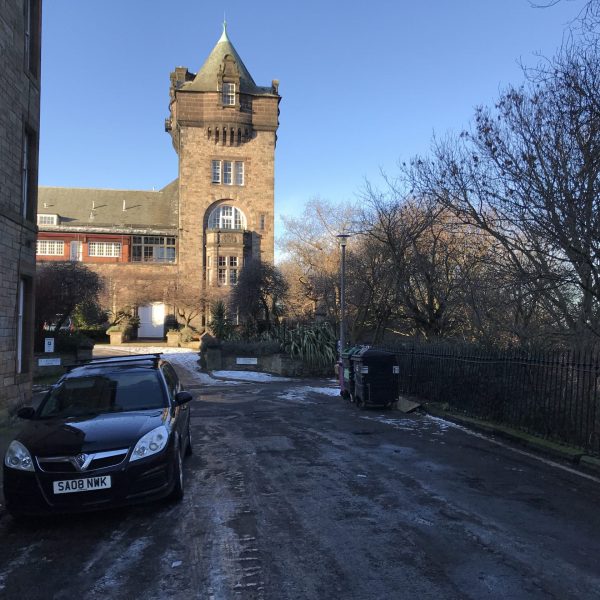 I had also agreed to drop off Gandolf’s box to him, so I phoned him and headed off to where he was, which involved heading along the road next to Arthur’s Seat.  It was a stunning day and with the roads shut to traffic (since June 2020 this has happened every Saturday and Sunday) it was great to be free of traffic with just lots of walkers. 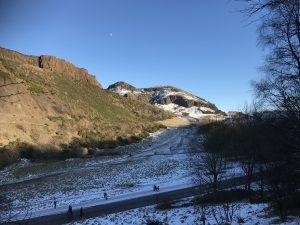 Handing Gandolf his box and then heading back to the canal. 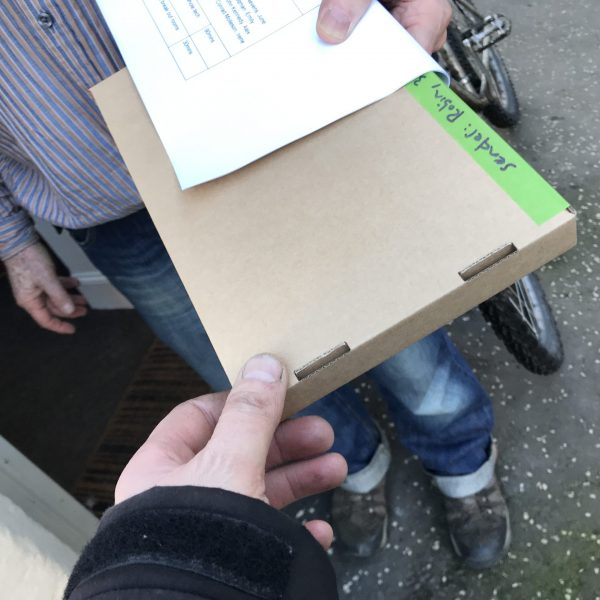 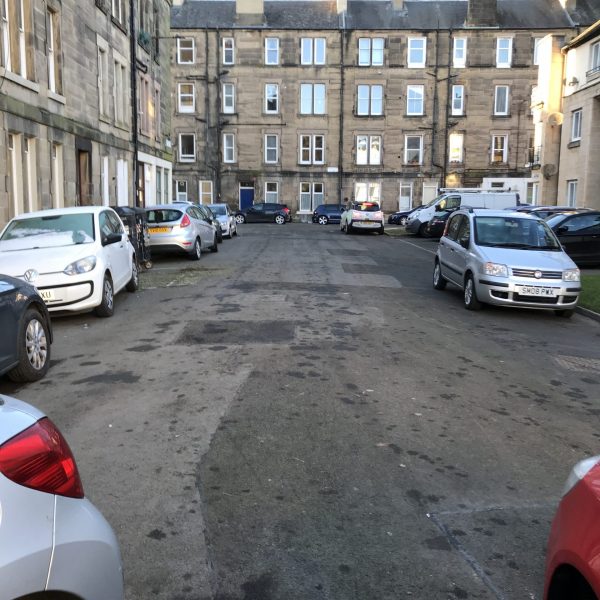 It was now after 3pm and I had to be online for Performers and Speakers arriving for the event at 4pm.  I cycled non stop up the Royal Mile, arriving back at Discovery at 3.30pm.  Totalling 22.38km cycle (that’s nearly 14 miles) in 1 hour 55 minutes (without the stops to chat, etc…).

Honey was really happy to see me, grabbing her toy (“My Crocodile”) and dropping “him” in the canal – I guess that’s where crocodile’s are meant to be, in water 😉 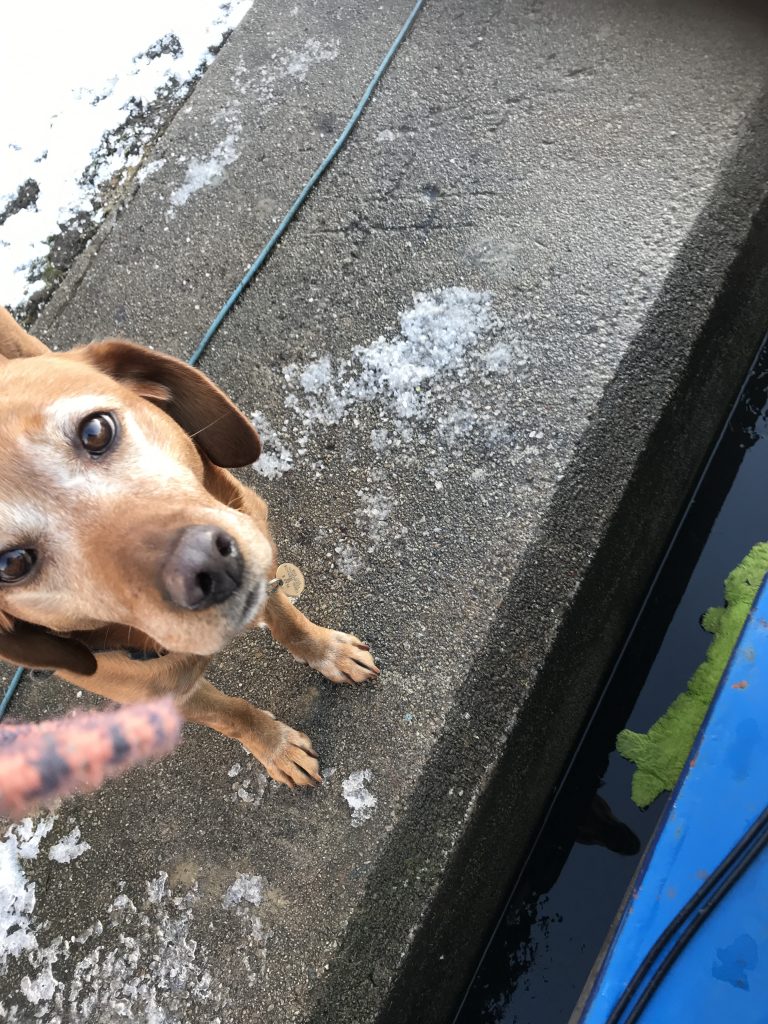 I think the crocodile is still outside on Discovery, will have to remember to get “him” in !

Then another quick walk with Honey and a quick chat with Helen my neighbour.  It was now 3.55pm, capturing the sun going down 🙂 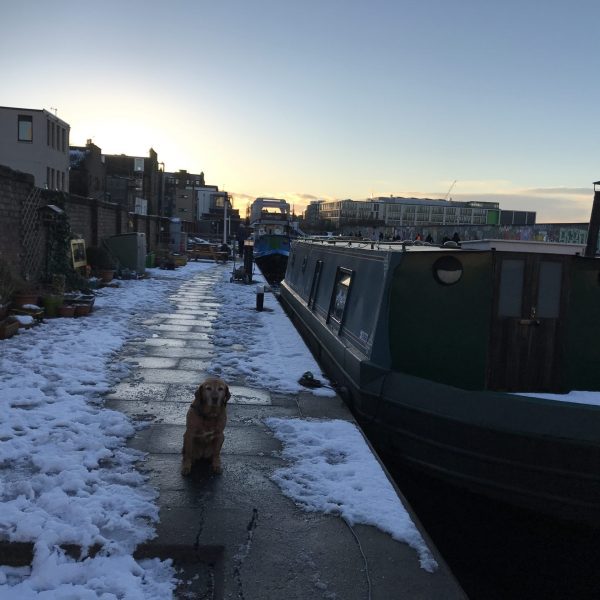 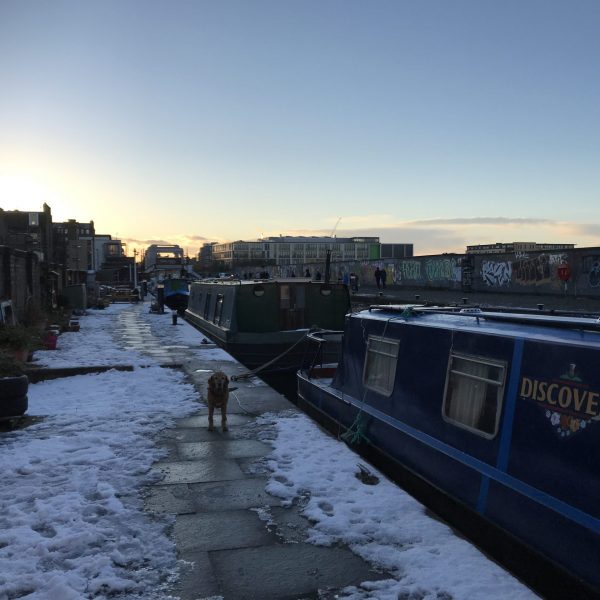 The event was great, with 144 people at it.  Prompting people throughout, in the chat, to enter the raffle. 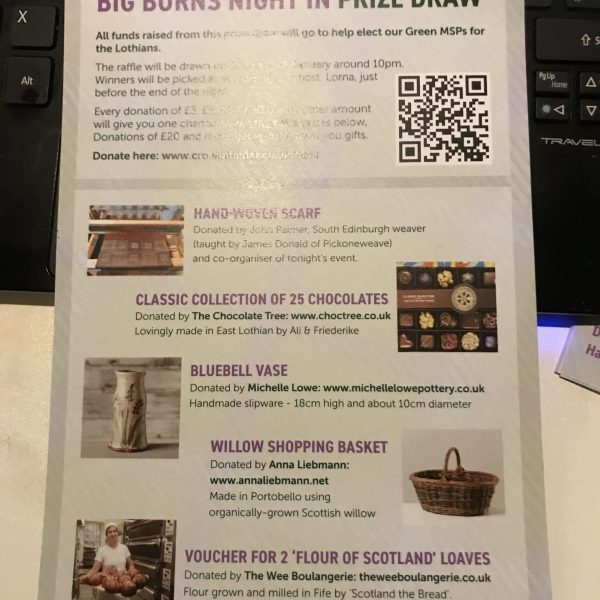 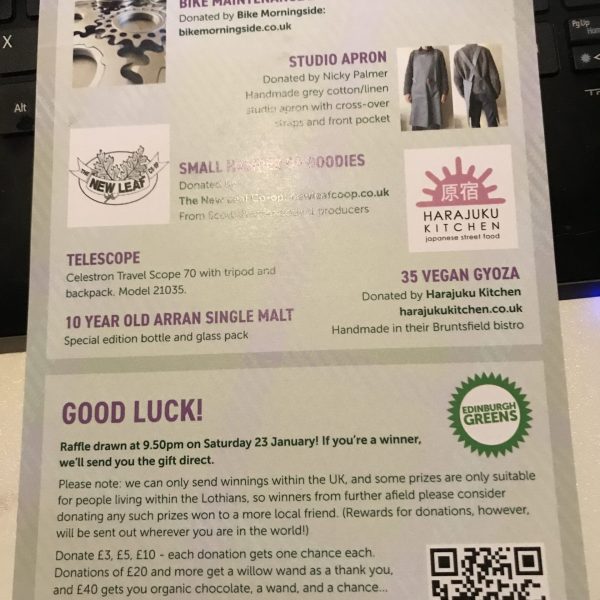 I entered the raffle in Hannah’s name, just in case, I won (I didn’t) and there would be cries of it being fiddled!  We got all the names of people who had paid some money (how ever much) and Robin printed off in a list.  Then I number generated numbers (from 1 to 96, that was the total number of names on the list) and shouted the numbers out, with Robin then looking on the list to see what person corresponded to that number.

Just before the draw started, my bluetooth wireless headphones said “battery low”, after the first number, they died and I was now unable to hear anything!  But quickly managed to swap to my bluetooth speaker and all was OK.

At the very end of the event, just as everyone was saying Goodbye, my Mobile WiFi Box ran out of battery – phew – just in time!  But after a bit of charge I logged back in for chat with the ‘hard core’ folk who were still there. 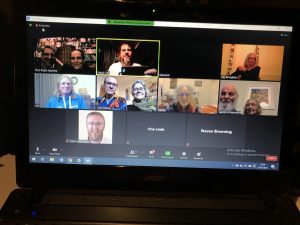 “Er Jim.. want to rethink your comment about the dancing shirts??

For a fact, I saw you wearing at least 4 different ones in the one days festival last year!”.

No way!  I can’t believe you remembered that 🙂

“Hello there ! Great photo of Hannah and You at the top of Arthur seat!

And great pictures of the snow !!!

Defo agree with Gez , loads of clothes I stopped using including fancy dresses and flowery shirts!
Passports though are useful for new Scots who need emergency trip back to their first home

Thanks Mystery Guest!  I think everyone would agree they are wearing less clothes ! 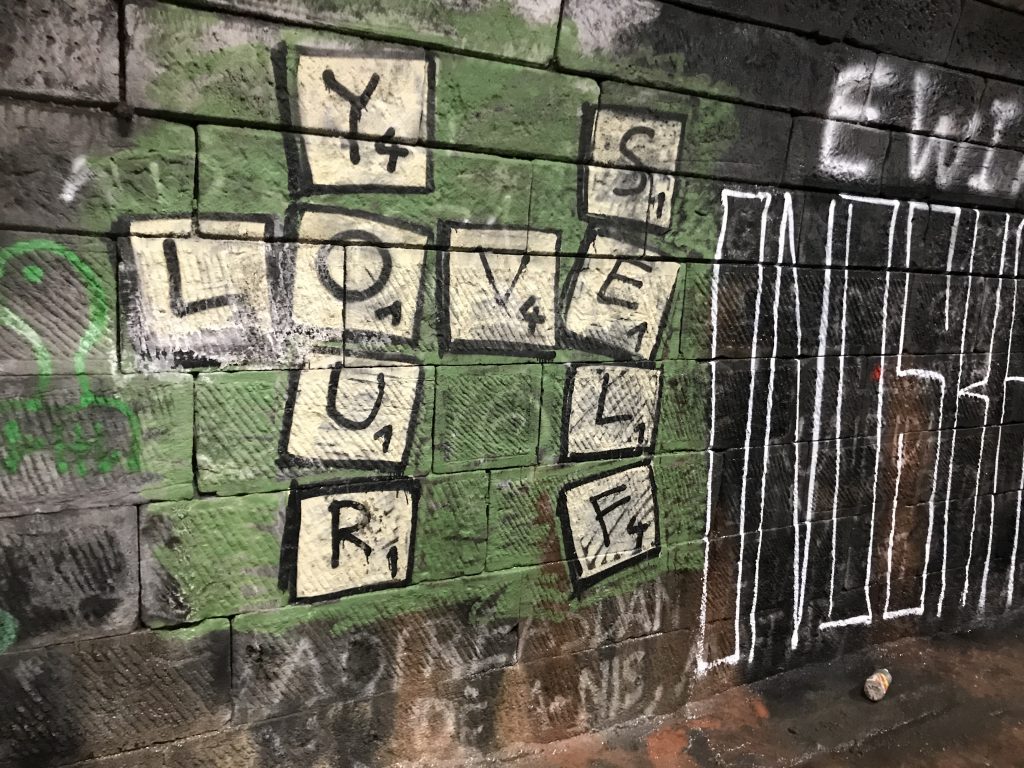 As I come to the end of this blog, I am feeling exhausted, but what a great day!  The cycle this morning was amazing – cycling with a purpose and with clear blue sky and crisp coldness in the air.  When I started cycling, I became aware that you can be waiting at traffic lights with quite a few other cyclists, so I decided to wear a face-mask for the whole cycle.  It can get quite hot with a mask on cycling up hills!

My bike, which was given to me (from Danny), is not the most comfortable – the seat and handlebars are stuck, they won’t move.  The seat is higher than the handlebars, by quite a bit, so I have to cycle bending down, lifting my head up to see ahead.  This leads to a sore neck!  If I cycle sitting upright, my arms are stretch right out and they get sore, with me sliding off the saddle!  I will have to take the bike to a bike shop to see if I can get it fixed.  Plus, the gears don’t work so well, so have to cycle in a low gear all the time, which involves a lot more peddling!

Today it has been clear blue skies all day and cold – the canal has frozen again.  A few times this evening, the sound of a few weeks ago is back – which sounds like someone is banging the side of the boat with hammer, when in fact it is someone further along the canal, hitting the ice to see if it can break.  It is very unnerving and quite disturbing!  The sound travelling along the ice from quite a distance.

Hope you’ve had a Super Saturday.

“I hired Jim for a private student event in Edinburgh. And wow! What a night! He was highly professional and was the highlight of the evening by a considerable distance. Everyone there found him hugely entertaining and absolutely loved it. He’s an incredibly talented, skilful magician, with an endless range of mind-boggling tricks. Would certainly recommend him for any event!!”