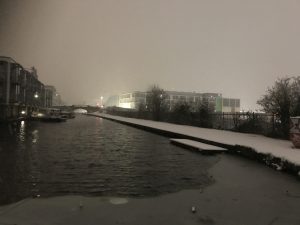 At the end of yesterday’s blog (Day 303) I excitedly wrote that I had looked out the door and it was snowing!

However, unlike the day before, I ventured outside without my phone deciding not to take some blog photos on our bedtime walk.

But, I was delighted to find that it was proper snow, not the slush falling from the sky like the night before (see yesterday’s blog Day 303).

In fact, it had snowed a lot already !!

Honey was quite wary leaving Discovery, perhaps getting memories from Day 281 when she slipped on the snow and fell in the canal?  She kind of seemed nervous to leave Discovery, not wanting to take the step the shore, but with some encouragement she made it 🙂 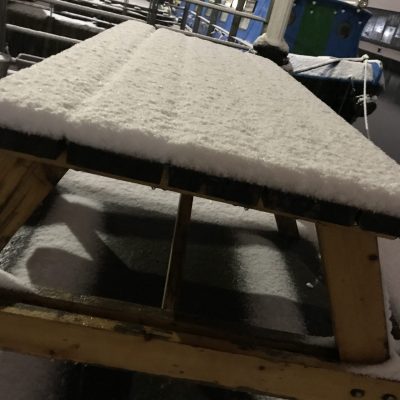 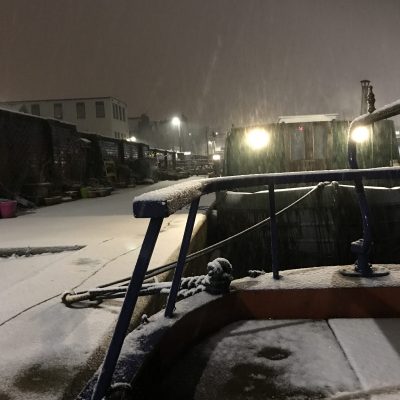 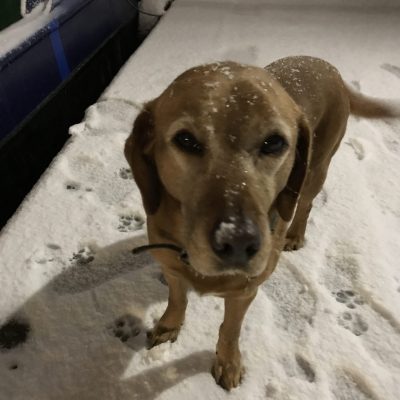 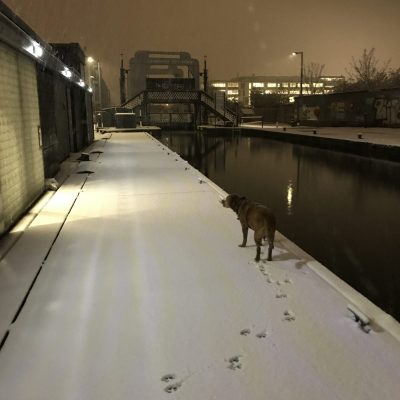 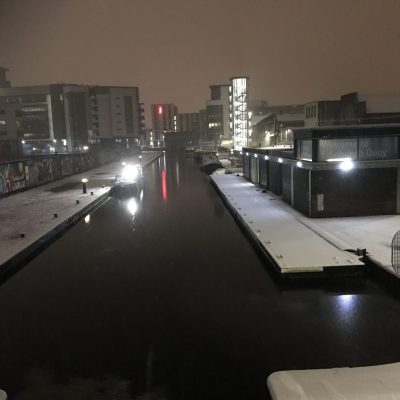 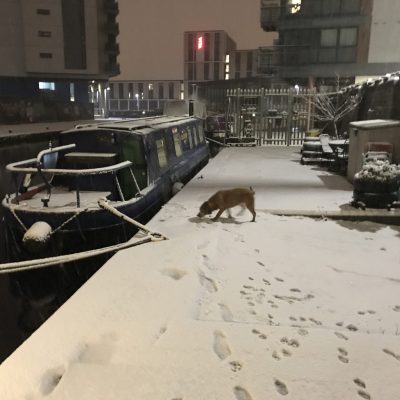 Before going to bed, I cleared Honey an area to get on and off Discovery for the morning. 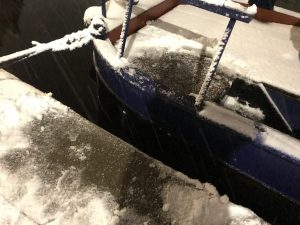 It was 5:50am when my clock radio came on this morning, BEFORE The Chris Evans Breakfast Show!!  As I slowly woke up, the presenter posed the question – “What is a baby rabbit called?”.  Then the second alarm kicked in (beep – beep – beep) and the radio went off.  When it came back on at 6:03am, I had already drifted back to sleep, but the presenter was giving the answers that people had suggested – bunny, leverets, litter – then gave the correct answer.

Do you know what it is?  Hannah impressed me later, knowing the answer – it’s a Kitten.  I didn’t know this – the surprise woke me up!

And so I got up at 6.10am, I hesitantly opened the curtains, expecting to see it raining – but in fact it was still snowing and looked like it had snowed all night!!  I wrote a message to send to my sister, to show her the snow, but then thought she would probably be asleep and didn’t want to wake her – so didn’t send it. 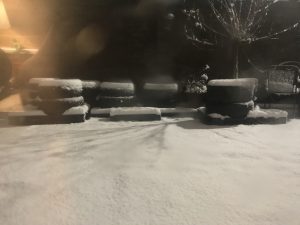 I got dressed and Honey and I went out for our morning walk – it was still dark.  It was also still snowing !! 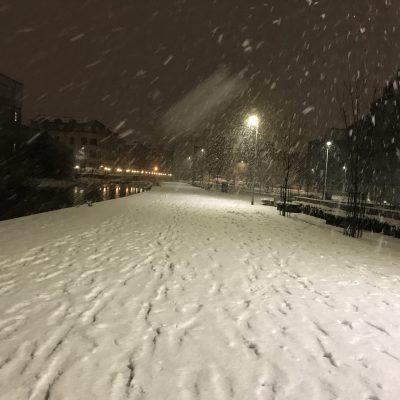 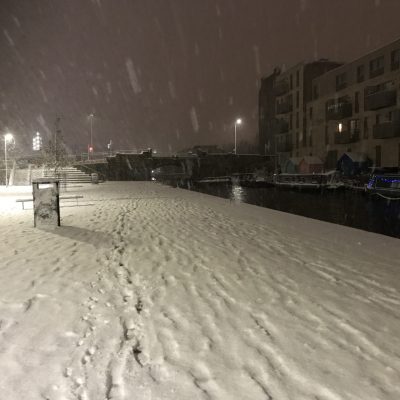 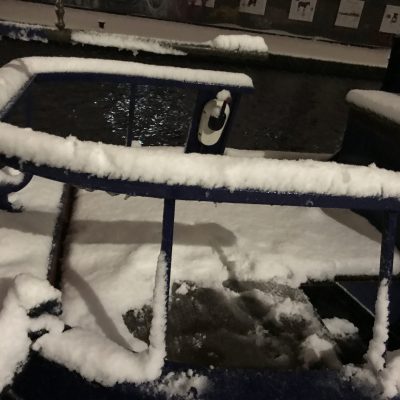 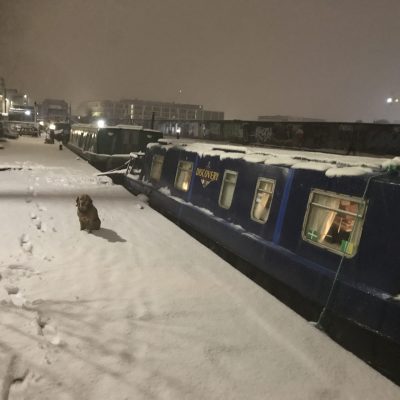 I had some breakfast, lit the fire and then left at 7am to cycle to my flat.

Very quickly I realised it was going to be a treacherous cycle – it was fine on the areas of snow, but crossing into tracks where a car had already been, became very slippery.  I decided to take the main roads, as The Meadows and Royal Mile would probably not have been cleared.  But I found that Lothian Road had also not been cleared!

By the time I reached Princes Street, I had a very real understanding of why mudguards exist on bicycles!  My bike has none and they are mountain bike tyres – my trousers and boxer shorts were soaked 😉

As I headed down Leith Street, I was surprised by the amount of people out and about at 7.30am – I guess all commuting to work!  There was also quite a lot of traffic on the roads.  Reaching my flat at 7.40am, I started to take everything out the flat into the stairwell.  By the time I had finished that, Hannah had not arrived, so I took most of it down the stairs and outside.  I then had a wee walk around the cemetery, and then saw Hannah was on her way up the street in her van 🙂

Hannah bought a yellow minibus a few months ago and is slowly renovating and turning it into a living space.  It’s taken her a long time to remove all the seats!  This was the first time Hannah had driven in the snow let alone in her big van!  The van is a rear wheel drive, coupled with it being empty the wheels were spinning loads on the snow – but with a bit of pushing from me, she managed to turn round and park.

We then loaded the van up and headed to the Recycle Centre. 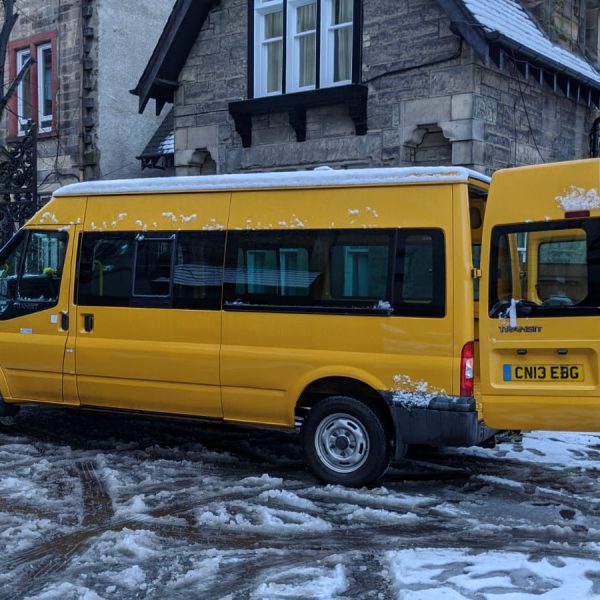 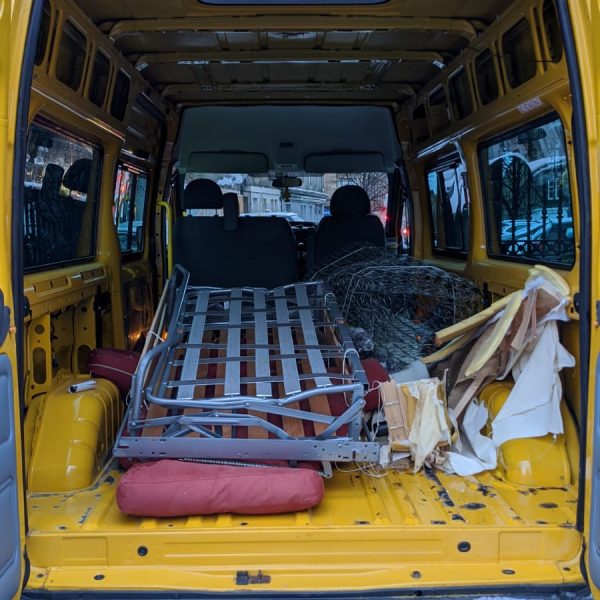 Vans are only allowed to use the Recycle Centre between 8.30am and 9.30am, hence the early start!

I felt super honoured to be travelling in Hannah’s new van, she later explained only her mum and flatmate have also been in it.

Hannah had never been to the Recycle Centre, so it was a treat for her too 😉 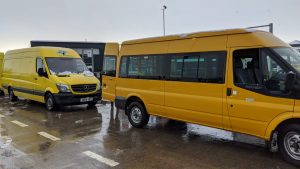 Then we headed back for Hannah to see the newly painted flat and carpets – Hannah chose the carpets (on Day 265) and also helped with the paint colours – she’s good with interior design !

I spent the rest of the day assembling furniture that I had dismantled to fit in the kitchen (Day 297).  Finally arriving back at the canal about 4.30pm and took Honey for a walk.  Honey already went out for a walk with Helen this morning (blog cover photo).  The fire was still going and Discovery was 22 degrees centigrade – result !!

By this evening, most the snow had turned to slush 🙁 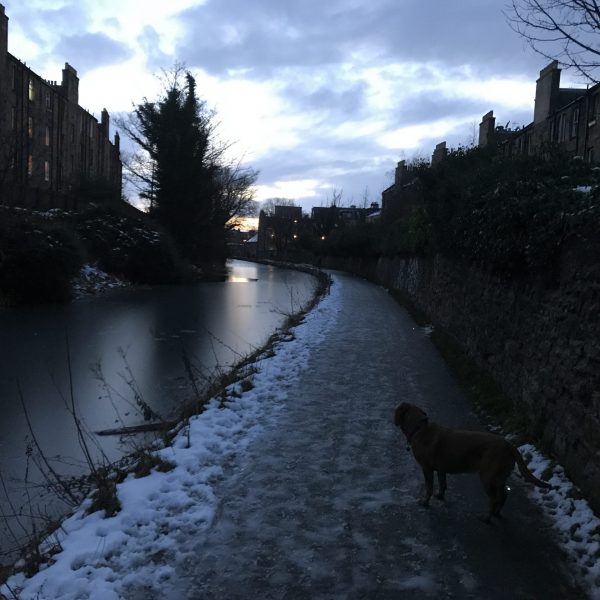 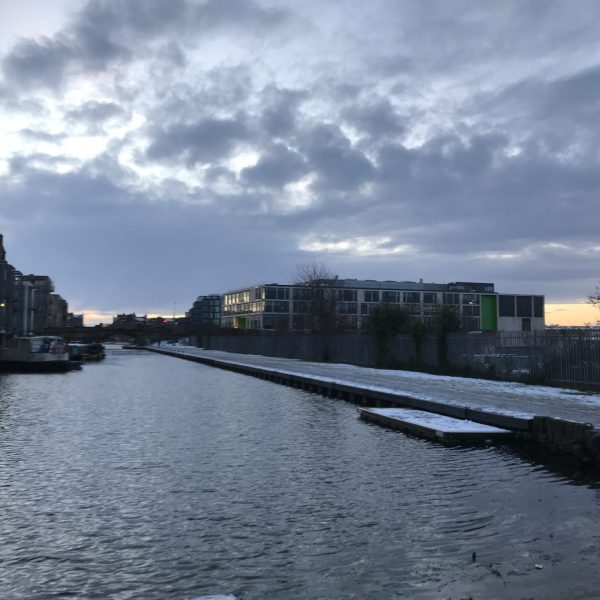 Things We No Longer Use

What have you stopped using since lockdown began in March 2020?

Today, in theme with the weather, what we didn’t hear today on the news, due to the snow was Massive Travel Delays.

Usually when the country wakes up to lots of snow, transport grinds to a halt.  We hear of trains stranded in the snow with hundreds of passengers on board, commuters stuck on motorways all night due to the snow, gritters working overtime to keep the country moving and stories of people stuck at airports all night due to snow disruption.

Where as today – there has been none of this in the news – because we are to ‘Stay at Home’.  Commuters are not jammed into trains, cars are not using motorways, people are not travelling abroad on aeroplanes, so gritters don’t need to worry.

It’s not exactly something we no longer use, but it fits with today and the theme of the section.

What do you no longer use since lockdown began?

My sister, Anna sent me a painting of the Birthday card she made for her, with The Paint Republic, saying:

“The card I have done for Mum’s Birthday, thank you The Paint Republic”. 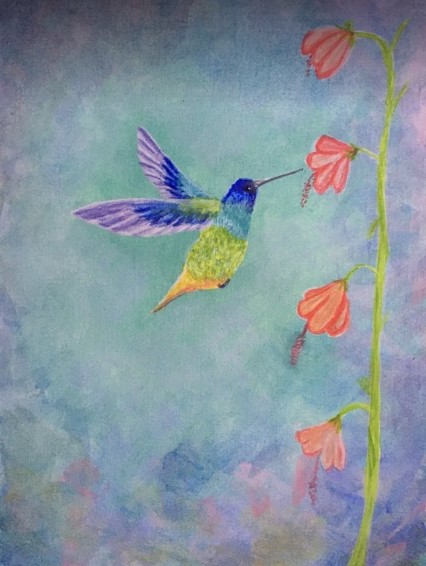 Less that two months until my Birthday- hint, hint 😉

Theo posted a Facebook comment on yesterday’s blog (Day 303) in relation to ‘Things We No Longer Use’, saying: 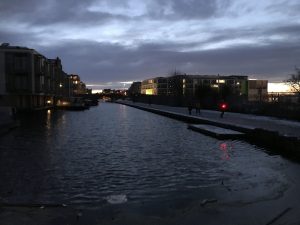 As I come to the end of this blog, I am totally exhausted.  After coming in from our evening walk and sitting on the sofa, the tiredness hit me!  It’s been a long day, but I’ve thoroughly enjoyed it 🙂

Compared to the snow at the end of December (Day 281), it hasn’t lasted.  There were a few snow people sculptures scattered about and in The Meadows, but a lot less compared to previously.  It’s been a lot warmer and so it melted quicker, plus I guess most people were working or at ‘school’, so no time to play in the snow.  At least we missed the high winds and heavy rain from storm Christof, although I think the snow came from Christof?!

The flat is definitely coming together – I think I have found a Corner Sofa to go in the living room, then need to buy some curtains/blinds and finish tidying up the place and the flat will be ready.  Oh – and get the laminate down in the Kitchen, Hannah is giving that to me, which is coming from her kitchen 🙂

I am enjoying cycling everywhere again, despite no mudguards and a wet bum!  Today, my feet got really wet too, so I have had cold wet feet for most of the day, despite having my walking boots on.

For me, the week has zoomed by, I can’t believe it is Friday already!

It’s only 9pm, so I will be going to bed early tonight 🙂

“Jim was fantastic at our office event. We were all blown away with his tricks! I cannot recommend Jim enough. He is very talented and really knows how to wow the crowd. Brilliant night had by all!”