From the early 1900’s a popular place for Edinburgh residents to visit for day trips and holidays was Portobello beach.  Portobello is less than 5 miles away from Edinburgh city centre, but I guess, as transport was so much more limited back then, it was a long way to travel?!

Below are some postcards I found online, from around that time.

Today, I felt I was following in the footsteps of those Edinburgh residents, as I went to Portobello beach!  Since lock-down began I have not left my local vicinity.  The maximum radius I have travelled is less than 2 miles.  So travelling 3.5 miles to Portebello beach felt a long way!

Although I often go to Portobello outwith lock-down.  Today, it felt completely new!  I was seeing everything through ‘new eyes’.  As I explored a completely different area of Edinburgh. 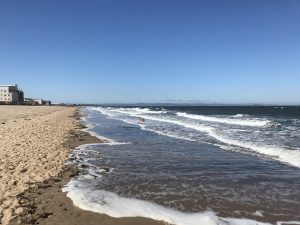 Despite the sun shining all day, today, with blue skies.  The postcards above, do not depict how Porobello beach was today – it was virtually empty.  Which obviously will keep the Scottish / UK Governments happy that most people are staying indoors!

So this morning I woke up to my alarm at 8.30am.  I had my Sunday meditation group.  I still felt completely exhausted, realising that I have spent too much time on my computer this week.  I felt reluctant to join the meditation group for another 2 hours of screen-time, but concluded that I would enjoy it when I was there.

However, when I came to login.  The Zoom password was not recognised.  I tried all combinations and still no success.  I text the organiser and she said everyone else had got in without being asked for the password.  But it wasn’t working for me.  I switched my computer off and restarted it.  Still the Zoom password didn’t work.

Then I thought – that actually I would enjoy the two hours being free of screen-time.  Concluding that ‘the universe’ was causing the block.  So I took it as a blessing and returned to bed for a while!

I then decided to go for a long run to Portobello with Honey the Dog.

On my way out, I saw my neighbour, who said he is sure that he saw an Eagle flying over the graveyard this morning!  He wasn’t sure and I suggested, maybe it was a buzzard?  No, he knew what a buzzard looked like.  But he said he thought Eagle’s were smaller than what it looked like.  Was it a Golden Eagle?  Who knows, but its lovely to hear unusual wildlife is coming into the city.

Then I started my run (well maybe jog) with Honey the Dog.  The first 5km I ran pretty hard.  It felt like my energy in the last few days has been building and building like a pressure cooker – I needed to just run it all out.  5km (3 miles) in 28 minutes!

There is a lovely route, which is along ‘Restalrig Railway Path‘.  It is part of miles of redundant railway routes that criss-cross across most of the city.  The strangest part is as you head along you go under lots of bridges, which is where the road goes above.  But most the bridges look the same.  So you really have no idea where you are.  Many bridges have a sign naming the road, but you think to yourself “I don’t remember seeing a bridge on that road”.  Generally these paths are hidden to the road almost completely!. 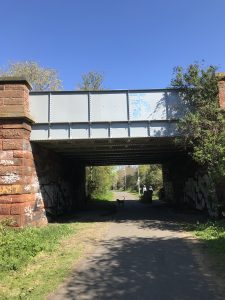 It was a suntrap as we headed along them – with no wind at all, so super hot.

I wondered, whether those travelling to Portobello back in early 1900s used this same route, but on the train?!

Then out where the Eastern General Hospital used to be at Seafield.  When ever I pass that part, I remember shifts I used to do at the hospital in 1996-1997 as a nursing assistant when I worked for a nursing agency.

A small part along the road and then you pick up the sea path to Portobello. 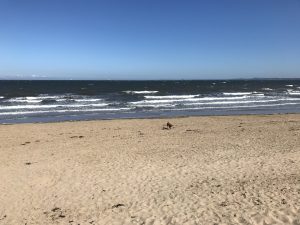 Just arriving near the start of Portobello at 5km of my run today.

I then walked and jogged along to the end of the promenade and back along the sand.

Like me, Honey the Dog LOVES being by the sea.  She went swimming, although I had to keep calling her back, as she goes quite far and the waves were pretty big (for a small dog) as it was so windy.  See YouTube videos below.

Today, a new YouTube commented from Todd who said “awesome content keep it up bro, let’s be yt buddies and collab :DD“. 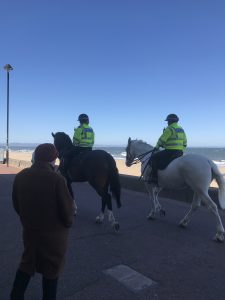 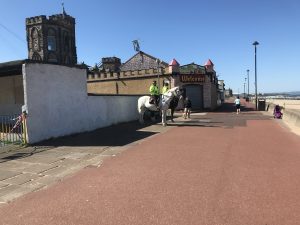 As we headed back along the promenade a couple of police officers patrolled on their horses.  Danny had mentioned a few days ago this happened.  But I assumed, they were patrolling on bicycles!

First police patrol on horses I have seen on lock-down.

This is what I was saying earlier.

Different area of Edinburgh and different things happening.  Felt like I was on holiday in a differernt part of the world, instead just 3.5 miles from my flat! 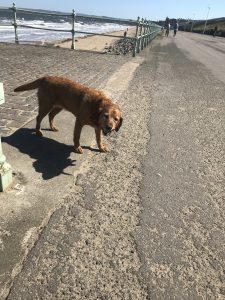 Then we stopped for an ice cream and Honey the Dog chewed through two of her favourite Portobello delicacy – Seagull Wings!!  Just a note – you can’t buy these – she finds them on the beach, washed up from dead seagulls.

I shout at her to stop, but she just runs away!  Hearing the crunching of the wings

Then a gentler jog all the way back home.

As I arrived back on Easter Road, the air felt stagnant – more what I associate with a city.  It made me realise, how I need to get down to the beach more often.

But, most importantly, my energy is now feeling so much better 🙂 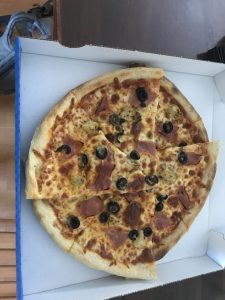 Then we headed to Mo Beans Coffee Shop (which is usually shut on Sunday’s but Mo had said he would make me a pizza today as I missed getting one yesterday).  If you live in Edinburgh, I can highly recommend the 14 inch lock-down take-away pizza that Mo is currently offering, for just £6.  You can choose 3 toppings – Ham, Turkey, Tuna, Pepperoni, Prosciutto, Onions, Pepper, Olives, Sweetcorn, Tomato, Oregano, Artichokes, Sun Dried Tomatoes, Mushroom or Rocket. 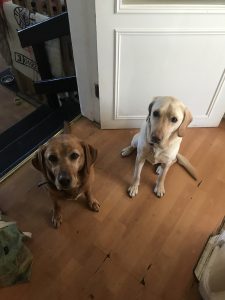 A hard decision – took me over 10 minutes to decide – can’t actually remember what I had!  Think it was ham, artichokes and olives.

Mo’s coffee shop is open Monday to Saturday, 11am to 4pm during lock-down for take-aways.

Honey the Dog was reunited with her pal who lives in the shop – Nuno!  They used to see each other everyday.  This is only the second time she has seen him since lock-down!

Then to Easter Greens for Kombucha.

Arriving at the outside of my flats, I had a pleasant surprise.  My woolly winter hat was sitting on the grass.  Haven’t been able to find that for months – unsure how it ended up just outside the flats on the grass!  Maybe ‘the universe’ looking out for me again 😉

After sharing Fi’s photos yesterday from The Isle of Canna, I have decided to come up with a ‘Readers Corner’ in the daily blog.

Readers Corner is a place for you, the readers, to share whatever you want – photos, thoughts, comments, quizzes, etc…whatever you want.  It is your space in my blog.  Please email (jim@beyondbeliefmagic.co.uk), message me on Facebook, add a comment at the bottom of this blog, or even text me (0773 984 3706)! 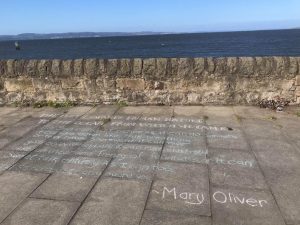 Today we have two feature in Readers Blog.  The first is from my friend Brian.  He was out and about around Leith this morning and wrote:

“Another new feature of lockdown. Poetry on pavements. I am seeing it all the time! This was next to your favourite haunt, the Old Chain Pier!”

I personally have never seen any poetry on pavements.  So a lovely thing to share.

The other feature was from Phyliss Stephen who writes for ‘Edinburgh Reporter‘.  She included yesterdays blog in ‘Cornoavirus live news: week beginning 13 April 2020‘.  Writing “We just love Jim’s blog and he is going to be our podcast guest this week…!”.

So as I come to the end of today’s blog.  I have had another busy day, but very little time on my computer!  I am feeling so much better for it.  It’s good to be out and about, rather stuck in my flat.  Even better still a day trip to Portobello!

The sunshine seems to lift my mood.  I’m kind of glad I didn’t get out for long walk/run yesterday, made it even more special today.

As I reflect on another week of writing this blog, I wonder how others around the world are experiencing lock-down.

The UK has an approximate population of 67 million.  So what we are experiencing is just 1.5% of all those in the world on lock-down!

I feel honoured that I can share my tiny world with those who read this.

Please do share whatever you want for ‘Readers Corner’, so I can grow this.

P.S. Morning and Bedtime Chi Gong still continues everyday in the week (Monday to Friday).  If you want to join us, please do get in touch and I will send you the Zoom login details.