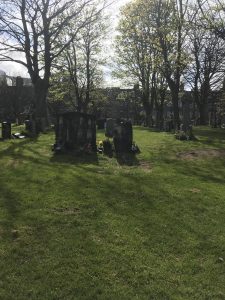 Today is Saturday, my only day that I have a lie in and have nothing to do!  But not today, this evening I was working as a Doorman / Bouncer / Sound Technician at a Virtual (Zoom) album launch for my friend Majk.  Will talk about that later.  It’s been a super sunny day today in Edinburgh, although still quite cold, when not in the sun.

Honey the Dog didn’t wake up till 10am.  She’s learning that Saturday’s are a day of rest.  I told her enough times last night, that we were not going to be getting up early!  So we didn’t get up till 11am.  For a morning walk around the graveyard.

As always, it was a lovely still and silent walk.  Admiring the trees and sunlight.

I came across a very shiny gravestone and found myself standing for ages, looking at my reflection in it.  It was kind of interesting, standing in a graveyard, seeing my ghostly image in the gravestone.  As if I was seeing my spirit/soul!  Check out the photo..can you see me?

I had planned to go for a long run this afternoon to Portobello, but when I looked at my phone at 3pm, it only had 3% charge, realising that it must have not charged properly through the night.  So, I put it on charge and lay on the sofa and watched some TV. 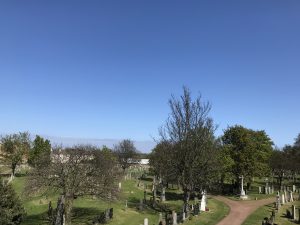 At 4pm, I returned to my phone to see it was now on 1% even though it was charging!  I looked online to see what the problem was and it was something to do with the Sim Card.  So I took it out and put it back in.  By now, time was running out.  My Doorman gig was at 7pm and my inspiration for a run had gone.

Felt a bit of a shame, as it was such a super sunny day.  But hey we are told NOT to go out if it’s sunny and hot.  And I checked the weather forecast – tomorrow is another sunny day 🙂

So we went to Easter Greens for Kombucha.  Honey the Dog saw Izzy.  Then we went to a wee park that I know nearby, which I call ‘Kate’s Park’ as my friend Kate’s house backs onto it.

Then home, dinner and got ready for the concert.

I have no inspiration to write this blog today, but hey – I didn’t go for a long walk or run – that’s when I find my blog inspiration.

For my regular blog readers, you will have read about my friend Fi.  She is the avid Quiz Solver!  Fi lives in the Isle of Canna, a small island in the Inner Scottish Hebrides – part of the small isles.  Canna has a total of 16 residents!  Check it out online.

She sent me some lovely photos today, it’s been a glorious day there.  The first of her eating her lunch and the other as the sun went down.

If others of you want to share some of your photos, please do so.  I could create a regular feature of photos of my blog readers from around the world! 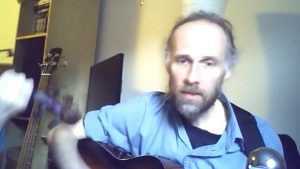 Majk Stokes, is a comedy singer-songwriter and eco-warrier.  Tonight was a concert to launch his second album “Time to Save the World”.  He was going to have a real life concert, but with the current lock-down decided to go virtual.

As I have spent considerable amount of time learning how to use Zoom (about 10 hours in last 3 weeks), watching the many Zoom Support Videos (highly recommend if you want to learn more) and as my Zoom account allows up to 100 participants for unlimited time, he asked if I would host it. 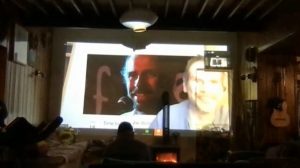 We had a couple of meetings to discuss all the different parts of it.  We agreed, that I would mute when he was talking and unmute when everyone was clapping.  And various other things.

He emailed me a Guest List this afternoon – 75 people!  Wow, I wasn’t expecting so many people.

Generally my role was to sound check, record the whole thing, let people in from the waiting room, kick anyone out who was being disruptive (in-case they were a hacker) and mute/un-mute everyone.  A 1.5 hour concert. 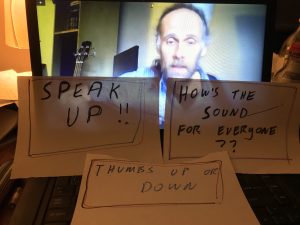 It was an awesome gig.  Majk on the guitar with his comedy songs, with some guest appearances of his partner, Beth, joining in on the fiddle.

Was great fun, but exhausting!

Throughout the whole concert there were at least 50 people, the most at one time was 54 people!

It was quite a balancing act, muting and un-muting everyone.  Trying to gauge when the song was finished to un-mute.  Working out best time to mute again and then quickly un-muting Majk again so everyone could hear him!

At the start he was playing, but he was on mute.  I had forgotten to un-mute him.  I watched back on the recording of it afterwards and didn’t realise that my sound was recording.  You can hear me swearing when I realise that Majk was still on mute!!

I also created some signs to hold up at my camera to communicate with Majk and everyone watching!

My friend Robin, put the whole concert on his living-room wall.

Majk says his new album will be available virtually Monday/Tuesday next week on Spotify, iTunes, etc..

And if you are looking for someone to host your Zoom event or concert get in touch.  I have experience in sound checking, recording, doorman, bouncer and Zoom housekeeping 🙂 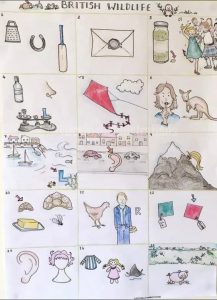 Fi has shared a new quiz for us all to do.  It is a ‘British Wildlife Quiz’.

Very apt – all the way from the Isle of Canna!

So as I come to the end of my blog, I am feeling super tired!

The One World Virtual Concert is currently playing in the background, but I am not feeling inspired to listen to it.

For those who didn’t hear about The One World Virtual Concert.  It is an 8 hour event by the Global Citizen movement and the World Health Organisation, live streamed and broadcast on TV.

The concert, includes a 6-hour pre-concert, followed by a 2-hour concert.  It is described as a “star-studded global event to support front line workers tackling the cornavirus outbreak, with over 100 artists”.  Including The Killers, Sheryl Crow, Annie Lennox, One Direction, Rolling Stones, Lady Gaga, to name a few.  All playing from their homes.

I wonder whether they had any sound muting problems? 😉

I think I am getting tired of everything virtual !!  I need to find a balance between the real world and the virtual world.

I have always found it hard to feel connected to people virtually.  I much prefer using the telephone!  I have been surprised by how I have adjusted to to the virtual world since this lock-down and have loved the connections through Zoom.

But I think I need a balance between real world connections, phone connections and virtual connections.