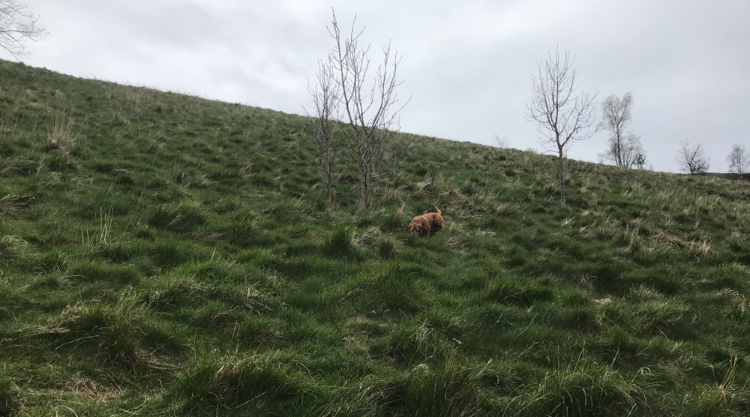 I usually post the main photo of my daily blog, with the best photo I have taken for the day, with Honey the Dog in it.  But today, I haven’t.  A few years ago, I got really into taking some amazing photos whilst out on my daily walk with Honey the Dog.  I would post them on my Twitter feed and got quite a following!  Check them all out here – https://twitter.com/jimwcampbell

I was proud that all the photos I took which posted on my Twitter Feed were with my Android phone, without filters.  When I changed my phone to an iPhone, I found the photos were not so good.  The iPhone was changing the light, especially when pointing straight at the sun.  There is probably a way to change this, but I couldn’t work it out.  So I stopped taking photos.

So today’s photo at the top of my Blog, depicts my mood and energy today!  After such an energised day yesterday, my mood today has been flat.  It’s been cloudy all day and pretty cold!  If it wasn’t for Honey the Dog I wouldn’t have gone out at all for a walk.  However, the walk was quite lovely, despite having no energy, as I struggled along the road. 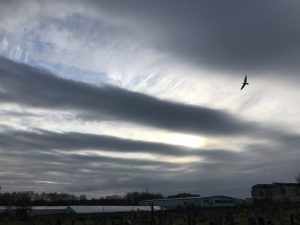 Despite not going to bed until 1am last night, I still was out of bed by 7.45am this morning for a walk round the graveyard with Honey the Dog.  It was actually a really nice morning and I caught a lovely photo of the clouds and sun poking through (see photo to the right).

I spent ages trying to capture the right photo with that seagull in it.  I think it is just right.

I managed to stay awake all day (again) without an afternoon nap and despite feeling more tired today, it certainly makes me feel better and means I will sleep well tonight! 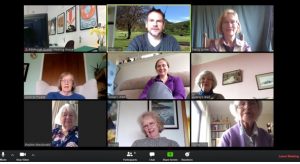 Once every 2-3 weeks, my friend Rachel has a Coffee Morning in her house.  It’s predominately, people who have retired, as it is on a Thursday morning and the younger generation are at work.  But being self-employed I often go along.  Rachel is a fantastic cook and we are all supplied with loads of cakes, scotch pancakes, savoury dishes, etc…and lots of fresh coffee!  The one condition Rachel says about coming along, is that you don’t have breakfast!  I always leave, completely full, so much so I usually don’t need to eat until tea-time!

Today her Coffee Morning was virtual on Zoom!  Sadly, no cakes – but I had plenty of my own coffee!

For the next few hours, I recorded me speaking each of my blogs, for the Deepness Dementia Radio station.  Its great to read them all again so thoroughly!  Still quite a way to go until I catch up to today! 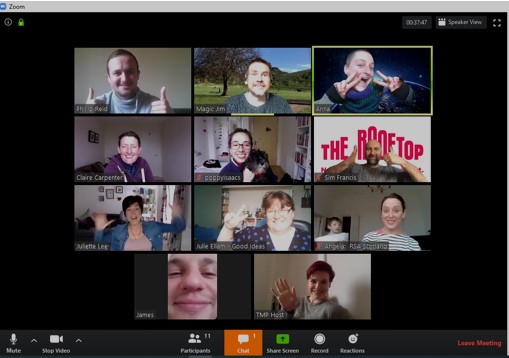 Then at 3pm, I went to Virtual Pot, afternoon ‘Tea Break’.  There was an important announcement so it was super busy.  The Virtual Pot is The Melting Pot‘s solution to keeping us all connecting during Covid-19.  The Edinburgh Melting Pot is the office space that I have been using for nearly 11 years.  As the founder, Claire Carpenter would say, it is a lot more than an Office Space.  It was one of the first Co-Working Spaces in the UK.  Not only an office space, but also a place to share and connect with others who are self-employed or work for small organisations who need an office space.  It is a great community to be part of, with last Friday of the Night Drinks night out, Christmas Night Out, Secret Santa and for a few years some of us used to play weekly Five-a-Side Football!

Following that, I read a message from my good friend Brian, who is a regular reader of my blog.  Although, I didn’t realise this until he messaged me today.  He has been reflecting on life during lock-down:

“The thing I have found wandering about is that you see so many new things and you are aware more of wildlife.  It fascinates me to think if animals have noticed that lack of traffic and people.  They must think it’s the strangest thing.  Or maybe they know something!!!!”

He went on and said:

“I’ve particularly noticed it on my regular walks around Leith Links…the other things is noticing buildings and murals that I’ve never seen before!  Like the Sikh Temple in Leith!  Someone was feeding the birds on the Water of Leith beneath Great Junction Street, which is normally clogged with traffic, but was completely deserted!”

It’s lovely to hear what others are noticing whilst on lock-down.

Please feel free to contact me about your experiences of being on lock-down!

So today, the UK government finally announced at least another 3 weeks on lock-down.  That’s good news for all you blog readers!! 😉  I have been pondering over the last week, when do I stop writing this blog?!  When do I define the end of lock-down?

A scientist said today that we would have to maintain some kind of social distancing until a vaccine is found.  Which is likely to be the second half of 2021!  Do I keep writing the blog until then?!

I guess, the moment to finish writing my daily blog, will become apparent in time, at the moment I am happy keeping going!

In the meantime, we can continue to be used to seeing all these familiar signs where ever we go! 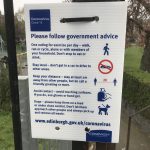 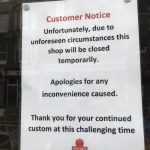 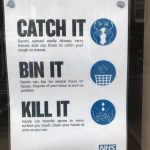 On my daily walk today, I realised I had gone out with odd shoes on!  I have them all at my front door.  It was only until I was quite a way from home that I realised the error.  Knowing, that the chances of meeting anyone I knew, would be slim I kept going!  I was right – I didn’t see anyone who knew me and no one asked me why I was wearing odd shoes!

One shoe was my running shoes (the blue one) the other was my flat soled 1mm thick puncture resistant ‘summer shoes’ (well, when it is not raining – they are not waterproof).  Both Vivobarefoot, so at least I had the same brand!  I made a video of me walking with them.

As I said at the start of this blog, I wasn’t in the mood to go for a walk.  So for a bit of motivation I tried to find something to listen to on Audible that would inspire me.  I found the perfect thing by Ram Dass called ‘Experiments in Truth‘.  I used to subscribe to Amazon Audible so have quite a large library to choose from!

I first came across Ram Dass talks in the late-1990s.  In those days they were tapes.  He produced hundreds of tapes based on talks and conferences he gave.  I used to have quite a large amount of them (I guess I still do).  He really inspired me, back in the day when I was living a more spiritual alternative lifestyle.  Ram Dass has such a warm calming voice.  He tells loads of stories based on his life, which are inspirational and often funny.

I found on my walk, that listening to Ram Dass it brought me right into the moment.  I felt myself admiring the beautiful colours of the yellow gorse.  It seemed so yellow and so bright.  I tried to capture it with photos, with no success.

I sat for a while and just enjoyed the moment.  The silence…the stillness…the peace…the beauty.  Watching the birds flying..the nature.  I took a video of it – which is below:

If you don’t know who Ram Dass was (he died in December last year).  He originally was a Professor in Social Psychology at Harvard University.  He then started to do work with Timothy O’Leary and did lots of work around psychedelic drugs, which for him was a kind of ‘awakening’ and discovery of different levels of consciousness.  I realise some of you reading this may place a judgement on Ram Dass now that you know he took psychedelics, but his journey and perception of it all is amazing.

So, he and Timothy got kicked out of Harvard for the work they were doing with LSD and Mushrooms.  And Ram Dass went to India, to explore Eastern Viewpoints in life.  When he returned to the United States he gave talks and ran retreats on his experiences and became a spiritual teacher.  It is much better to hear him talk, but here is something that struck me today:

“So what had happened was these few years we had gone through…the first experience we had felt we were going to be enlightened forever and then realising it wasn’t going to be that simple.  And for 5 years I dealt with the matter of ‘coming down’ …coming down.

And the coming down is what led me to the next chapter [in my life].

Because after 6 years I realised that no matter how ingenious my designs were and how high I got…[I always came down].  And it was a terrible frustrating experience.

What Ram Dass did – his “the next chapter” in his life.  Was to travel to India in 1967 and live a life of a Yogi and exploring life from this perspective, gaining insight into how we in the western world are so attached to our belongings, our past and the future.  He ultimately learnt to live and connect in the moment with no money and no possessions. 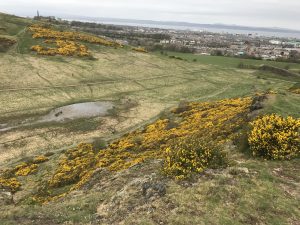 Are we all going to experience a massive ‘come-down’ after lock-down?  Is life going to seem so drab and disappointing, especially in the city with all the traffic, noise and pollution again?

What is totally apparent, is that if we are loving or hating this lock-down, when lock-down finally finishes, the impact of it is going to have a profound effect on all of us, in one way or another!

Something to think about for the next 24 hours until my next blog.