Today we have a Blog Special about the life and times of Thomas the Tartan Travelling Trolley Bag, which includes a special request to find him a new home!

In 2011, Brian and myself came up with the idea of a holiday round the Western Isles of Scotland, which we did as a fundraiser for the RNLI.  It was inspired from the books Twitchhiker: How One Man Travelled the World by Twitter by Paul Smith, Round Ireland with a Fridge by Tony Hawks and A Drift in Caledonia by Nick Thorpe.

The idea we came up with was to see how many islands we could get to, travelling around the Western Isles in 14 days, without paying for any travel on land or water.  Instead we were hitching!

We came up with the name ‘HitchHop: the hitchhiking challenge’.  We designed a logo, create a banner, stickers and even t-shirts.

We used Twitter and Facebook to promote what we were doing and I wrote a blog.  Although, what we didn’t anticipate was the lack of internet access on the islands and we found it hard to find places to charge our mobile phones.  So the blog, started to fall behind and eventually didn’t get finished.

We also got some media coverage before we left and once on the road.  Appearing on the BBC News, STV News and even BBC Alba filmed us for a news article.

In Tony Hawks’ book, Round Ireland with a Fridge, he found that everyone recognised him as the ‘man with a fridge’, so we decided to find something similar.  We decided on a trolley bag and so Thomas was born.  He quickly got the name ‘Thomas the Tartan Travelling Trolley Bag’.  As photos began to appear on social media and the blog, readers began to warm to him and he started to get lots of fans!

On our travels we gathered raffle prizes, which we put in Thomas to carry.  Once Thomas was full, we would have a spontaneous raffles – in pubs, hostels, where ever we were.  We raised £800 on the road, mainly from the raffles.

With Cal Mac‘s very generous offer giving us two free tickets for unlimited travel on their ferries for the full 14 days, plus a lot of road hitching, talking to people who owned boats, using social media and local news, we managed to set foot on a total of 100 islands in 14 days!!

At the end of HitchHop, Thomas returned to my flat and I am ashamed to admit it, he has lived in the bottom of my wardrobe ever since – forgotten and unwanted.  However, now that I am downsizing and moving home, we are looking to give him a new home, a new lease of life!  Looking back, we should have put him into an auction to raise more money for RNLI, but we didn’t.

But before you decide if you want to give him a new home, here is Thomas’ story.

The Story of Thomas the Tartan Travelling Trolley Bag

These are extracts taken from the blog that I wrote – https://hitchhop.wordpress.com

“Woke to perfect HitchHop weather…blue skies and lots of sunshine.

By 10.30am Brian, Thomas and I were heading up the road to the ferry.

Thomas quickly gained his name on Day One and has become a third member of HitchHop.

You will often hear one of us saying “come on Thomas” or “not long to go Thomas”.  As he follows us along the road.  I worry for his wheels, as they seem a little wobbly.  If they break, we couldn’t leave him behind.  We will just have to carry him.

I’ve already become quite fond of Thomas…he usually follows me as we walk on the road.  Mostly sits next to me in cars or even on my knee!  In fact, thinking about it, I think I prefer him to Brian.  He doesn’t answer back, people are always talking about him and is very photogenic.

But before you get any funny ideas.  My friendship with Thomas is completely plutonic.  He shares a tent with Brian!!

Thomas has become a key member of the HitchHop team.  He carries our food, merchandise and our extra belongings.  His two pockets are handy for Heb Celt Fest brochures to distribute as we go.

Like everyone who’s part of the HitchHop team, Thomas has a key role to play when we are hitching.  He carries the HitchHop banner and holds the RNLI flag.  Thomas has become one of us.”. 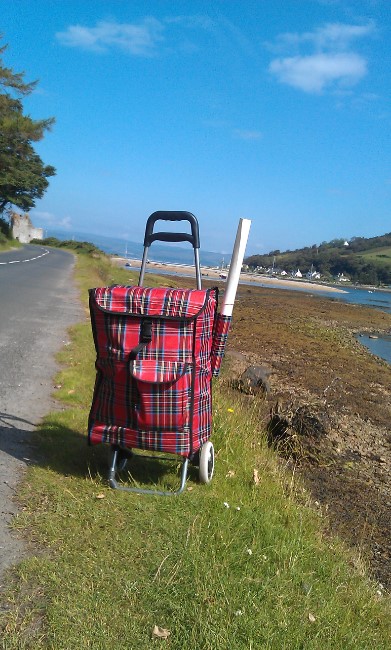 “We set ourselves up in the hitching position and it wasn’t long till we were heading up the road.  The lift wasn’t far and we were dropped at Kintraw, near a big marina.  Next to a giant wooden finger pointing the way.

When we got out, I was horrified to see a massive hole in Thomas’ side.  All his belongings were falling out.  The First Aid Kit came out and we safety pinned his side and then added masking tape (Brian’s bag had ripped earlier and he had purchased some!).”. 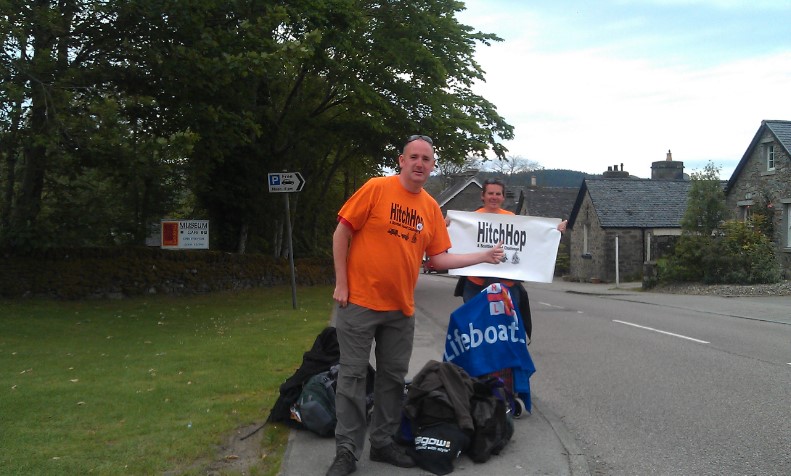 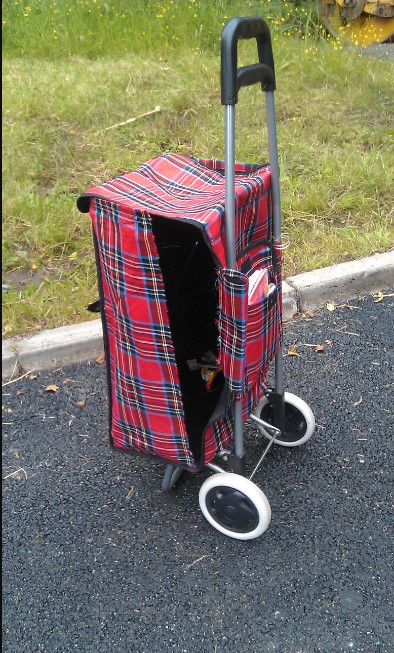 “We were quite late leaving the hostel at 10.30am.  And popped into Oban FM up the road.  We met Alan Campbell who gave us some possible island hopping leads, Robbie at Oban RNLI was one of them…he would know of anyone with a boat that could help us.

Then into the studio for the Alan Hunter 40s, 50s & 60s music show.  We came onto the radio after Max Bygraves!! The interview was broken up by music tracks and lasted about 20mins.  Thomas our Tartan Travelling companion Trolley bag was with us too and got a mention.” 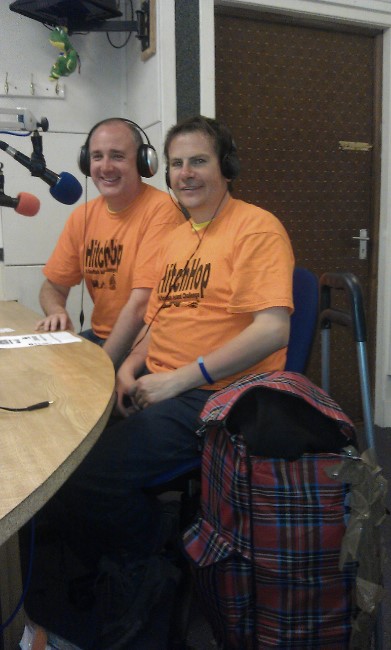 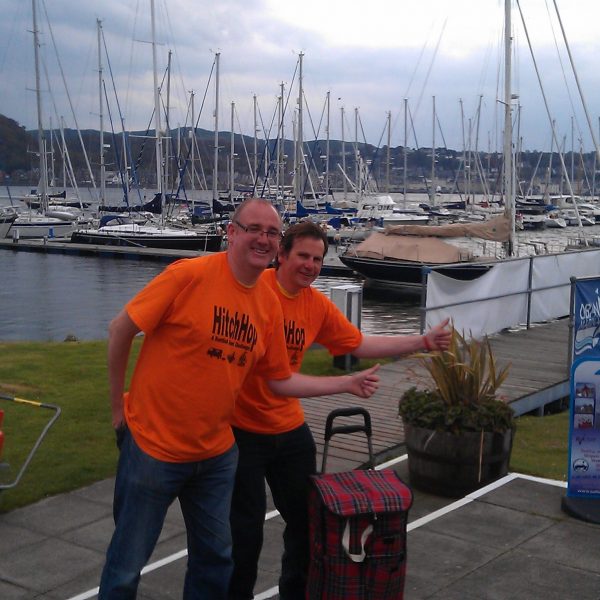 “It was still raining heavily when we got on the boat.

We slept most the way.  I fixed Thomas, adding a survival blanket to his inside, creating a new inner lining.  I found some more safety pins from people on the Cal Mac ferries and added new tape to him.  He was looking a lot stronger and hopefully would survive the rest of the trip.  The boat was very quiet, so we spaced ourselves out.  Brian slept most the way.”. 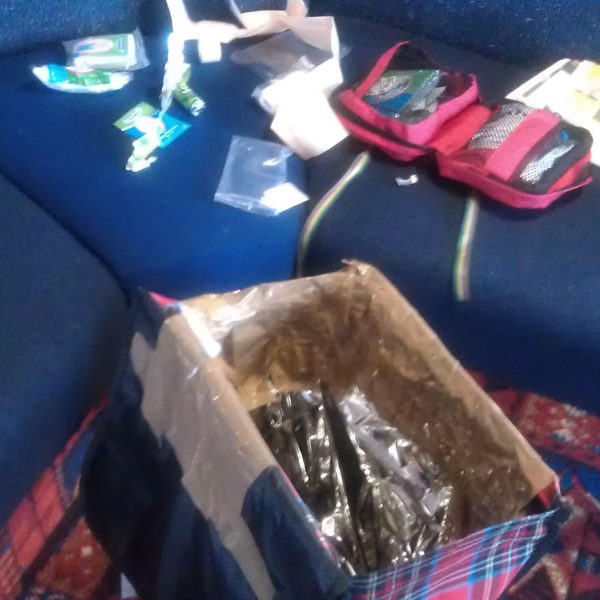 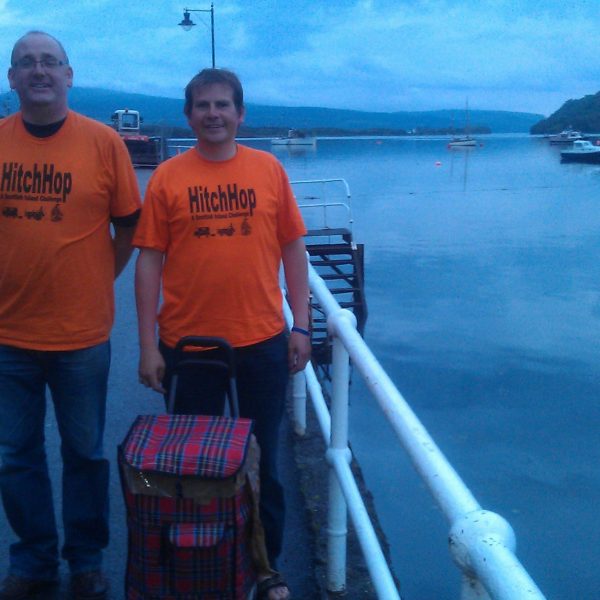 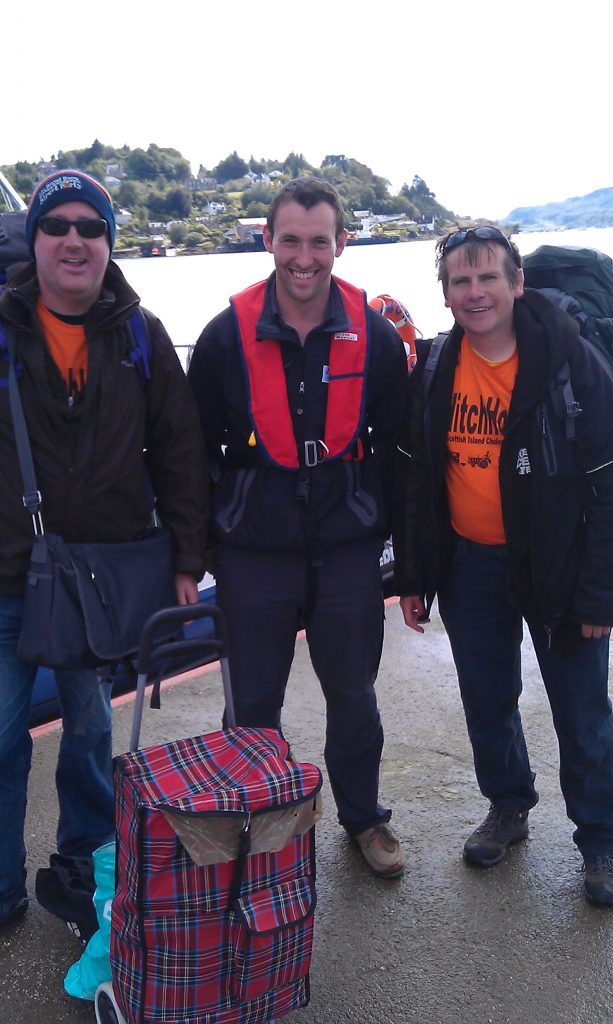 “It wasn’t long until we were back in Oban, with about 3 hours to spare till the ferry left for Oban.  We put our bags in the train station lockers (very cheap – and well worth remembering!) and headed to the nearest cafe for a bit of breakfast.  The cafe was full of older people and we were surprised that we were the only one with a shopping trolley bag (Thomas) with us!

Thomas sat in the shopping trolley, which I found very amusing, as if he was a child sitting in the front.  I was told off by the security guard taking a photo, being told “No photos are allowed to be taken in Tescos”!”. 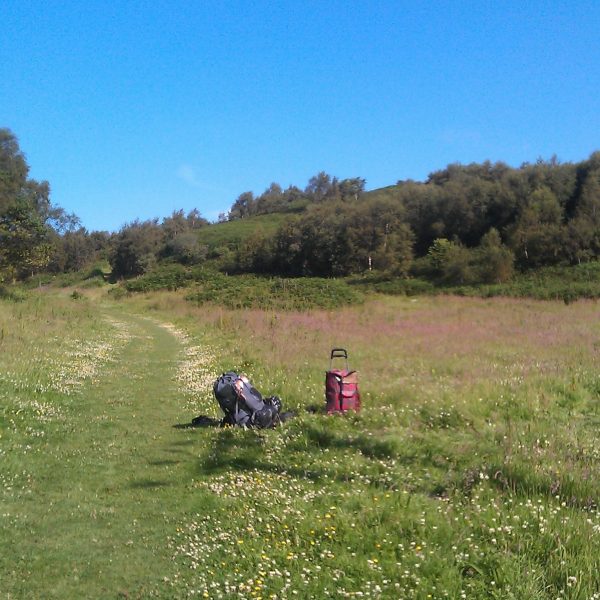 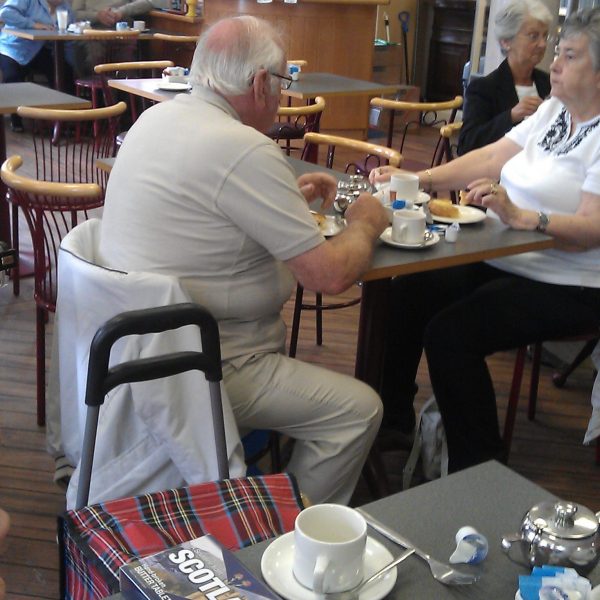 Today, I dug Thomas out of the back of my wardrobe, dusted him down and decided to take him on my walk with Honey the Dog.  I wasn’t quite sure what Honey thought of him, but I explained to her that he was my ‘pretend dog’ before she came along 🙂

It was pretty windy so he struggled to stay up, as he wasn’t carrying anything, but I think he had fun! 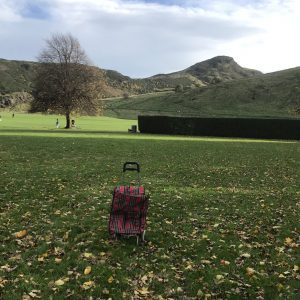 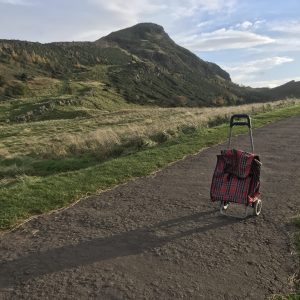 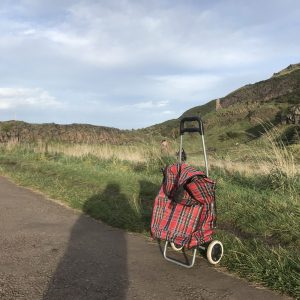 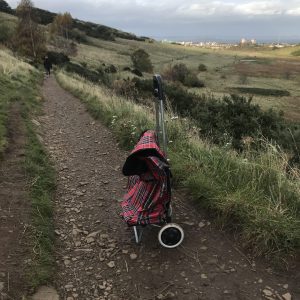 We stopped at times to give him a rest. 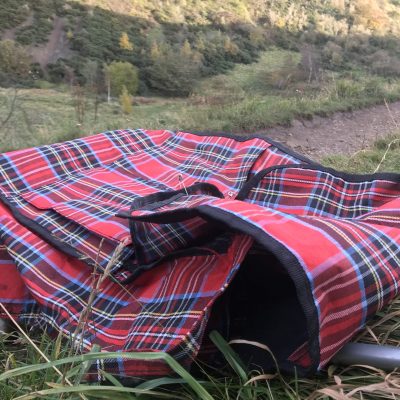 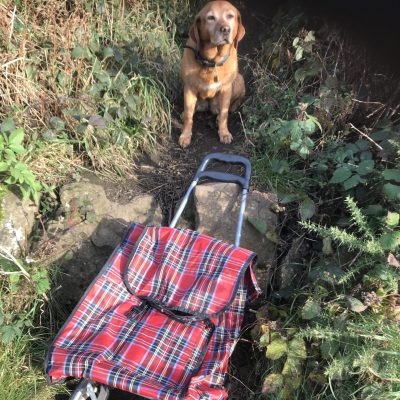 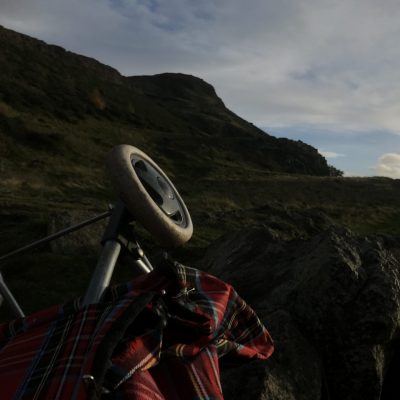 But I think he had a good walk ! 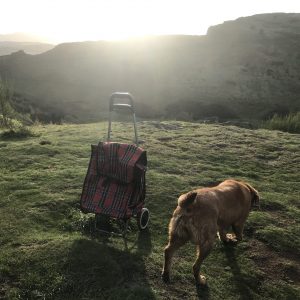 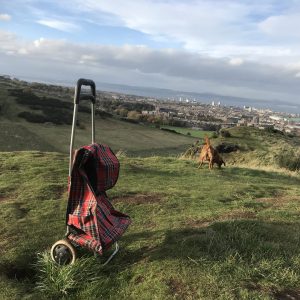 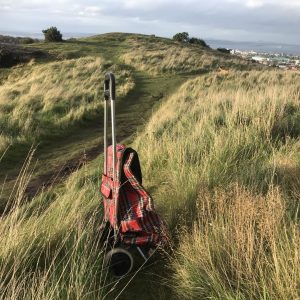 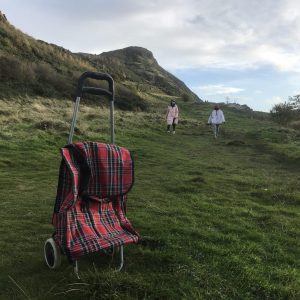 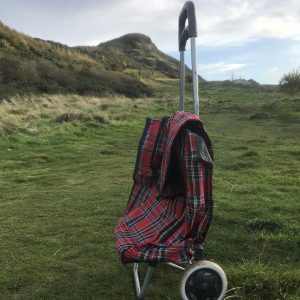 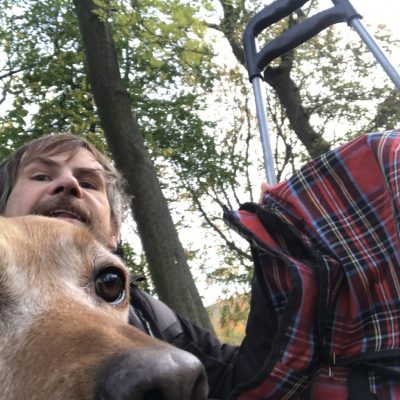 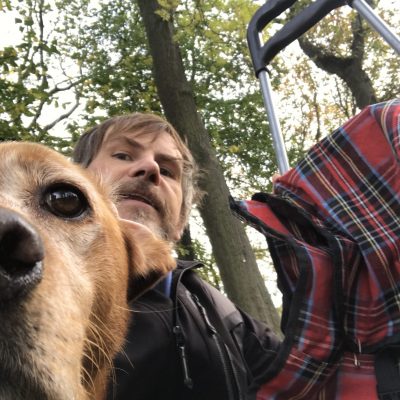 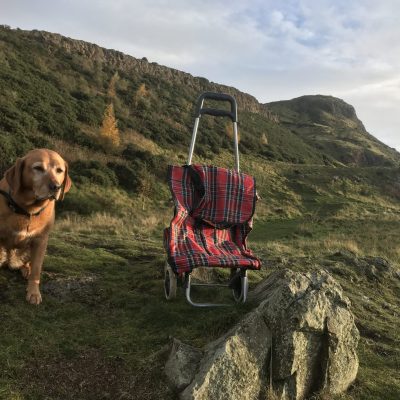 PLEASE – GIVE THOMAS A NEW HOME

I am sure, like everyone else, you have now fallen in love with Thomas.

His side is still ripped and held together with safety pins, but as you can see from today’s photos he still is looking great.  He no longer has a survival bag attached inside him, but with a sewing machine, you can bring him back to his glory days.

I think the reason he split during HitchHop was because he was carrying too much weight, he was stuffed full with bottles of whisky, chocolates, biscuits, t-shirts – you name it, he had it, for the raffles.  But generally he has a sturdy bag and I am sure has many years left in him yet. 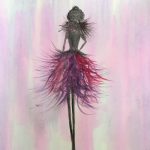 Anna sent me a message this evening about my yesterdays blog (Day 215), giving me the answer on why the clocks went back last night, when usually it is at the end of October.  She said:

“Clocks go back on the last Sunday of October. Next Sunday is 1 November so it is not a week early this year!'”.

Thanks Anna!  I never knew that… 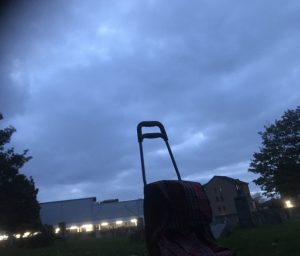 As I come to the end of this blog, I am feeling wide awake at 11.45pm, is that something to do with the hour change?  Honey and I slept through to 9am (new time), which meant I got 9 hours sleep 🙂

So a slightly different blog today, but hopefully tomorrow my inbox will be full of offers to take Thomas!  If that is the case, we could have an auction and give the money raised to the RNLI?  He is actually very light, so although a bulky package to send in the post, I am sure I can find a courier to take him.

You may have noticed that every photo in this blog today, has Thomas in it!

Today the weather has been sunny most of the day, a slightly colder day compared to yesterday, but still pretty warm.  Although, it was windy on Arthur’s Seat.

I hope you’ve had a lovely Sunday.