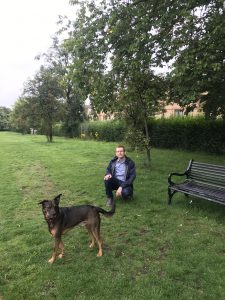 It’s been an interesting day, I’ve spent most of it clearing out my spare room and sorting through all my stuff.  My energy levels are still pretty good, not as good as yesterday – I was super active and quite “high” yesterday 🙂

This morning, I didn’t wake up until 07:50 and although I could have squeezed a run in before Morning Chi Gong, I decided to have a lie in instead.

On our morning walk, Honey and I bumped into Hamish and Danby – Danby is the dog, Hamish is the human 😉

I first met Hamish doing magic, I think.  I think it was The Old Chain Pier.  Then I saw him again at Renroc and we talked about meditation.  It must have been leading up to lent, because we agreed to try and mediate everyday during lent and then meet every Monday morning in Renroc to check-in on how it was going.  I don’t think we stuck at the daily meditation that long, but was great to get to know Hamish.

Today, as always in lock-down, at the start of the conversation, we chatted for quite a while about lock-down and how its been for both of us.  Hamish liked the idea of my blog, saying that in generations to come it will be a source of information to get a glimpse of how we all lived through this pandemic.  He quoted the Great Fire of London and how researchers have waded through accounts of living through that.

I kind of like the idea that this blog, may one day be used for people to get a glimpse of what we are all going through! 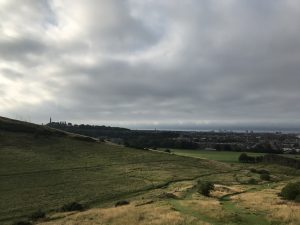 Hamish also talked about his recent trip to Surrey, he said there were loads of people playing in the River Thames.  He said he’s been there before, but never seen so many people playing around in the Thames -swimming, playing on makeshift swing ropes, etc…We reflected on why that was.  I wondered, that perhaps people have got sick of staying at home playing games, living virtually, etc…and so now lock-down is eased and they can get out – and they are.

It reminded of when I was growing up, we would always be outside, finding ways to make things and play.  I guess, a lot of that has got lost due to computer games, Netflix, etc…

Its great to think that lock-down is creating this environment again.  People are discovering playing together, having fun together, being creative together to have fun.  Connecting together IRL (In Real Life).,

We both commented that there are so many more people in parks in Edinburgh, many more than previous years.  I guess as life has been so much living virtually, now that we can connect in real life, we are doing it. 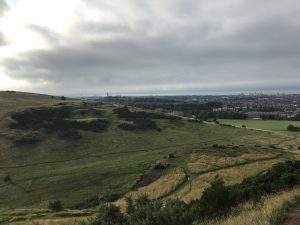 Hamish wondered whether this will continue or whether it will get lost once the pandemic is over.  Whilst we live not quite knowing if we will be back in lock-down sometime soon, we are all taking advantage of being outside in the real world.

Hamish also talked about children going back to school and how he thinks its really important.  He lives with his wife and children and says it has become pretty hard at times during lock-down, all in the house together.

It’s totally true, perhaps that is why the government is pushing so hard for children to get back to school?

Over the last couple of weeks or so I’ve seen these two pictures on billboards on Easter Road and have wondered what they are about.  I did an internet search and found they are part of the Edinburgh Art Festival. 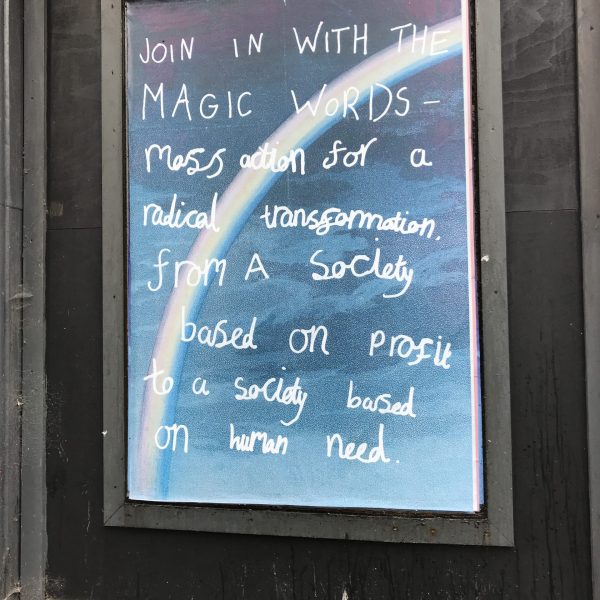 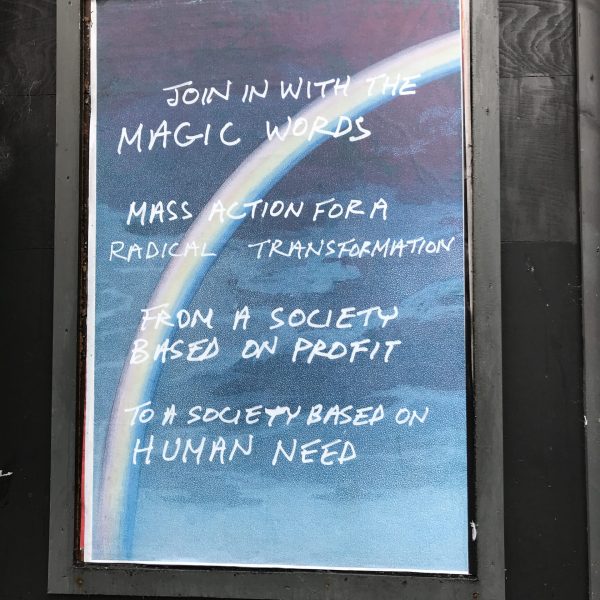 It is part of Ruth Ewan’s revisiting of Sympathetic Magick which I was part of in 2018.

Back in 2018, I worked with Ruth Ewan to put on a magic show with a political edge.  I wrote, developed and performed a show called ‘Madness; Reality or Illusion‘, which I was putting on tour for this year, which has been postponed until next year.  I already performed the show at a GP Conference and have it planned to be performed at a mental health conference in Exeter and in Boat of Garten.  Check out my flyer for the show – https://www.beyondbeliefmagic.co.uk/edinburgh-festival-fringe/madness-reality-or-illusion

Here is more information about what Ruth Ewan is doing this year – https://www.edinburghartfestival.com/whats-on/detail/ruth-ewan-magic-words

This evening Honey and I went on a walk with Hannah.  Last time we went for a walk together was Day 128, when we went to the Sheep Heid.

I hear from Hannah, that when she walks Honey, when I am not there, she often lets Honey lead the way,following Honey’s route.  This is what we did today. 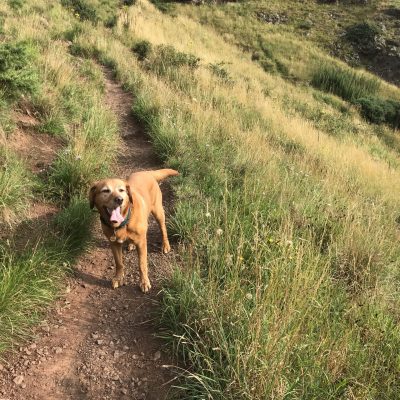 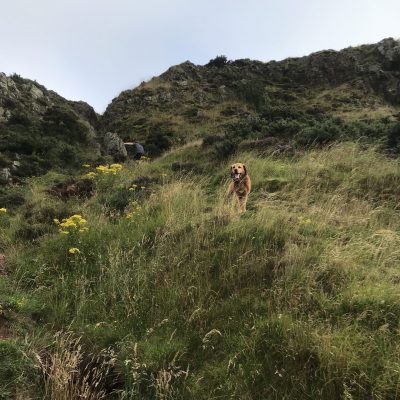 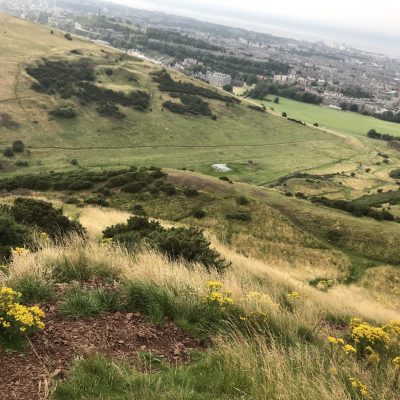 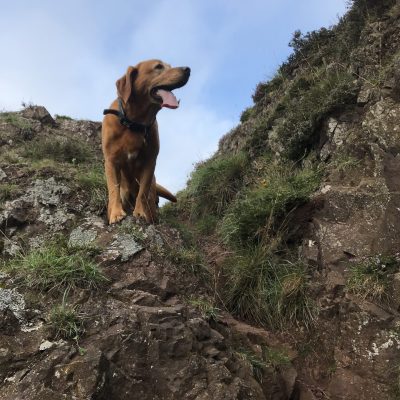 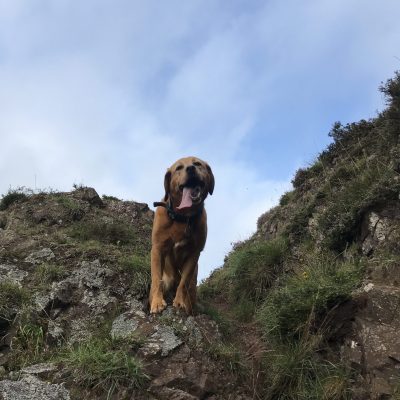 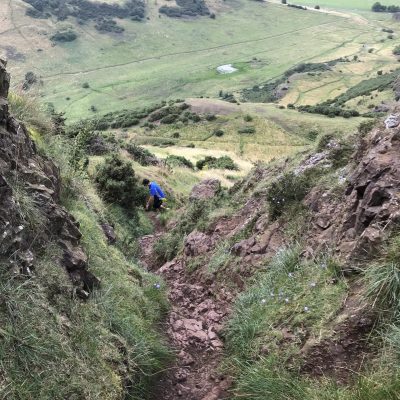 We finally got to the top of Arthur’s Seat.  It was busier then it was when we were there last time on Day 88. 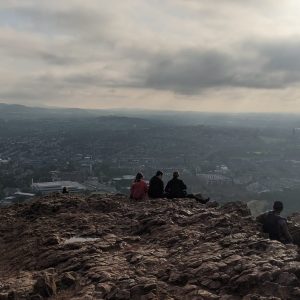 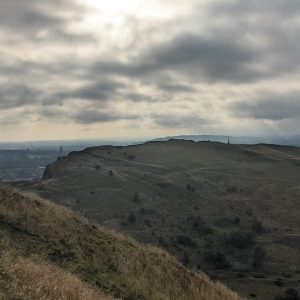 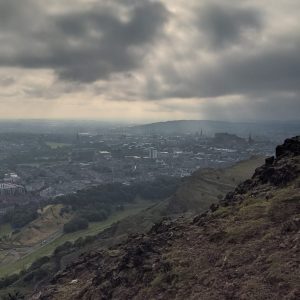 We then headed down to the swan lake to see the signets, which are now pretty much swans.  We first saw the signets on our walk on Day 88.  There were 6 signets then, now there are only 5 🙁 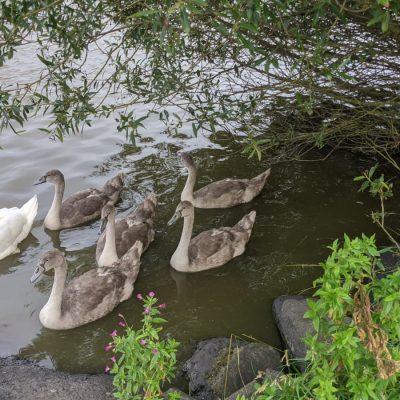 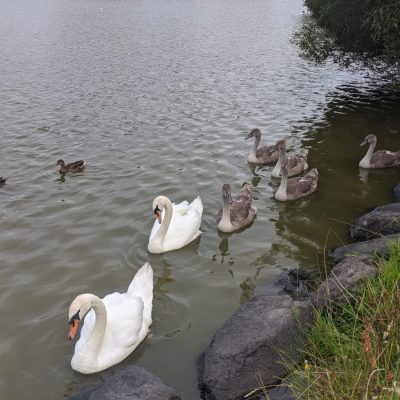 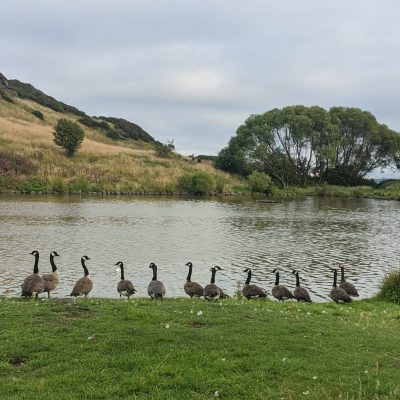 Was great to see Hannah and catch-up – and have some company on our walk on Arthur’s Seat.

Another painting from Anna today.

Anna discovered The Paint Republic during lock-down.  You can access free paint-as-you-go classes via their website or Facebook page.  Or you can join for £5 a month to access over 60 classes!  All online (virtual) rather than real world. 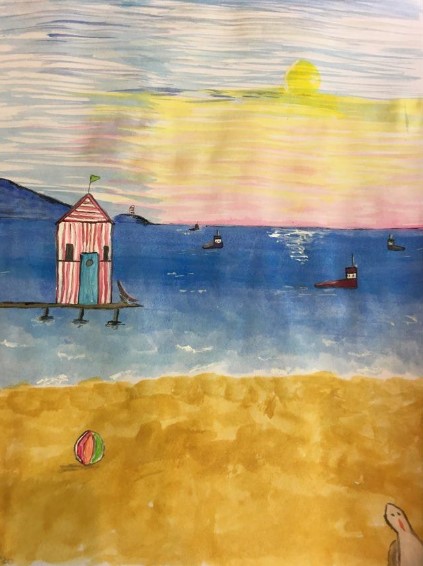 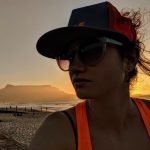 Today on our walk with Hannah, she told me she had recently posted a blog herself, so thought I would include it here!

She said she wrote the blog, as it was her 1 year anniversary on 10th August when she climbed up a volcano and along the ridge!

It’s a great read and if nothing else, check out the video near the bottom of the blog, which shows her walking along the ridge!  I’ve also included it below.  But check out the blog for the full experience and back story.

The blog is called ‘Big Bad Mount Bromo and the glorious futility of hindsight – https://thelostscot.com/2020/08/10/mount-bromo/

Thanks Hannah, scaling up Arthur’s Seat must be a breeze compared to that volcano 😉

I’m starting to forget what I have included in here!

Anyway, this made me smile (hope I haven’t shared it already)! 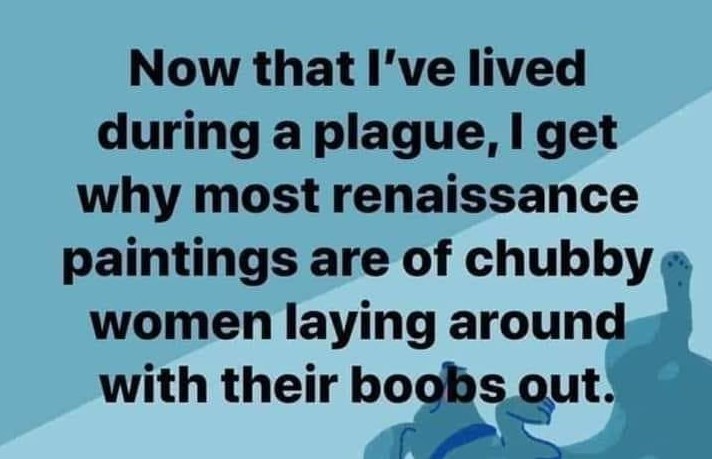 Hannah was explaining to me about how Spotify works, she is also a Spotify user.  So I look forward to seeing one of her playlists soon 🙂

I think I will cancel my Disney+ subscription and sign up to Spotify, if nothing else it means I can start including my playlists in here too!

I’ve been listening to Helen’s playlist from yesterdays blog (Day 142) all day and am listening to it again now!

So today, its me again sharing something for Music Corner.

I love this.  I first heard it when staying at Fi’s at Tighard in Canna.  As I play the piano, I find this particularly moving.

It’s Angels from the Ashes by Runrig & Paul Mounsey. 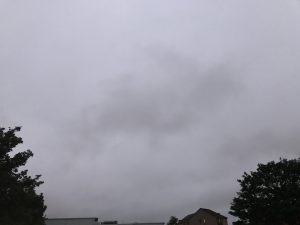 As I come to the end of this blog, it is later than I hoped, not far from midnight.  My early to bed on Monday and Tuesday has slipped.  I’m doing a magic lesson on Saturday, so I will need to go to bed early tomorrow night to make sure I am up early for a long walk with Honey so she sleeps whilst I am away.

It’s been a good day, some relaxing time, some time sorting out my flat, lots of exercise and hanging out with Hannah.  I am starting to settle into my Detox, now on Day 4, although still got a pint of water to drink before bed.

The weather has been cooler today and mainly cloudy.  Although I was still out in shorts and t-shirt, but I think I am hoping the hot weather will return 😉

This evening, Honey and I didn’t get out until 9.15pm for our bedtime walk and it was pretty dark – where as the lightness at night gone?!

Hope you’ve had a good day.

“Hired Jim for a birthday party and he was excellent. Enjoyed by all guests and thoroughly entertaining.”