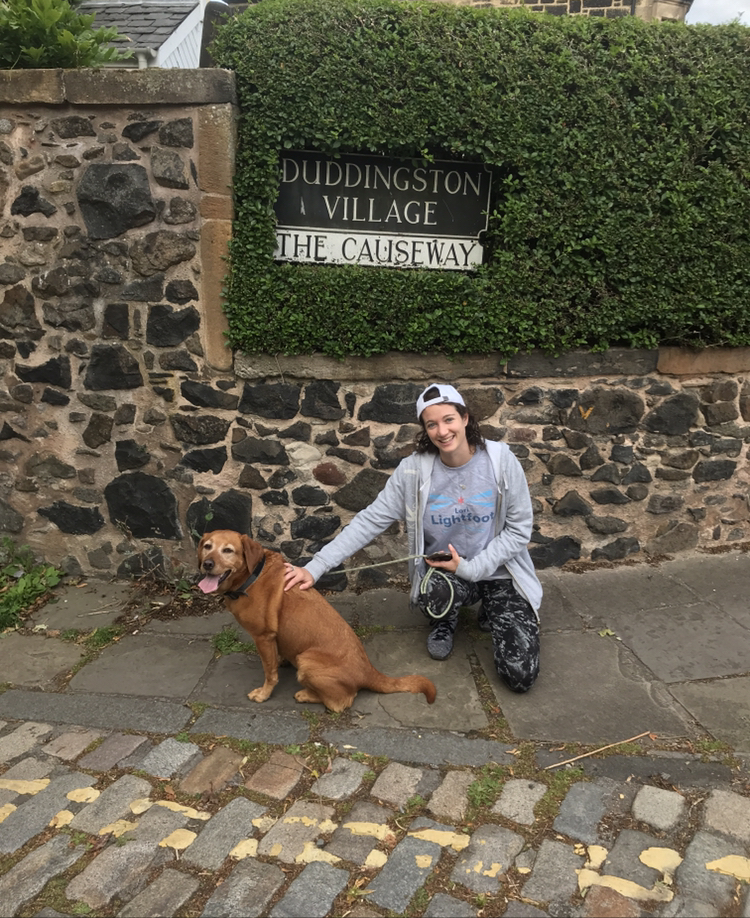 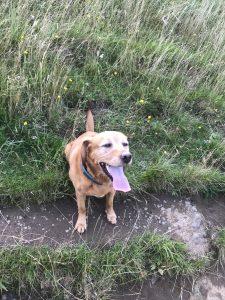 When you say to people in Edinburgh that you are going to ‘The Innocent Railway’, they usually associate it with the 518 metre long tunnel.

However, the Innocent Railway is actually 9 miles long.  It was Edinburgh’s first railway line, constructed from 1827 to 1830, used by horse drawn trams bringing coal from the mines from the south to Edinburgh.  It opened in 1831 as the Edinburgh to Dalkeith Railway Line and was the first underground railway passage in the UK.

After the coal depot in St. Leonard’s shut down, the railway ceased to operate in 1963.  In 1981 it was reopened for use as a pedestrian and cycle path, one of many in Edinburgh which is part of the UK National Cycle Network Routes.

I must admit, for me, the tunnel is the most spectacular part of it.  I have heard of raves and parties taking place in it in the past.  It has some amazing graffiti and I’ve seen some awesome photos of people doing fire spinning in it.

The entrance to the tunnel is hard to find, unless you know where to look, kind of hidden between some houses.  But once you’ve found it, the tunnel is spectacular, going under part of Arthur’s Seat!  It was originally lit by gas lamps, although now is constantly lit by electricity.  Although a few parts the lighting is not working and so you are in near darkness.

Why do I mention this?

It’s a pretty spectacular tunnel, over half a kilometre in length.  Hannah was wondering why it is called the ‘Innocent Railway’.

On the research I found, it was to reflect the “genteel image of the horse-drawn railway compared with the ‘dangerous’, all-hissing, all clanking steam engines of the modern age”.  Although other research suggests it was named this due to there being no casualties during the building of it.

Read more about it:

And the photos here: 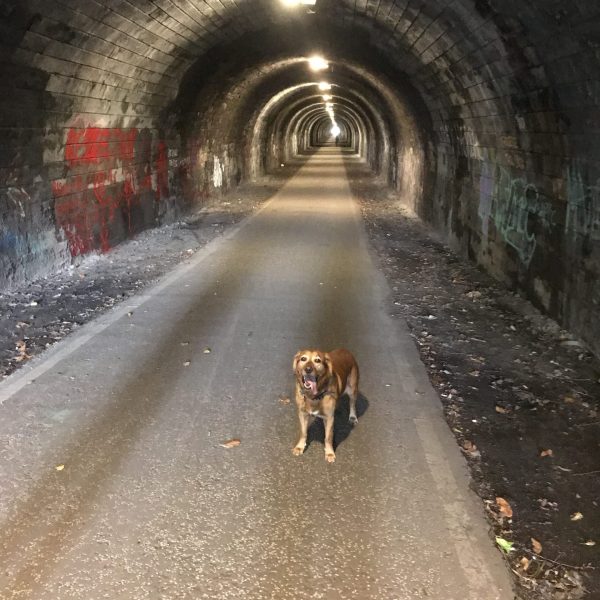 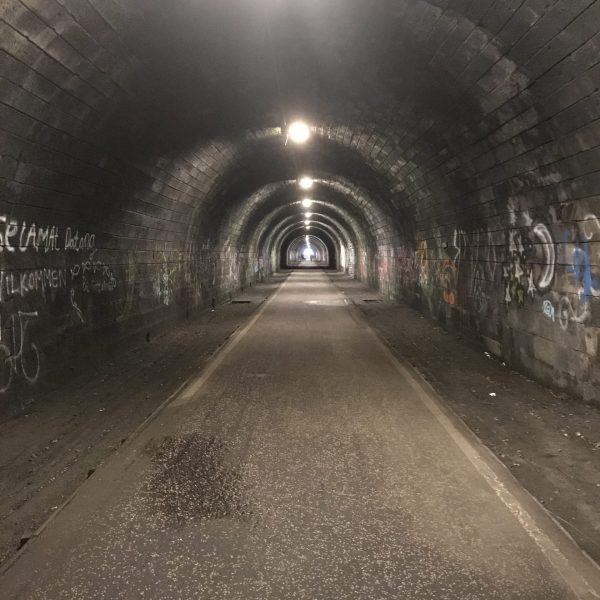 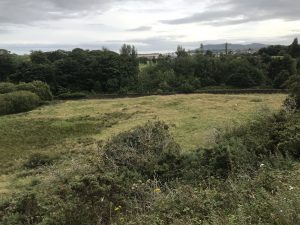 After leaving the tunnel, we heading along the cycle path/walkway of the Innocent Railway.  Passing a couple of sheep on the field on the left.  Honey smelt them and jumped up on the wall to look at them, but she jumped down when I called her back – phew!

After a short walk along a busy road, you head down into Duddingston village.

Despite being in Edinburgh, Duddingston really does feel like a village.  Hannah and I commented how it was hard to imagine that we were in Edinburgh.  The peace and quiet of the small cobbled roads, many grand houses and the trees and wildlife.

Situated at the bottom of Arthur’s Seat. It has been settled in since the 12th Century.  Once a busy weaving centre, it produced a coarse linen cloth known as ‘Duddingston hardings’.  Duddingston Kirk also dates from the 12th Century, with the fine romanesque doorway and chancel arch still remain, and outside the gate there is a 17th Century ‘loupin-on-stance’ to help horseman mount, and ‘jougs‘, a punishment collar. 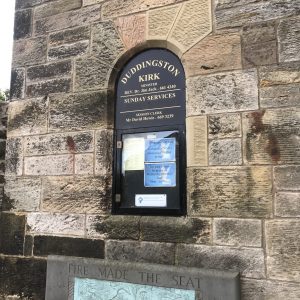 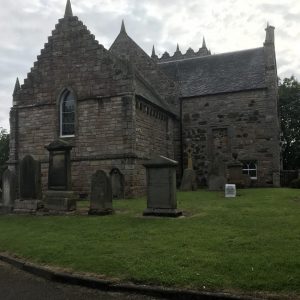 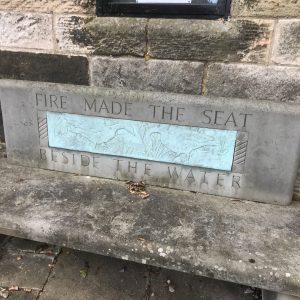 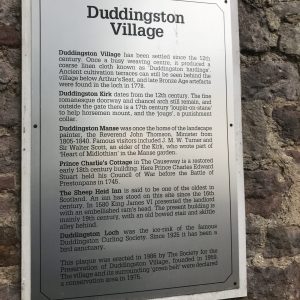 The Duddingston Manse was once the home of the landscape painter, the Reverend John Thomson, Minister from 1805-1840.  Famous visitors include J.M.W. Turner and Sir Walter Scott, an elder of the Kirk, who wrote part of ‘Heart of Midlothian‘ in the Manse garden.

Duddingston Loch was the ice rink of the famous Duddingston Curling Society and ice skating on the loch in the 1920s.  Since 1925 it has been a bird sanctuary. 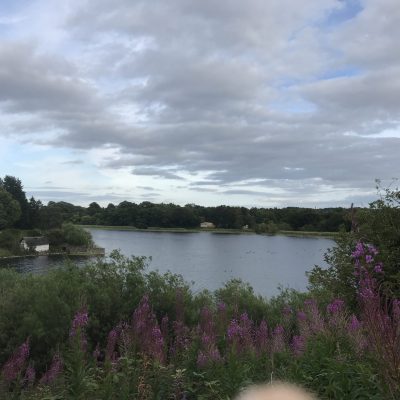 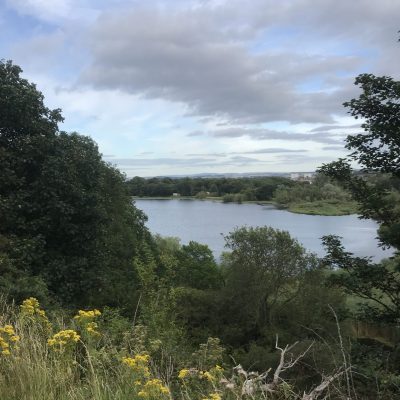 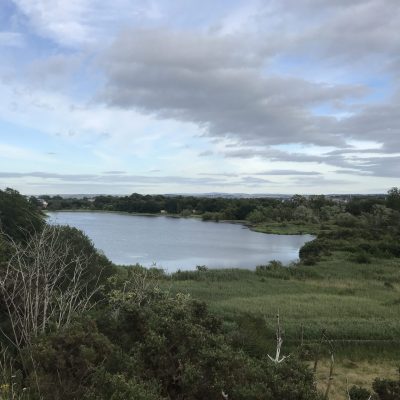 Hannah had never been to Duddingston before, so it was good to have a look around and explore.  She had also never been to the infamous pub there ‘The Sheep Heid Inn‘ which is said to be one of the oldest Inns in Scotland.  An Inn has stood on the site since the 16th Century.  In 1580 King James VI presented the landlord with an embellished ram’s head.  The present building is mainly 19th Century, with an old bowed stair and skittle alley behind.

I used to come to the ‘Sheep’s Heid’, as I know by, every year for my Birthday.  The lovely walk through Arthur’s Seat and the skittle alley, which you can hire out.  With delicious food and great beer, what a perfect place for a Birthday Gathering. 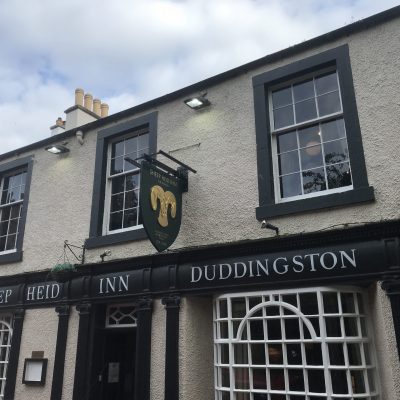 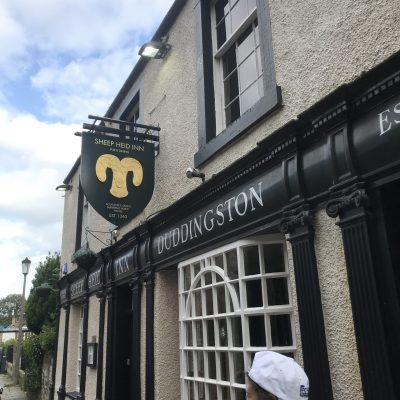 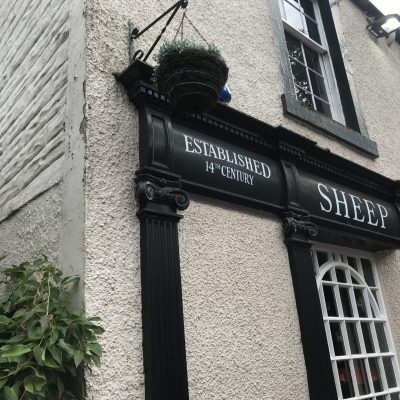 So Hannah, Honey and I had planned this trip to go to the ‘Sheep’s Heid’.  My first pub visit since lock-down, in fact 12th March, my second last magic gig.

As we arrived we were told to use the alcohol gel and scan a QR code and complete the online form for track and trace.  We were told, everything was table service and told where the toilets were.  It felt like we were being instructed not to venture from our seats, unless we wanted to use the toilet.

When we discussed going here about a month ago, I envisaged having a pint with Hannah on this momentous occasion – Hannah’s first visit and my first pub since lock-down!  But when arranging with Hannah a few days ago, I decided not to drink a pint.  But last night, I thought it would be a shame – so we had a half pint instead and some food.

As dogs are not allowed in the bar, we sat outside the back in the ‘beer garden’ area.

Was a lovely evening, before heading back home. 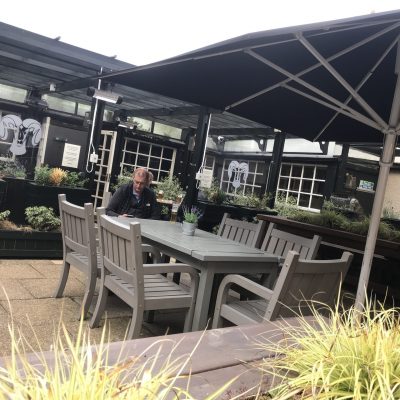 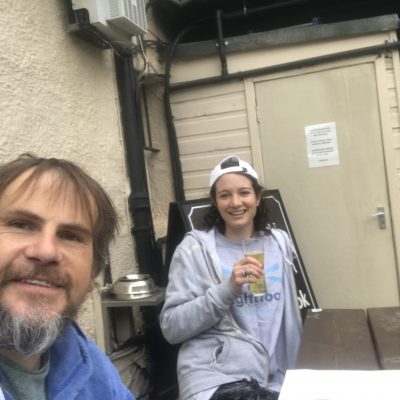 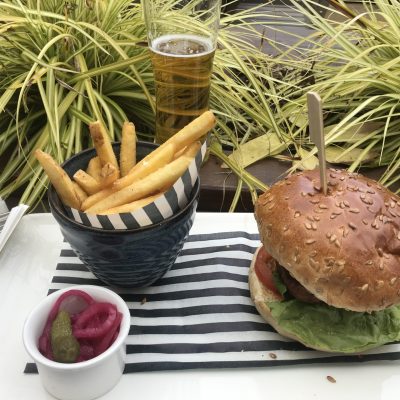 On the way home Hannah talked about how in other pubs she has been into since lock-down that her and her friends find it hard to hear so well when there is chatter in the background.

She suggested this is because since lock-down, we are used to talking to people at home, where there are not lots of people.  We have lost the ability to zone out the surrounding chat of other people.

Is this another example of something we have lost due to ‘muscle memory’? 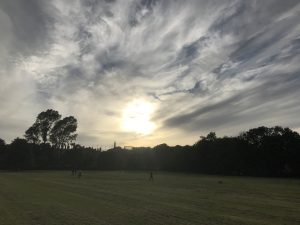 Another painting from my sister, Anna, who discovered The Paint Republic during lock-down.  You can access free paint-as-you-go classes via their website or Facebook page.  Or you can join for £5 a month to access over 60 classes!  All online (virtual) rather than real world.

This one she says she is part way through painting it: 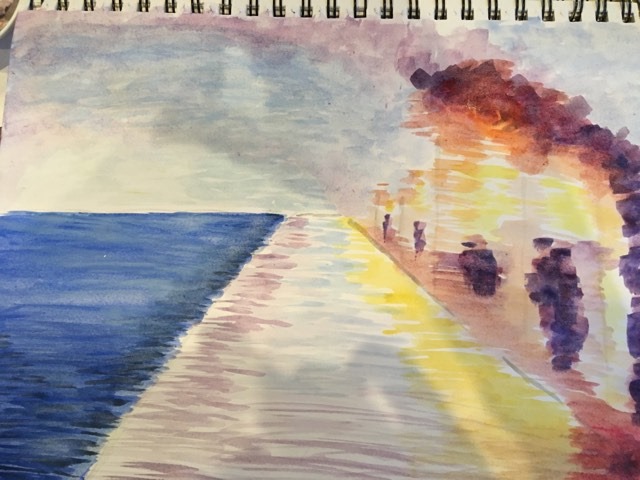 With lots of submissions today for ‘It Made Me Smile’, but none for Readers Corner, I am included this here! 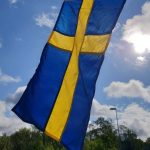 “This made me smile

And reminded me of the conversation we had about periods of silence (awkward or otherwise).”. 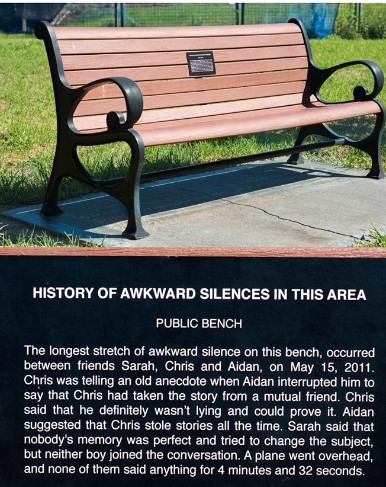 Helen also included the rest of the article here –https://mymodernmet.com/michael-pederson-clever-street-art/

Thanks for this Helen!  I think it is very apt to fit into what Hannah was saying.  Have we got used to silence in lock-down?  Silence in the streets – silence from not talking to lots of people in a group – silence from the noisy chatter in pubs.

Perhaps we have got more used to ‘awkward’ silence?  I certainly have spent most of my time on my own during lock-down and not spoken to anyone, except through Zoom.  And of course in Zoom, we can’t talk over one another! 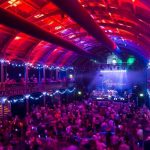 “Absolutely love when these things happen. Back in 2006 after the 2nd Jan ‘Hogmanay Dance’ in Acharacle we went down to Loch Shiel and threw this bottle and poster from the dance into the water hoping it would sail around the world. After 14 years and possibly bobbing around St Finan’s, or the Green Isle, about 40 times, it washed up on the shores of Acharacle once again this week and was passed on to the locals. Brilliant craic. PS now we’re in 2020, please dispose of your glass responsibly 🤪😂🤣”. 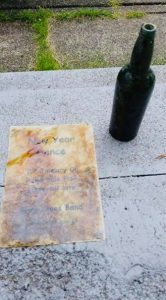 This certainly made me smile!

It reminded me of something similar when I was on a PGL holiday.  The holiday was a week sailing on a ship, the Thalatta!  Near the end of the holiday, we did just this.  Wrote a message, put it in a bottle and threw it off the ship.  The message said, if you find this, please get in touch.

About a month later, I got a letter from a young boy, who had found the bottle and message.  It had drifted about 50 miles or so and had been washed up on a beach!

What a lovely thing to do and to find 🙂

I missed this today, so 50 push-up tomorrow!

Hannah was giving me tips on how to build up stamina doing push-ups.

So once these Post-25 are finished, I may bring this section to the end? 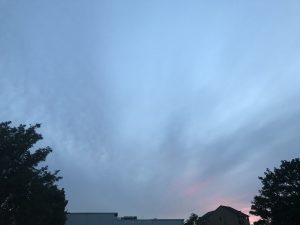 As I come to the end of today’s blog, I am still feeling tired, it seems like this whole week I have been tired! 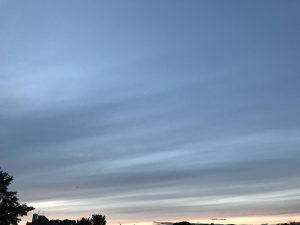 Its only a matter of time until I sleep through and miss Chi Gong completely!

And of course, it was great to hang-out with Hannah 🙂

Despite the anxieties of going into a pub, I felt very virus safe.  I felt the staff were very thorough and looked after us.  I wonder, how I would have felt if all that was not in place – and I wonder how I will feel when I go to a pub, when this is not the case?  Will I walk out and not stay?  It will be interesting to see.

Tomorrow, I have two gatherings with two different sets of friends arranged and maybe a third!  All this lock-down easing is exhausting, but I am loving it!

Today, the weather was warm with some sunshine.  I walked to Duddingston and back in shorts.  I must admit it was a bit chilly on the way home – but survivable!

Don’t forget the BBC Alba Documentary tomorrow  (Thursday) at 9pm about the Isle of Canna.  It looks awesome and Fi is in it too – https://www.bbc.co.uk/programmes/m000lcbm

Thanks for your continuous support reading this blog.