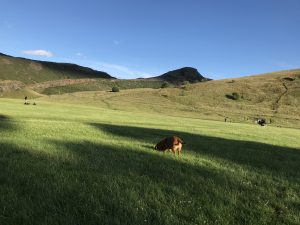 Today I have been feeling really tired and concluded it was spending time with lots of people yesterday!

I remember writing in the early days of lock-down, how spending so much time on my own, I realised that I was connecting more to myself inwardly and how when we are with other people we give out so much energy.  Not even speaking to people, just interacting with them, leads to giving lots of energy.

This, I think is what happened to me yesterday.  I leapt from spending most my time on my own, having only been with 2 people since lock-down began 112 days ago to being with about 10 people!  The amount of energy I must have given out from interacting with so many people must have been massive!  Instead of taking things easy as I transitioned out of lock-down, I jump straight in.

I did have a fantastic time and would not want to change that, but notice how draining it was.  Something I was never really aware of before lock-down, how much energy we must give on a daily basis just being with people!

Today I found out that the family run business Henderson’s has shut down, due to Covid-19.  This makes me very sad, it has been an iconic vegetarian bistro/restaurant (I think that’s what they called themselves) in Edinburgh, trading for 58 years!!  The main one was on Hanover Street, in the middle of the 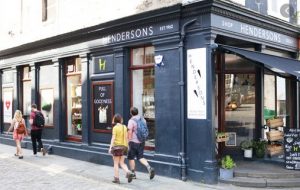 city centre.  They had one on Lothian Road for a while (beneath St. John’s Church) and more recently opened one on Holyrood.

The first shop/deli opened in 1962, driven by Janet Henderson who 30 years earlier had discovered during her travels in Europe about the benefits of organic and vegetarian diet.  She and her husband Mac, then brought this to life in their farm with an organic market garden in East Lothian.

As Covid-19 took hold in February/March 2020, they were just coming out of the quieter winter months, looking forward to Easter, summer and Edinburgh Festival trading.  The Government’s resistance to close hospitality business’ until late March meant that by this time their restaurant and deli closed, but had lost a serious amount of money.  The furlough scheme was a life-line for their 40 employees.  But still had essential fixed operating costs, insurance, rent, utilities, etc…every month and so became unsustainable. 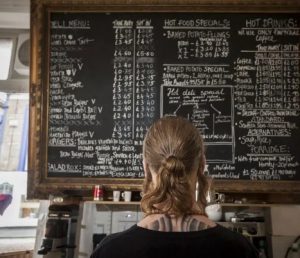 They provided a food/vegetable box delivery click & collect service in more recent times of lock-down, but being in the city centre, which has been so quiet, just didn’t help, no tourists or office workers.  So they have decided to close.

Years ago, I went to talk by the son of the the couple who set up Hendersons (I guess Janet & Mac).  He said, that Mac was not a vegetarian, even though he ran this vegetarian business.  But, thought it was a great idea for a business, because there was no vegetarian restaurants or bistros in Edinburgh.  In fact, there were no bistros.  Which is why it took off. 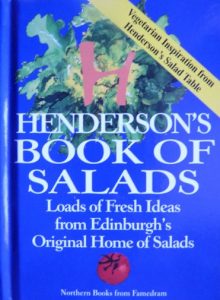 During this talk, we went round the room and asked if we were vegetarians or not.  One girl, said she had been a vegetarian all her life, but had recently fallen off the vegetarian wagon.  Her mum, had bought her up as a vegetarian.  But now, in her mid-20’s, had slipped into eating meat and was having like 10 sausages for her dinner and was loving.  Her mum had said it was “a phase” that she was going through.

I bumped into the girl a couple of years later and asked if it was “a phase”, she replied saying “NO” – she was still eating meat!

I posted the story of Henderson’s shutting down on Facebook and a friend of mine commented saying although he loves going to Starbucks for coffee, he is now going to support independent shops and cafes.

This I hope is one positive thing that will come out of all this – people will start to realise that buying food from independent shops and cafes is the way we are going to save our communities!

I am coming to the end of my poetry that I wrote during my mental health nurse training.  This is the second last one.  After that, I will have to find a new section 🙂

I wrote this poem when I was in Amsterdam in September 2001.  It was a couple of days before September 11th and the twin towers attack.  In fact, I flew back from Amsterdam the day it happened, we watched a tower collapse on the TV in the departure lounge.  We were the last flight to arrive back in Edinburgh, before UK airports closed.

But this poem was written before that.  I had decided to write 40 postcards to everyone I could think of.  I was nearing the end and was getting tired of writing them, so when it came to my friend Mark’s postcard (the same Mark associated with the poem ‘The Student’ back on Day 99).  I decided to write a poem to sum up my experiences.

This is the poem.

Bars, Coffeeshops, Hostels, Trams,
Libyan’s, German’s and Americans.
We meet, chat, connect and enjoy,
Floating in the world of dreams.

Books, Films, Bikes and Parks,
Chinese, Irish and Dutch.
We eat, drink, chat and chill,
Uniting in the world of love.

Canals, Water, Beer, Rain,
Young, Old and Children.
We float, sleep, listen and rest,
Relaxing in the world of life. 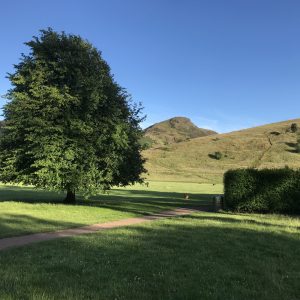 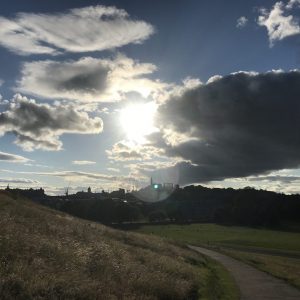 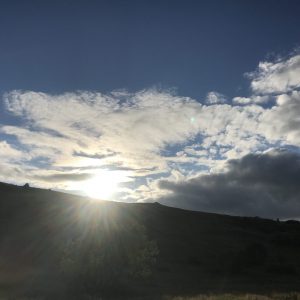 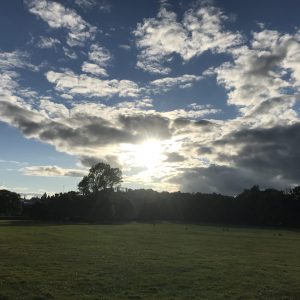 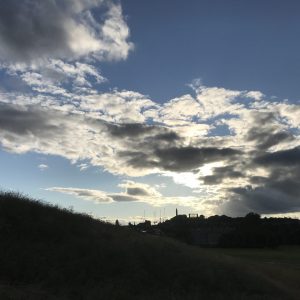 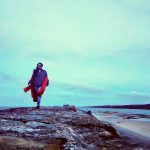 Another one from the archives of Jennie’s writing…

It’s been an interesting experience so far. Not usually so used to be this visible on social media every day but have been finding it kinda therapeutic to make these little videos! 🙊😯

Nominating and dedicating today’s push-ups to Rebecca cause I love and miss her very dearly. Can’t wait to sing this song with her again soon!! ❤️⛰🎶

Miles sent me a message this morning saying,

“Jim, have you read the book “Lost Connections” by Johann something?

It seems to align a lot of your thoughts about connection and disconnection and also explores from many angles failures of our mental health systems, and the common practices in them.”

Thanks for this Miles, I haven’t read it.  But found it on Amazon – ‘Lost Connections: Uncovering the real causes of depression – and the unexpected solutions’, by Johann Hari.

I see that it is on Amazon Audible, I’ll download it and listen to it whilst walking Honey the Dog 🙂 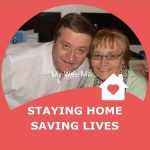 “Great Read..Never Be Nervous About Meeting New People You Have A Lot To Offer And Are One Of The Nicest People I Know “”For An Englishman””😉😉😉 Stay Safe and Stay Well My Friend…☘️☘️☘️☘️”

Thanks Pat for the compliment (kind of)!

This made me smile!

I decided to continue with 25 push-ups a day and make a wee video too.  I quite enjoy the videos I have been making and impressed I am getting good at push-ups.

This video has not appeared on Facebook, it is exclusive to the blog! 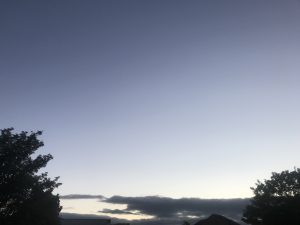 As I come to the end of today’s blog, I am feeling tired!

I am feeling sad, that Henderson’s has shut down and wish that I had gone there more often.  That’s interesting, when you lose something or know something is ending, you wish that you appreciated it more, until it is too late!

I’m quite pleased with the action shot of Honey jumping, which is the main photo of this blog.  I snapped it just at the right time.  Although, it was set up!  She always jumps that part, so I got her to sit and wait until I was in position for the photo and then called her 😉 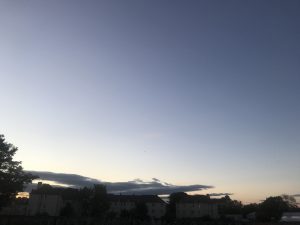 It’s been sunny, with some cloud, but quite breezy, so not super hot.

This evening another sunset.

Despite, feeling really tired, I have been feeling a lot more content with life today, which I realised is probably due to spending time with some friends yesterday and making some new friends.  In fact, just the social interaction with them!

So although, I have really enjoyed being on my own in lock-down I am appreciating so much more time with my friends (in the real world).

It will be interesting to see how this progresses in time.