Last night I performed at my 10th Christmas Party!  Like all the others – it was awesome!  December has been super busy for me – the busiest month of gigs I’ve ever had – which is fantastic as I am now a full-time magician!

I so much love performing magic and bringing that wow factor to so many people’s lives – so the last 3 weeks has been so much fun – and everyone who has seen my magic has loved it!!

So a big thank you to everyone who booked me and saw my magic, from Darlington to Dunfermline to Glasgow to Edinburgh and all the parties in-between – its been a blast!

In addition to that I have also been doing magic in some Edinburgh Bars and going to The Pitt Street Market every Saturday – which has been super cold most Saturday’s – but still lots of fun and space to practice new magic.  However, The Pitt has now taken a break till February.

In the middle of November, I headed to Glasgow for an audition for Britain’s Got Talent.  This was an audition in front of the producers, there was a lot of waiting around – so it wasn’t long until I was entertaining the production crew and others auditioning.  Sadly, I have not got through to the next round, which would have been in a theatre, in front of the judges and the TV Cameras.  But hey-ho, maybe next year.

And my magic work doesn’t stop there – I am performing tonight at The Bongo Club in Edinburgh – it’s the club night Headset’s 3rd Birthday – and I have been invited to perform for a wee while.  Only £3 to get in – I’ll be there from 0:00 to 01:30. 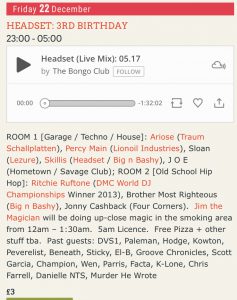 I am then taking a few days break for Christmas.  Then onto hogmanay in Edinburgh.  I am performing at Akva (129 Fountain Bridge, EH3 9QG) from 9pm onwards.  It’s a 1920’s night – I don’t know the details – but will keep you posted.  I am performing there from 9pm.  .

It certainly has been the busiest month I have ever had performing magic, but I have loved every bit of it.

Wishing you all a Merry Christmas and a Happy New Year.